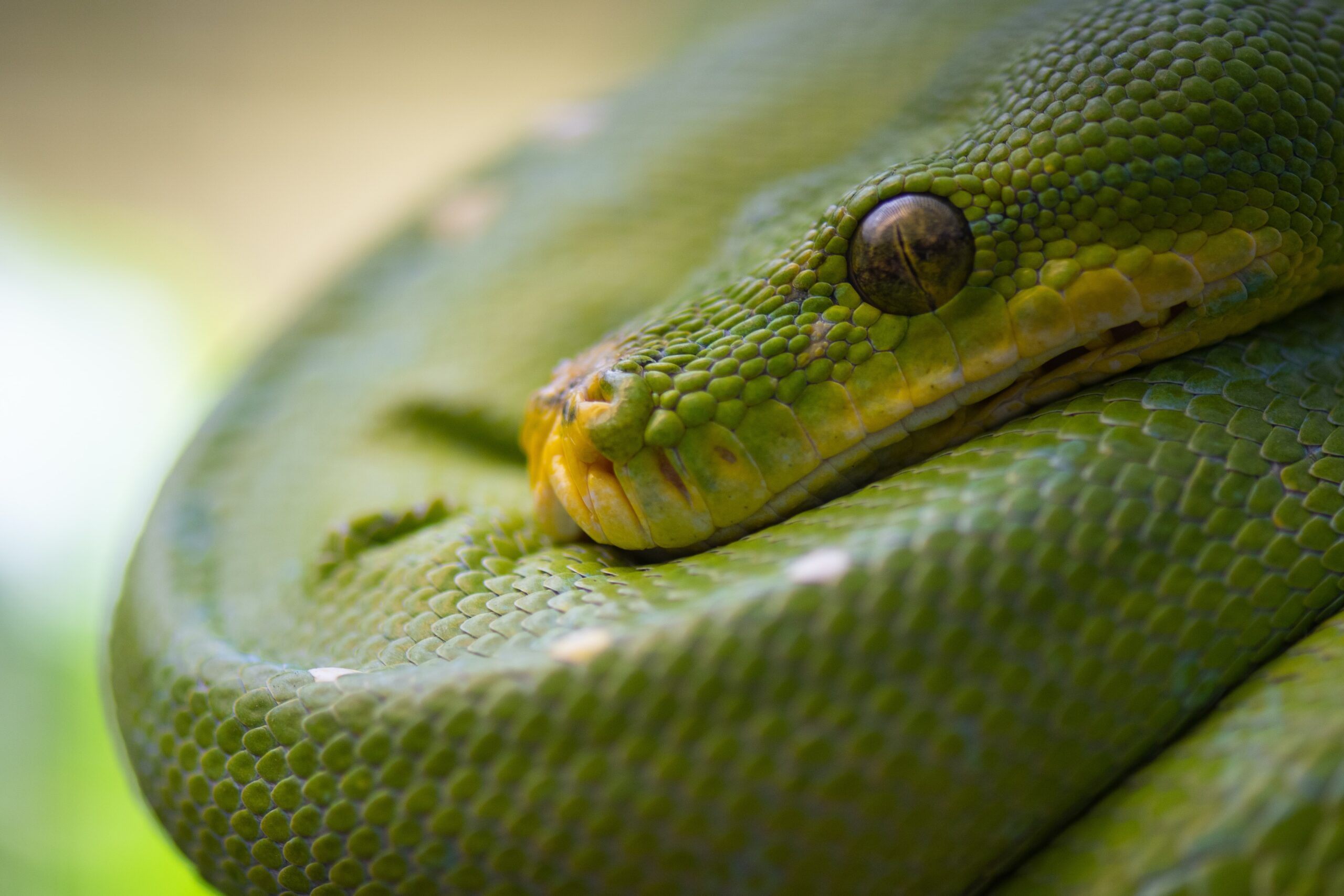 In this article, we will answer the following question: Will chickens eat snakes? We will talk about the role of the prey-predator, the food chain, and what animals pose a danger to snakes.

Chickens can kill and eat snakes but they won’t normally do it. Chickens evolved by hunting crawling critters for food, and they are equipped with a powerful beak, inherited from some much larger ancestor, which we generically call “dinosaurs.”

If you have snakes around the chicken coop, this is a sign that you have rodents entering the coop and probably eating your chicken feed. Weasels are a  type of rodent, but rather than eating chicken food as mice do, weasels can also attack and kill chickens.

Snakes should not hang around your chicken coop, so to keep  them away follow these simple tips:

Substitute any one-inch chicken screen with hardware fabric. We screen our windows and doors using a 1/4-inch hardware cloth (wire, heavy-duty mesh is much stronger than chicken wire mesh) to keep out raccoons, weasels, and snakes to enter.

Check the gaps between the doors and install additional weatherstripping or door moldings so that there are no openings larger than a half-inch (and a quarter inch if you can).

Does your coop have a solid floor? If not, install a hardware cloth apron (sturdy wire mesh) to prevent snakes and other predators from burrowing into your coop and running away.

Rodent tightness: make the chicken coop less attractive to mice and rats. Less vermin means fewer potential meals for snakes, and therefore a less attractive hunting ground for snakes. Store chicken feed in rodent-proof containers and consider a foot-operated dispenser that chickens have to step on to access the feed.

Keep the areas around the coop clear and free of hiding places for snakes. Keep grass and bushes well-trimmed. Remove dead leaves and stacks of brushes and keep the outside area and outside track clear.

Snakes like to hide in the shelter (and so do mice). Don’t leave a convenient place near your chicken coop for mice and snakes! The fewer places to hide, the less attractive a chicken coop will be for vermin and snakes.

The collection of odors that snakes, lizards, and turtles dislike

Snakes, lizards, and turtles have become companion animals for breeders of exotic species in a few years, who value them for the originality of their behavior and because, unlike other conventional pets, they do not emit noise, they are very independent and hardly you have to take care of them.

These are wild animals that in many areas of the world are even perceived as vermin. About them, there is a whole literature and complete popular lore that offers ways to get rid of their presence.

We are not going to talk here about chemical solutions to eradicate them, of course not, we are going to refer to those natural or naturalized remedies, all homemade, that are used to avoid their presence. The fragrant ones, the aromatic ones.

Our goal is none other than commenting on them to offer information about what bothers these wild animals. Without them, and unlike those who do not love them, we can be more sure that the place we have chosen for our exotic pets will be a pleasant space. How about we start by talking about what snakes don’t like to smell?

Snakes are not at all amused by the smells given off by some plant and tree leaves, especially those that humans already know for their penetrating aromas.

These are the cases of rue or comfrey. There are those who even burn some of these leaves to, with their ashes, create some space that is impenetrable against them. A plant that must be joined to the previous group is wormwood, which in small snakes has been shown to be quite effective in driving them away.

A product that snakes abhor is sulfur, however, it is presented, in grain or in flakes. Naphthalene, the same. Some do the doublet with both products, mixing them together or making the mothballs soak in sulfur to keep their scent combination unchanged for days.

Some specialists even talk about using mothballs when snakes get into confined spaces and it is not easy to get them out of them. Another intense scent that puts snakes to dust is that of ammonia. In this there is no secret, it is a smell so strong that no domestic animal will want to share space with the olfactory aggression that it supposes.

What kind of snakes eat eggs?

The eggs are swallowed whole, then pounded and the shells regurgitated. African egg-eating snakes are found in several species, but they are all very similar. Its color varies from yellow-tan to brown, to black. Most species do not exceed 3 feet in length.

Unlike any other snake in the world, bird eggs provide egg-eating snakes with all their nutritional needs. If you can find them for sale, they are an ideal option for those who wish to have a snake without having to feed it dead animals.

The only problem may come from the source of the food. The chicken eggs are too large, so you will have to find a source of quail eggs or smaller ones.

The egg-eating snake is a paradox. We will never know why nature made it an egg eater. As thick as a human finger, this snake is capable of swallowing chicken eggs. It is mainly nocturnal and spends its time hidden among the foliage. Master of the art of climbing trees, it feeds on the eggs it finds in the nests of birds.

It is not poisonous, but it is aggressive. Very irritable, bites for less than nothing. When angry, it inflates the front of the body and gives a succession of loud whistles. It curls up and attacks its adversary in the manner of cobras.

When the animal curls itself up, its skin scales make a curious, very perceptible noise when rubbing against each other. The egg-eating snake resembles several poisonous species, which is excellent mimicry for it; so much so that many predators are suspicious.

In the forests of equatorial and tropical Africa, where birds do not have a defined breeding season, the egg-eating snake finds enough to feed regularly throughout the year. The same does not happen to those that live in northern and southern Africa, where nesting stations are well marked.  There are snakes that have too fast sometimes for long periods since in the dry season it does not find any eggs.

Next we will see the main predators of snakes:

One of the main snake predators is birds such as eagles and kestrels. These birds have very keen vision and are able to attack their prey silently, but at the same time very violently. These animals can even ingest poisonous snakes, without being affected.

But there are other types of birds such as chickens, turkeys, herons, and storks that also eat smaller or weakened snakes. None of these animals feed exclusively on snakes, but they never miss the opportunity to eat a snake.

We will also find that some species of mammals are occasional snake eaters, for example, Wild boars Armadillos, Badgers, Raccoons, Skunks, Foxes, Coyotes, Mountain cats, Leopards, and many more. They can differentiate which snakes are poisonous and avoid attacking them; so they prefer to go for the less dangerous ones.

In the case of some species of mammals such as Asian pigs, they also attack poisonous snakes; that although they are not immune against their venom, their skin is so thick that it does not affect them too much. The mammal that represents the greatest danger to snakes is the Asian mongoose; This animal has immunity against the cobra’s venom, so they prefer its consumption quite frequently.

Animals immune to the venom of snakes

Other animals that use their resistance to some snakes’ venom to eat them are the musuraña, the hedgehog, and the North American opossum. In addition to these animals, there is the real snake that is capable of ingesting other snakes, even if they are of the same species.

Badgers are also predators of snakes One of the animals that stands out for their ability to eat snakes is the honey badger. This mammal species lives in Africa and the Middle East and has an impressive ability to catch and eat snakes. This badger grabs the snake by the head and kills it with its powerful jaw. It can eat a one and a half meter snake in just 15 minutes.

It is not that uncommon for a chicken to kill and eat snakes, but only if it is a small one. You have to look out for larger snakes, especially the black snake, which is especially dangerous and can easily kill your birds.

Although eating snakes may seem exotic to us, it is not as strange as it seems. Many species of the animal kingdom consume them, although no animal is exclusively feeding on snakes. Even people consumed some species of snakes, especially in the past when food was scarce. In some parts of the world (eg. Vietnam) it is still considered a delicacy.

FAQ on Will snakes kill chickens?

Most snakes do not eat chickens but look for their eggs. However, if they are hungry and there is no alternative, snakes can eat chickens or bite them.

How do I protect my chickens from snakes?

To protect your chickens from snakes you have to keep the outdoor area clean and free of possible hiding places. Check the gaps between the doors and install additional weatherstripping or door moldings so that there are no openings larger than a half-inch (and a quarter inch if you can).

Black snakes can kill chickens, but they mostly eat their eggs or baby chicks. To keep the black snake far from the kitchen coop keep grass and bushes well-trimmed, remove dead leaves and stacks of brushes and keep the outside area and outside track clear.

Are snakes afraid of chickens?

Big snakes are not afraid of chickens, but if a small snake ends up in the kitchen coop and finds an angry chook, he better hide!

What smell do snakes hate?

Snakes hate the smell of cloves, cinnamon, garlic, lime, and onions. Make a spray by chopping the garlic cloves and adding them to the oil. (Any oil will work.) Infuse the garlic in the oil for a few weeks then strain.

What is the best animal to keep snakes away?

The best animal to keep snakes away are foxes, raccoons, and pigs. Also, guinea hens, turkeys, and cats are good at keeping snakes away.