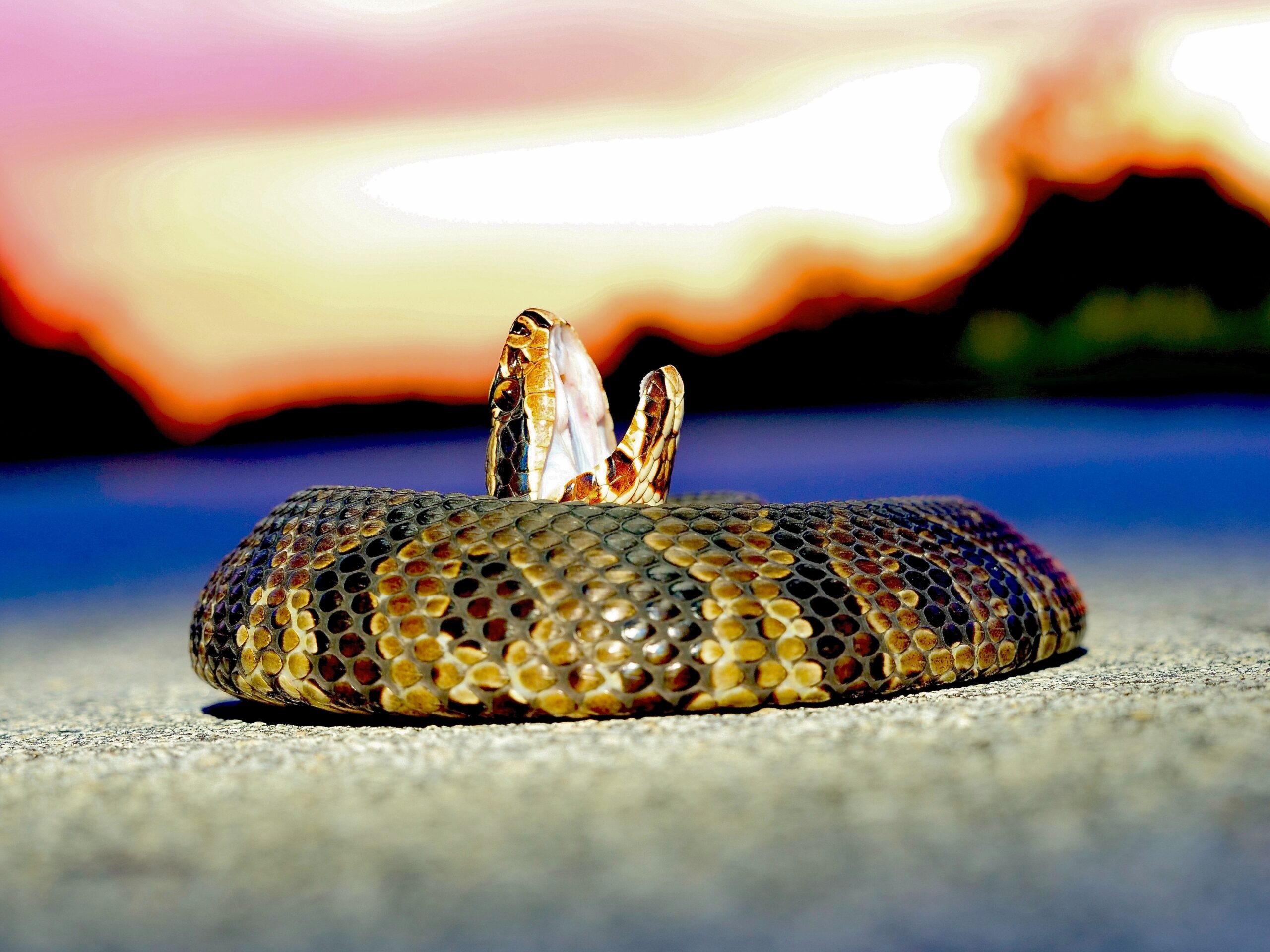 In this blog post, we will answer the following question: Will a snake die if it eats a poisoned rat? We will also talk about the most common internal and external diseases in snakes, that may be caused or made worse by the type of food it is consuming.

Will a snake die if it eats a poisoned rat?

A snake can get sick or die if it eats a poisoned rat, but there is no guarantee. It will depend on the size of the prey and the amount of poison that the rat ingested. Usually, it takes two to three days for the rat poison to take effect, but our advice is, if we are speaking about your pet snake, consult a veterinarian for guidance and first aid.

If a snake eats an infected rat, it will not necessarily die, but it can get sick. Here are the most common conditions caused by eating bad prey:

Trichomoniasis: it is an infectious process caused by a protozoan called Trichomonas. The most frequent form of contagion occurs through the consumption of mice infected by a said endoparasite. Its main symptoms are diarrhea, vomiting, and loss of appetite. Infected snakes often suffer from a weakened immune system, and can develop secondary bacterial infections.

Amebiasis: it is among the most frequent diseases in captive-bred snakes. It is a highly contagious infectious pathology that is caused by some species of amoebae (unicellular microorganisms with parasitic habits). The main form of contagion is the ingestion of contaminated food or water. Upon entering the snake’s body, amoebas are concentrated in the liver and intestinal mucosa.

Therefore, the symptoms are similar to those of a gastrointestinal infection, such as vomiting, diarrhea, foul-smelling stools that may be accompanied by blood or mucus, listlessness, and poor appetite. Many infected animals can develop secondary bacterial infections, due to the weakening of their immune systems.

The organism of snakes can also be affected internally by various endoparasites, such as worms and protozoa, for example. Tapeworms and nematodes (roundworms) are endoparasites found with some frequency in captive-bred snakes.

Both are parasites of the digestive system that can generate complications when they are not treated properly and manage to reach the bloodstream, expanding through the body’s tissues and affecting other organs (the lungs, more frequently).

Having said all this, it is crucial to highlight the importance of respecting periodic deworming in snakes and offering them adequate preventive medicine. In addition, visits every 6 months to an expert veterinarian in exotic animals will be important to monitor their health and prevent such pathologies.

How to choose the best quality food for your snake

When buying frozen mice or rats we must look above all for quality rather than price. If they are not properly packaged, they can suffer an alteration known as cold burn, especially in the case of “pinkies” (newborn mice or a few days old).

This alteration consists of the appearance of a dark stain that corresponds to an area in which the tissues have lost water and have become dry. If the mice have been frozen for a long time they can become rancid, which is quite unhealthy for the animal that ingests them. Abnormal colors may also appear in the abdominal area.

There are two methods of thawing mice. The first and simplest is to leave them at room temperature until they are completely thawed. They can also be thawed more quickly by putting them in a bag and then the bag in hot water. Some people put the mouse directly in hot water, but with the bag method, we don’t avoid drying it afterward.

We should NEVER heat a frozen mouse in a microwave. The safest thing is that the animal explodes and puts everything lost. Besides, some internal points of the mouse can become overheated, in such a way that when we touch the mouse it may seem that its temperature is normal, and the snake when eating it burns the esophagus.

Next, we will talk about external parasites and associated problems, that can also be caused or made worse by the type of food you are feeding your snake with.

Snakes can also be affected by external parasites, mainely ticks, and mites. Usually, the snakes that come into contact with these ectoparasites share their environment with other animals, such as dogs, cats, cows, sheep, etc. Or when they do not have a properly sanitized and conditioned habitat to provide optimal conditions for their development.

Generally, ticks are easier to recognize and fight than mites. Therefore, it is easier to eliminate them quickly so as not to generate no side effects in the snake’s body. However, mites are difficult to identify, they reproduce very quickly and often bring health complications for snakes.

When the mites lodge in the skin of the snake and begin to suck its blood to feed, they “divert” the essential nutrients that the animal needs to be healthy and strong. So they can lead to nutritional deficits, anemia, and a weakening of the immune system.

An animal with low immune defenses becomes more vulnerable to numerous diseases. In more advanced mite infestations, the snake may have its respiratory system and vision compromised. In addition, cases of dermal allergies associated with the presence of mites are relatively frequent.

The eyes of snakes can be affected after an accident or by improper handling by the breeder. However, eye infections can also derive from poor drainage that causes the accumulation of lubricating fluid and consequent increase in intraocular pressure (something similar to what happens in glaucoma).

In addition, poor habitat hygiene tends to promote the accumulation of dirt, which can enter the snake’s eye, causing injuries and irritations that can lead to an eye infection. Therefore, maintaining optimal grooming and conditioning of the animal’s environment is essential to care to prevent numerous diseases.

Treatment for eye problems will depend on the previous diagnosis made by the veterinarian. Depending on the health status and symptoms of each patient, topical antibiotics (with eye drops, usually) or injections may be administered to eliminate the bacteria from the animal’s body.

Common Diseases in Snakes: The Blister

Although less well known than the other diseases in snakes, Blister is diagnosed with some regularity in reptiles raised in captivity. It is an infectious pathology, whose main initial symptom is the redness of the lower part of the animal’s body (mainly in the scales).

The Blister can have multiple causes, but it is usually related to humidity problems or poor grooming in the snake’s environment. That is to say: most of the reptiles diagnosed with Blister have been raised in excessively humid and/or dirty environments.

When not treated quickly, the reddened scales become inflamed and swollen. At this stage, there is a high risk of developing secondary infections caused by fungi or bacteria. Therefore, if you have a pet snake and you notice that its skin is irritated or altered, we recommend quickly consulting a veterinarian who is an expert in exotic animals.

Treatment for Blister in snakes will depend on the health status and specific symptoms of each animal. However, they usually involve the use of topical antibiotics to fight infection on the scales. In more advanced cases, it may be necessary to administer antibiotics through injections.

Of course, both prevention and treatment for this pathology require reinforcing hygiene habits and better conditioning the snakes’ habitat.

Although snakes love heat, their skin of incomparable beauty is very sensitive to solar radiation. For this reason, excessive exposure to artificial or natural light can cause burns and dermal inflammations, which can also lead to the development of secondary infections.

As we explained earlier, a mite infestation on the snake’s body can lead to respiratory illnesses. However, there are also other possible causes, such as humidity problems in the environment, stress, and improper handling by the caregiver that can damage the snake’s respiratory system. On some occasions, respiratory tract infections in snakes can appear as a symptom of septicemia.

In general, the symptoms derive from the difficulty of breathing itself caused by the pathology or derived from it. For example, the snake may begin to breathe with its mouth open or emit a kind of hiss during inspiration and expiration.

Respiratory pathologies in snakes are usually quite aggressive and cause the rapid decline of their health condition. For this reason, veterinary attention must be immediate in order to establish an effective and adequate treatment for the symptoms of each animal.

Snake shedding problems are not a disease in themselves, but they can appear as a symptom of somebody disorders. Likewise, the incomplete molt, known as “dysecdysis” must be treated quickly so as not to cause infections or secondary skin problems.

While there are several possible causes for shedding problems, they are often associated with nutritional deficits that appear when the snake’s feeding is unbalanced or inappropriate. Therefore, before adopting a snake as a pet, it is essential to know its nutritional needs and to have the guidance of a veterinarian specialized in exotic animals.

However, incomplete shedding can also appear as a symptom of an underlying infectious process. And even be related to the presence of ectoparasites in the body of the snake. Therefore, when observing that your snake has a problem during its skin shedding, remember to quickly take it to the veterinary clinic specialized in exotic animals.

In conclusion, we remind you that snakes can die if they eat a poisoned rat, so you should always be careful with where you outsource the food for your pet snake.

If you are asking whether a snake will die if it eats a poisoned rat because this is your plan to get rid of a specific garden snake, don’t! There are more natural ways of repelling snakes, without harming any other living. For some ideas, click here.