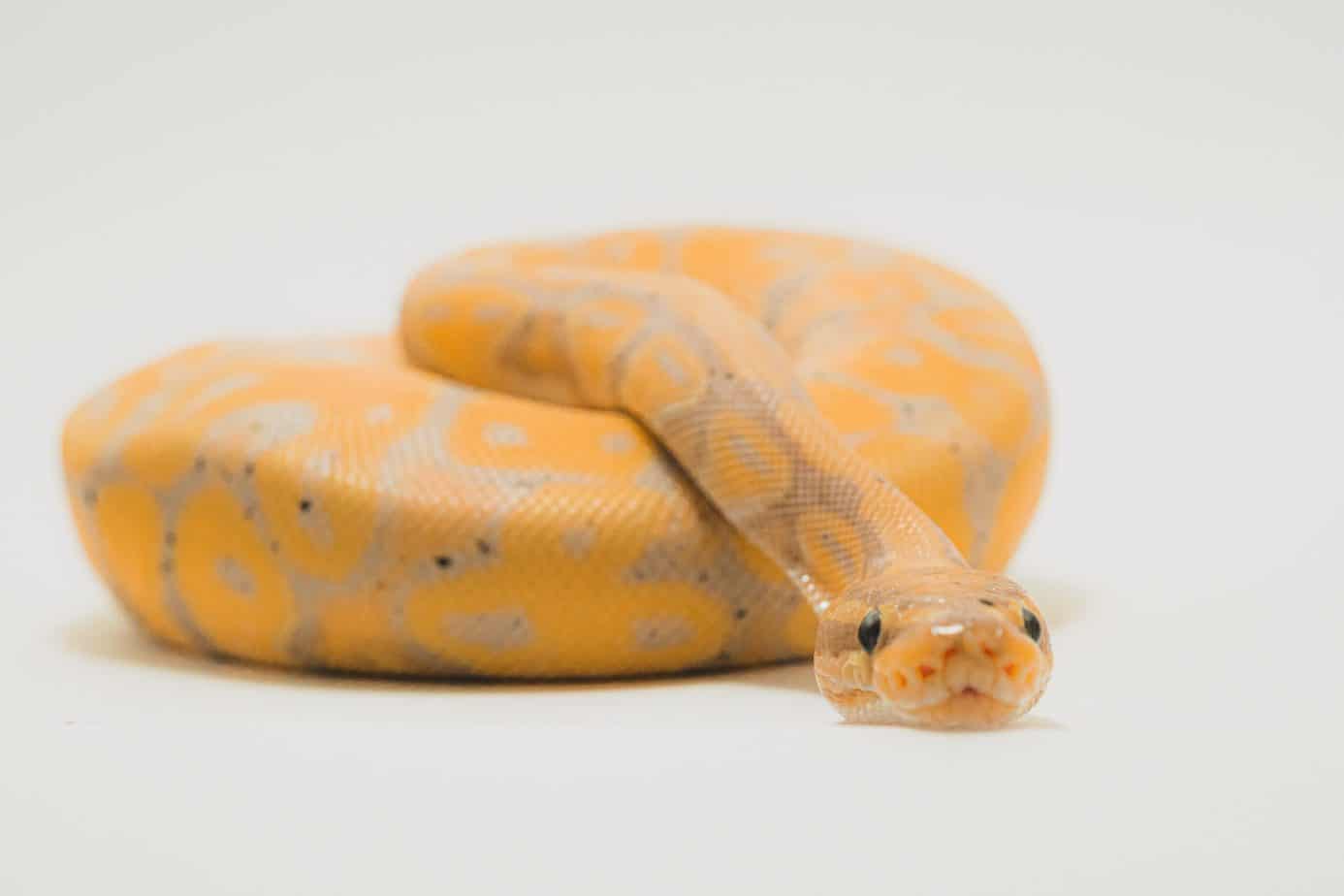 What snake has the sharpest teeth?

After briefly answering the question “What snake has the sharpest teeth?” we will move to the description of this snake.

Description of the body

They have an average length of 125-155 cm. The female and male can be distinguished based on their tail length,12 % for male and 6% for female. Females are generally stout and heavy.

It has striking colors much like dead leaves on the ground. In this way, it has a strong capability of hiding itself from predators or prey when it wants to attack. The camouflage is exceptional in this case as you wouldn’t realize that he was there in the dead leaves. Individuals can be recognized when there are no dead leaves around.

The pattern on the body of the gaboon viper is also striking. It has a white or cream color head with a white central line. The color of the belly is pale with irregular black, brown blotches.

The fangs are long, hollow, sharp, and grooved teeth that are present only in poisonous snakes. These fangs are connected to a sac behind the eyes of the snake in the head. The sac contains a poisonous material or liquid known as venom. The venomous snakes have the sharpest teeth because they have to catch their prey.

When a venomous snake strikes its prey they release venom into the body of its prey. The venom either kills the prey or paralyzes the prey. Some snakes fold back their fangs because they are very long and the snake can bite himself. When the fangs are broken or lost new fangs grow.

The poison of some snakes works immediately and the snake holds onto the unlucky animal with its mouth until the animal dies. Other snakes just bite the animal and let the animal die. These snakes do not hold the animal because they might get hurt when the animal struggles for life.

After that, the snake smells the dead animal with its flicking tongue and then swallows it.

Sea snakes are considered more venomous. They may feed on the fishes that are on the surface of the water. Other poisonous snakes are Rattlesnake, Copperheads, and Cobra. Spitting cobra can spit the venom up to 6 feet.

In many countries, the venomous snakes are caught and their venom is squeezed from the sac through their fangs. This venom is used to make antivenom which is a medicine to treat the patients that are bitten by the snake having the sharpest teeth.

Types of fangs in snakes

It is to be considered that there are two types of fangs. One is located at the front of the jaw which is called hollow fangs containing the venom. The other fangs also known as grooved teeth are present at the rear part of the jaw.

The hollow fangs are present in all the terrestrial and the sea snakes. The grooved teeth or simple fangs are present only in Brown Tree Snake Boiga irregularis and a group of freshwater snakes in northern Australia.

Snake with the longest fangs

Gaboon viper has the longest fangs among all the snakes. This snake has the sharpest teeth of all the snakes. Although they are docile and do not often bite they have the ability to inject a large amount of venom into their prey. A person in Switzerland was bitten by this snake on the chest and the person died one and a half-hour later after the bite.

The two famous herpetologists (reptile and amphibian biologists) died because of the bite of venomous snakes.

A single gaboon viper has enough venom to kill 30 individuals. They are unpredictable and can quickly move in short bursts when threatened.

Gaboon viper is found in rainforests and woodlands. It is found in a place which is close to its other relatives much like an open country. They are found at low altitudes but in rare cases, it can be found at high altitudes at approximately 1500 m. The maximum altitude is recorded at 2100 m for the gaboon viper. In Tanzania, they are found in agricultural lands or crops.

They are mostly nocturnal. Furthermore, they hunt at night. They are slow movers and wait for suitable prey to pass by. They hunt by ambush. Although they are considered active hunters, they hunt during the first 6 hours of the night.

They are very calm and tolerant snakes and do not often bite like that of most vipers. But the bite can occur due to bad temper by the snake’s sharpest teeth. In Ghana, they were killed in the grasslands, meaning that they were hunting rats there.

Although they are calm and tolerant snakes, they can bite when threatened. When several provoked they made a loud hiss to warn the person or the animal. They flatten their head with every expiration. They are one of the fastest striking snakes in the world so care should be taken while handling such types of snakes.

They have excellent eye movement. Furthermore, they can fix their eye position even if their head is moving up and down. They can look backward and forward at the same time with one looking backward and the other eye looking forward. When they are at sleep no eye movement occurs and the pupil is strongly contracted.

Due to their excellent eye movement and fast striking abilities they are excellent hunters. They strike their prey with high precision. The snake’s sharpest teeth hold on to the prey. They do not let go of their prey but hold on to them with their canine teeth until the prey is dead. They have incredible teeth. This is not very common behavior among the family of vipers.

They feed on rabbits, birds, field mice, rats, frogs, toads, and other mammals. The very unlikely prey is a tree monkey or chimpanzee.

When during peak sexual activity two males engage in combat with one male striking the other one down. It starts when one male rubs its chin along the back of the other male and the other male raises its head. The first one does the same and their necks intertwine. After this, they turn against each other. They overlap as they change their position. The fight continues until one of them is knocked out.

In captivity, the fight may occur four or five times a day until the courtship or mating doesn’t occur.

After reading this article on “What snake has the sharpest teeth?” the reader will be able to recognize the venomous and the non-venomous snakes. He will know about the characteristics, feeding, and the behaviour of gaboon viper along with some interesting facts about snakes.

Feel free to ask anything about “What snake has the sharpest teeth?” in the comment section below.

FAQ; What snake has the sharpest teeth?

Frequently asked questions of “What snake has the sharpest teeth?” are:

What snake bite kills the fastest?

The Black Mamba snake kills its prey very fast. Its venom is 12 times more lethal for humans than any other snake. This snake can bite 12 times in a single strike. But the humans are unusually big as prey therefore it takes at least 20 min for a human to be dead.

Are there any snakes without teeth?

There are 35 species and subspecies of the Garter snake that are toothless. Despite being fangless, these creatures are amazing.

What snake has killed the most humans?

Saw-scaled viper (Echis carinatus) killed the most humans in the world. It is the deadliest snake in the case of humans.

In which country there is no snake?

Ireland has no native snakes. There are a couple of countries that don’t have snakes including Greenland, New Zealand, and Antarctica. The people that are afraid of snakes including Indiana Jones can visit these places without any fear.

Has a python ever eaten a human?

There are two reports of the python eating a human being especially the reticulated python. The python is among the 3 heaviest snakes in the world. They are non-venomous constrictors.

Yes, the bite of the ball-python hurts. The python bite can cause wounds, bruises and can puncture the skin. It hurts when the snake bites. The bites that cause internal damage hurts a lot.