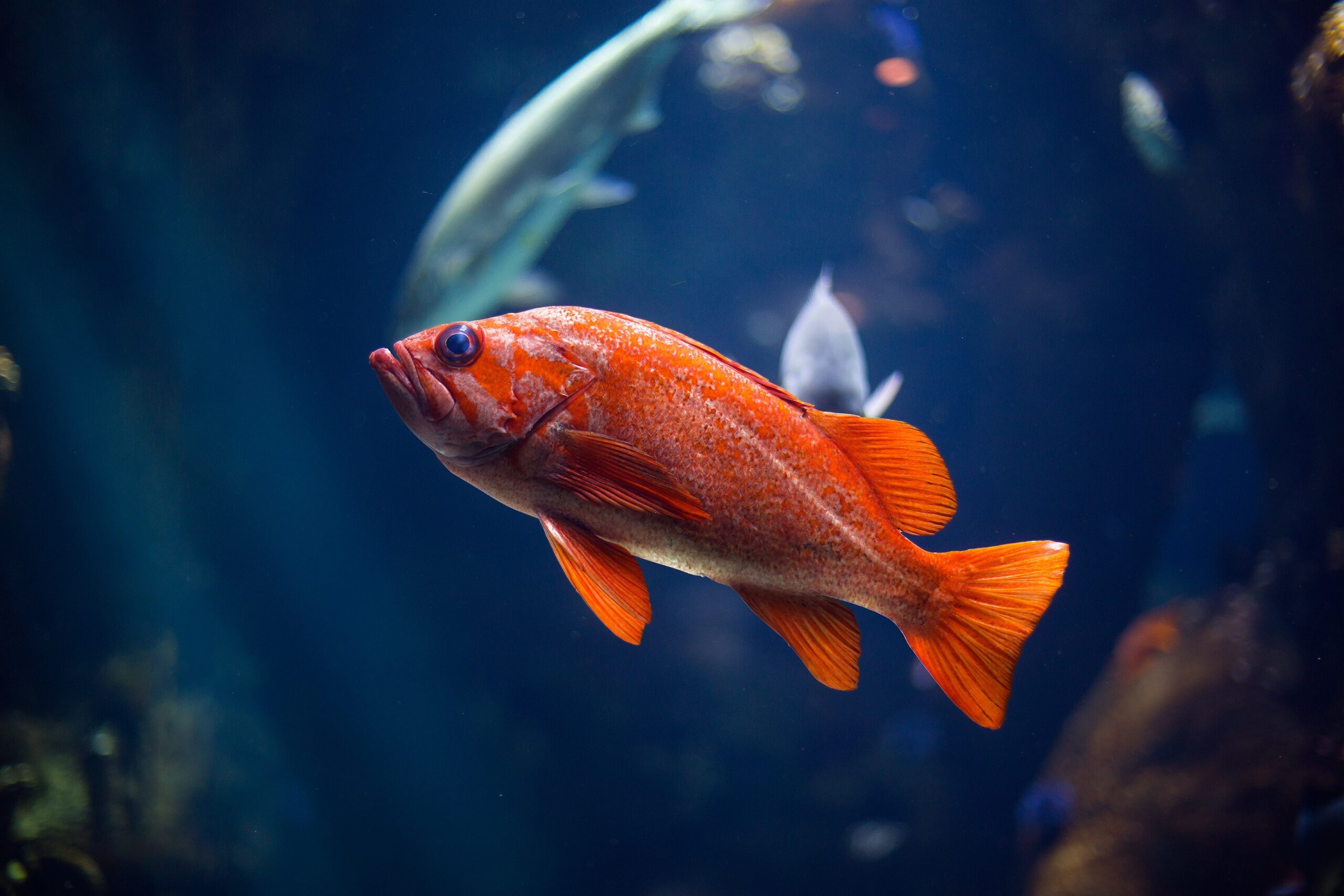 What fish has the sharpest teeth?

Piranha fish have the sharpest teeth among all the fishes. They range from Argentina to Colombia. Their 20 different species are found in the Amazon River. The most infamous species of piranhas is red-bellied piranha (Pygocentrus nattereri) teeth are the sharpest teeth among all the piranha’s species. When they attack another fish, they signal others too.

Piranha is also called carebi or piraya fish. They have over 60 species and are notorious for its voracity. They are found mainly in the rivers of South America. Furthermore, they are shown as very deadly sea creatures in the film Piranha(1978), they are carnivorous fishes. Most of the species of piranha fish are scavengers and other feed on plants. They are the most dangerous fishes.

The piranhas never grow more than 60 cm or 2 feet. Their colour varies from orange to completely black. They have deep bodies, generally blunt heads and triangular-shaped sharp teeth that cut in a scissors-like fashion.

The red-bellied piranha (Pygocentrus nattereri) swim in large groups of almost 100 and locate their prey. They often like prey that is slightly larger or smaller than themselves. When they locate the prey, they signal others to come and feed. Piranhas have excellent hearing abilities and they all rush to eat it and then go away.

Another species of piranha is lobed toothed piranha (P. denticulate), which is found in the lower Amazon River and the basin of the Orinoco River.

The Next specie of piranha fish is San Francisco piranha (P. piraya), which is found in the San Francisco river of Brazil. They are also dangerous for humans.

This fish has the sharpest teeth, and it helps them to quickly cut the skin and feed on the dead bodies of the animals and fishes.

Piranha fish has two fangs projecting from the lower jaw into the upper jaw. From the upper jaw, they project into the skull. The skull has two negative spaces in which these fangs fit enough. For this reason, these fishes are called “Vampire fish” or “Dracula fish” because of the two fangs that give a Dracula or vampire appearance to the mouth of the piranha fish.

They also have dozens of other small sharp teeth that have pointed sharp ends and the customer who consumes piranha fish must be a potential customer.

When you dive into the freshwater to see a piranha fish you wouldn’t realize when they attack you. They move very swiftly as the cobra and can attack you before you know. The fangs are extremely painful and surely cause a bloody discharge. That is why this fish has the sharpest teeth.

Types of teeth in fishes

The second type of teeth are molars which are found in low dwelling fishes like chimaeras and skates. These teeth are broad and flat and used to crush and grind the molluscs.

The third type of teeth is incisors which are also used for cutting. Incisors have a variety of shapes starting from the same shape of human incisors to saw-edged or fused in case of parrotfish.

Where are teeth found?

They are found in various locations in the mouth of the fish:

The fish that has the sharpest teeth can be located in any of the above locations.

The teeth are thought to be developed from the scales covering the lips. It is because it is seen that the scales gradually develop in the teeth of the fish. In this way, some fishes develop the sharpest teeth among all fishes.

The first type of special teeth is villiform teeth. It is present in the deep-sea fishes like the dragonfish. It is used for stabbing and direction. These are very long and fine teeth.

The second type of teeth is present in the moray eel. The moray eel has modified pharyngeal teeth which project out often to grab the prey and push it into the throat of the eel.

Another interesting type of teeth is present in cookiecutter sharks. The way these sea creatures feed in combination with the teeth is really very fascinating.

What fish has the largest teeth compared to head size?

The answer to this question is very simple which is Sloane’s viperfish. Yes, this fish has the largest teeth as compared to the size of its head. The next question that hits your mind is how large are the teeth of viperfish?

They are so large that when the fish closes its mouth the teeth overlap its jaws. The fish has to open its mouth so that its jaws become vertical before swallowing its prey. The largest teeth are about half the size of the head.

The head size of the viperfish is between 1 and 8 inches. The head tapers to a small, forked tail.

Besides the exceptional teeth of this fish it also has exceptional colours. They have a shining silver-blue colour with photophores along the body of the fish.

These photophores have many benefits. It emits light which helps the fish to hunt down other fishes. Similarly, the light also attracts the smaller fishes on which this fish can feed.

In the daytime, the viperfish remains in the deep water from 2000 ft to 8000 ft. At night, it comes to the surface in less than 2000 ft because the food can easily be found in marine land.

The question arises: what viperfish eats? The answer is very simple: they eat small fishes and crustaceans. They also keep an eye on the predators. The Atlantic bluefin tuna likes to have a viperfish dinner at night in the ocean.

You need not be worried about this fish because they live in the deep ocean of tropical and subtropical oceans. You will not encounter this fish in the daytime on your beaches.

Viperfish has the largest teeth compared to his head size, but this fish doesn’t have the sharpest teeth.

A zoologist Alistair Evans’ and a palaeontology David Jones with an international team measures the microscopic teeth of the prehistoric fish known as conodonts. These fishes died out long ago. But this discovery can give us the idea of what these fishes eat 500 million years ago.

This fish has no jaws and after studying the teeth we came to know about the diet of this fish.

Tigerfish is among the scariest fishes on earth. It is widely distributed in Africa and has razor-sharp teeth. They attack large animals and attack on human beings are rare. They often hunt in packs.

One of the fish is pufferfish. Its teeth have the same genetic code as human teeth. It has other features too like the independent movement of its eyes.

Feel free to ask anything about “What fish has the sharpest teeth?” in the comment section below.

FAQ; What fish has the sharpest teeth?

Frequently asked questions of “what fish has the sharpest teeth?” are:

Can an angler fish kill a human?

No, angular fish live in the deep ocean where a human cannot breathe without pressurized submersible and the angular fish cannot raise to the surface otherwise he will die. He can only come to the bottom when maintained in a pressurized environment.

What fish has spikes on its back?

Can anglerfish be 7 ft long?

No, angular fish cannot grow up to 7 ft. It can only grow to 3.3 ft, which is very rare. They are usually less than 1 ft long. The angular fish is known for its characteristic fishing pole-like protrusion that dangles over the female head.

What is the most dangerous fish to eat?

Your betta fish has a stronger bite than the great white shark, but it doesn’t hurt. Most of the people say that it feels like a weird pinch, or it tickles. They do have teeth but the bite of the betta fish doesn’t hurt you.

What is the smartest freshwater fish?

Oscar is thought to be the most intelligent fish in the aquarium. Its few species are trained to do tricks. They are not community fishes and like to be with the same species in the tank. They can grow very quickly and can grow large.