What are the characteristics of white betta fish?

White betta fish are famous for their shiny white appearance and look attractive like other colorful bettas. They are often confused with albino bettas but both are totally different and equally beautiful.

White bettas are rare because they are white and hobbyists mostly opt for colorful bettas over white bettas. Due to this, they are not readily available in aquatic pet stores.

If you are interested in buying this particular betta breed color you have to check with both online and offline stores, as it would be difficult to find them easily in offline aquatic shops.

Like their wild cousins, they also come from similar habitats and have similar preferences in the aquarium settings. To know more about this betta in detail keep reading the blog. 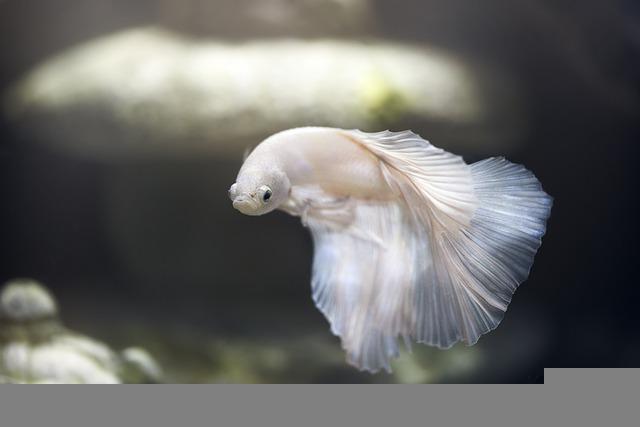 Tank size plays a vital role in fish health, behavior, and longevity. If you don’t provide the right tank size to your betta fish they will act aggressively due to lack of space and compact tanks will make them cranky too. If you house your bettas in less spacious and compact tanks, it will impact their growth and development.

It is very important to house your white betta fish in a right-sized tank for their growth and longevity. If you own a single betta fish then kindly keep them in a five gallons tank be it male or female betta.

If you are planning to keep two bettas then put them in a tank bigger than five gallons and in my opinion avoid keeping bettas together, they will end up fighting with each other.

Never keep bettas in community tanks, as they might end up hurting their tank mates or get bullied by them due to their long attractive pectoral fins.

If you are planning to keep your white betta in a community tank then add other tank mates before your betta fish and keep them in a bigger and spacious tank. Make sure not to overcrowd bettas tanks with too many tank mates, as it can cause various infections in them due to less space.

Betta fish are hardy species and have been known to survive in harsh conditions. But the fact is if you replicate the same water parameters in their artificial habitat they will feel safe and secure.

Bettas prefer warm water in their tank and the water current should be steady in their tanks, so make sure you are installing filters that don’t stress your white betta fish.

Filters are essential to bettas survival as they produce lots of biological waste in their tank and are also prone to ammonia spikes.

A good sponge filter will do the work or if you want to filter the tank, chemically and biologically opt for filters that perform both the work.

White bettas like their other cousins prefer the same water parameters:

Temperature plays a vital role in white betta fish metabolism, so make sure the temperature is neither too low nor too high. Lower temperatures make them lethargic and susceptible to various infections and higher temperatures age them faster.

Install heaters in their tanks and regularly monitor the temperature using a good thermometer to avoid temperature fluctuations and temperature shocks.

White betta fish are way more aggressive than other betta species, so it is important to either keep them in separate tanks or if you want to keep them in community tanks then keep them with compatible species, otherwise, it will be difficult to manage incompatible ones.

Keep male white betta fish in separate tanks. Never keep two white male bettas together; they will end up killing each other to death. Male betta should be kept with female white bettas only during breeding time.

Avoid tank mates that are:

White betta fish like other betta fish like to hide under covers because they do the same in their natural habitat to hide from their predators or during fights. They live in floating plants and plants that give them a sense of security and a place to rest too.

There are various floating plants available in the shops and specific betta plants like betta bulbs and other leaves which replicate their natural habitat.

You can add floating plants, betta bulbs, Indian almond leaves, and marimo balls to their tank for hiding and resting purposes. Indian almond leaves will also maintain the pH in bettas aquarium and keep the tank environment healthy, as they act as natural filters.

White betta fish are surface dwellers like their wild cousins and occupy the upper and middle levels in the tank. They don’t care about the substrate, so if you are adding substrate or not adding substrate in a bettas tank it doesn’t matter to them.

If you are keeping bottom dwellers as their tank mates then you can add substrates to the tank. You can add small smooth and rounded gravels in the tank, as it won’t hurt or damage bettas beautiful pectoral fins.

Make sure to clean the gravel daily to avoid ammonia spikes and other infections due to ammonia pollution in the tank.

White betta fish is carnivorous and prefers lots of proteins in their diet. They can be trained in aquarium settings to feed on a variety of food too. They are very intelligent and easily trainable.

Include lots of proteins in their diet in the form of live food, and frozen and freeze-dried food too. Make sure you are not feeding them live or frozen food every day, as it can upset their stomach and lead to various digestive discomforts.

Feed them a balanced and nutritious diet that includes protein, vitamins, minerals, and other food sources like plant-based food too to enhance their colors.

Feed adult white betta fish twice a day and avoid overfeeding as it can lead to constipation and swim bladder disease. Baby bettas should be fed thrice a day and should be given proper care and nutritious meals for their growth and development.

Clean the leftovers every day to avoid ammonia spikes and unstable water parameters.

If you are planning to breed your white betta fish, you have to plan everything. Breeding in aquarium conditions should be done properly. There are a few things one should keep in mind to breeding their white betta fish:

White betta fish are famous for their jet white and shinier appearance and are not easily available due to their milky white appearance.

Betta fish are famous for their colorful appearance, so this particular betta fish is not seen easily in pet stores. If you want a white betta fish, you have to check online and offline stores.

No, as per my knowledge colorful bettas are more in demand than plain bettas. If you want white bettas you have to check with both offline and online stores.

What is the other name of white betta fish?

Are albino betta and white betta fish the same?

No, albino and white betta fish are not the same.