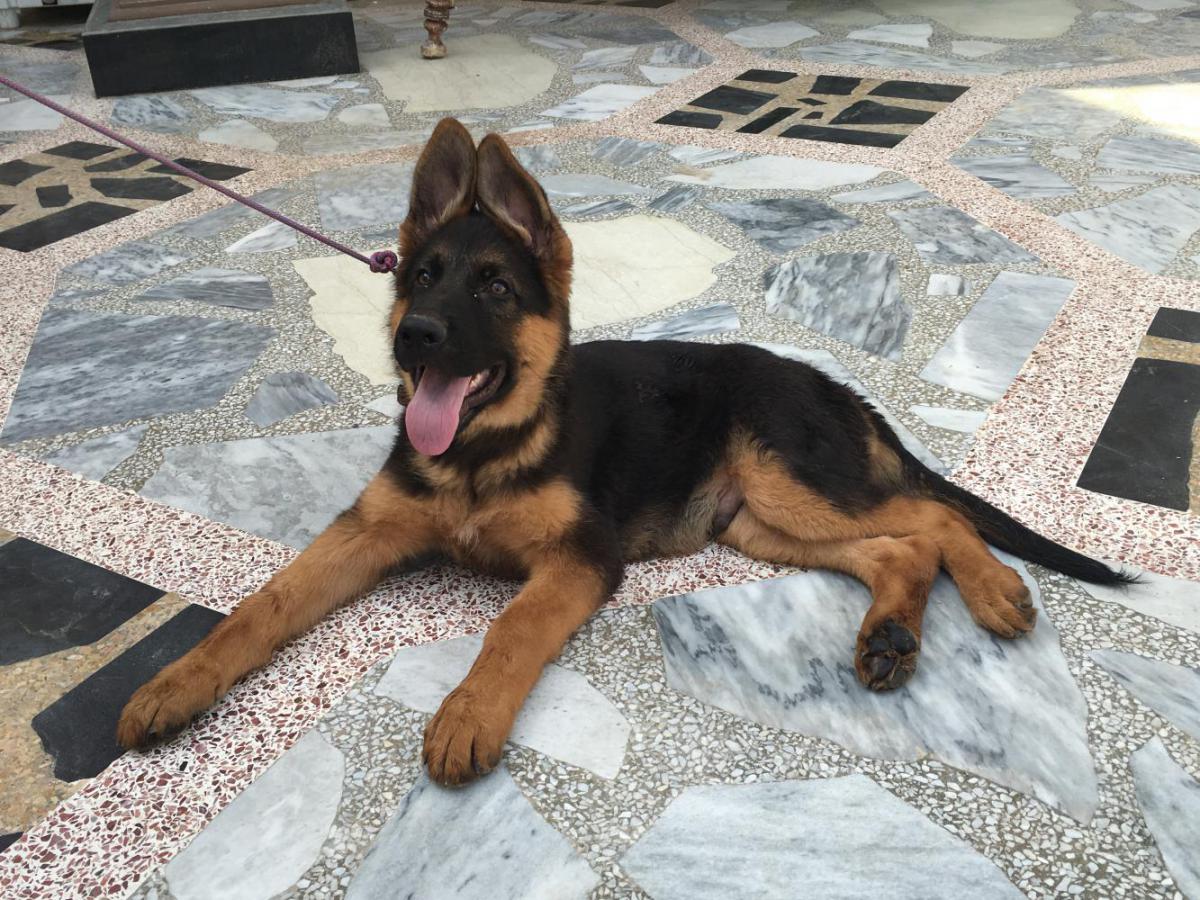 The German Shepherd dog is one of America’s most popular dog breeds, not because they are aggressive dogs or very loud when they meet strangers, but for better reasons. They are intelligent and capable working dogs. They are devoted and very courageous. Because of this, they are unmatched. They are also amazingly versatile dogs.

This breed also goes by the name Alsatian. Despite being purebred, some German Shepherds are found in shelters and breed specific rescues. You can even adopt them!

The German Shepherd dog excels at mostly anything they are trained to do: guide and assistance work for the handicapped, police and military service, herding, search and rescue, drug detection, competitive obedience and faithful companionship.

At three months, the German Shepherd is expected to have a height of 11 to 14 inches and a weight of 35 to 40 pounds. They tend to grow up in increments of 2 inches every month in a whole year. They can reach their maximum height at three years old which should be around 24 to 26 inches. Their weight at this age ranges from 79 to 88 pounds.

A German Shepherd at three months is still considered a puppy, of course. German Shepherds only stop being puppies at three years old. At this age, they should be fully mature already.

German Shepherds are easily one of the most popular dog breeds out there. They have a huge number of devoted fans and some people would even save their money just so they could purchase a German Shepherd.

When they become adults, they can be large and imposing, but despite this, they still have a cute puppy phase that most people will really fall in love with.

However, most dogs are not sold in pet stores until after 8 to 12 weeks since their birth. This magical time of their lives is an absolutely lovely sight!

How much food should a three-month old German Shepherd eat?

Feeding a German Shepherd puppy entirely depends on its current weight, activity level, metabolism. You should plan to feed your puppy three or four times every day. You can opt to decrease the amount of food you feed your dog as they get older as older puppies can be fed fewer times per day, noting and making sure that the calorie intake is not limited below the recommended amount.

Compared to the nutrition needs of adult dogs, puppies need two or three times the number of calories as adult dogs do. This may seem strange, and it is, considering puppies are much smaller than adults. However, German Shepherd puppies grow extraordinarily fast, so their caloric intake needs to support that.

To figure out how much to feed your German Shepherd puppy, look at his or her weight. Females will be slightly smaller and lighter than males.

Using the weight chart above, the general food chart in the previous section, and considering the gender and activity level of your puppy, you can calculate the approximate amount of food to feed daily.

Split that daily amount up between all meals. For example, if your 3-month-old GSD puppy is a male and weighs 30 pounds, you should feed him approximately 2 cups per day.

If he is eating 4 times per day, that would be ½ a cup of food at each of 4 meals. If he doesn’t seem to be gaining weight fast enough or seems to be ravenous at every meal, you can slowly increase the amount of each meal until he stabilizes.

How much exercise does a three-month old German Shepherd need?

Make sure you’re consistent with the amount of exercise your puppy gets. You need to help him build his stamina, and the only way he can do this is by exercising regularly but with caution. At the puppy stage, he’s much too young to be doing the rigorous activities that he will be more able to do as he grows older.

How long do German Shepherds carry their babies?

The normal gestation period in dogs is approximately 63 days from conception, although this can vary by several days.

When should German Shepherd puppies be weaned?

As a general guideline, most German Shepherd breeders wean their puppies gradually onto solid foods over a period of about 3 weeks, beginning when the German Shepherd puppies are around 3 1/2 – 4 weeks of age.

How many puppies do German Shepherds usually have?

Their usual litter size is around 8 puppies. The majority of German Shepherd puppies born, the first pup will be a male (typical male always impatient). Puppies start to be weaned around 3-4 weeks of age.

How will I know when my dog is ready to have her puppies?

Jenna Stregowski, RVT. “How to Help Your Dog Have Her Puppies.” The Spruce Pets, www.thesprucepets.com/whelping-canine-labor-and-delivery-1117846.