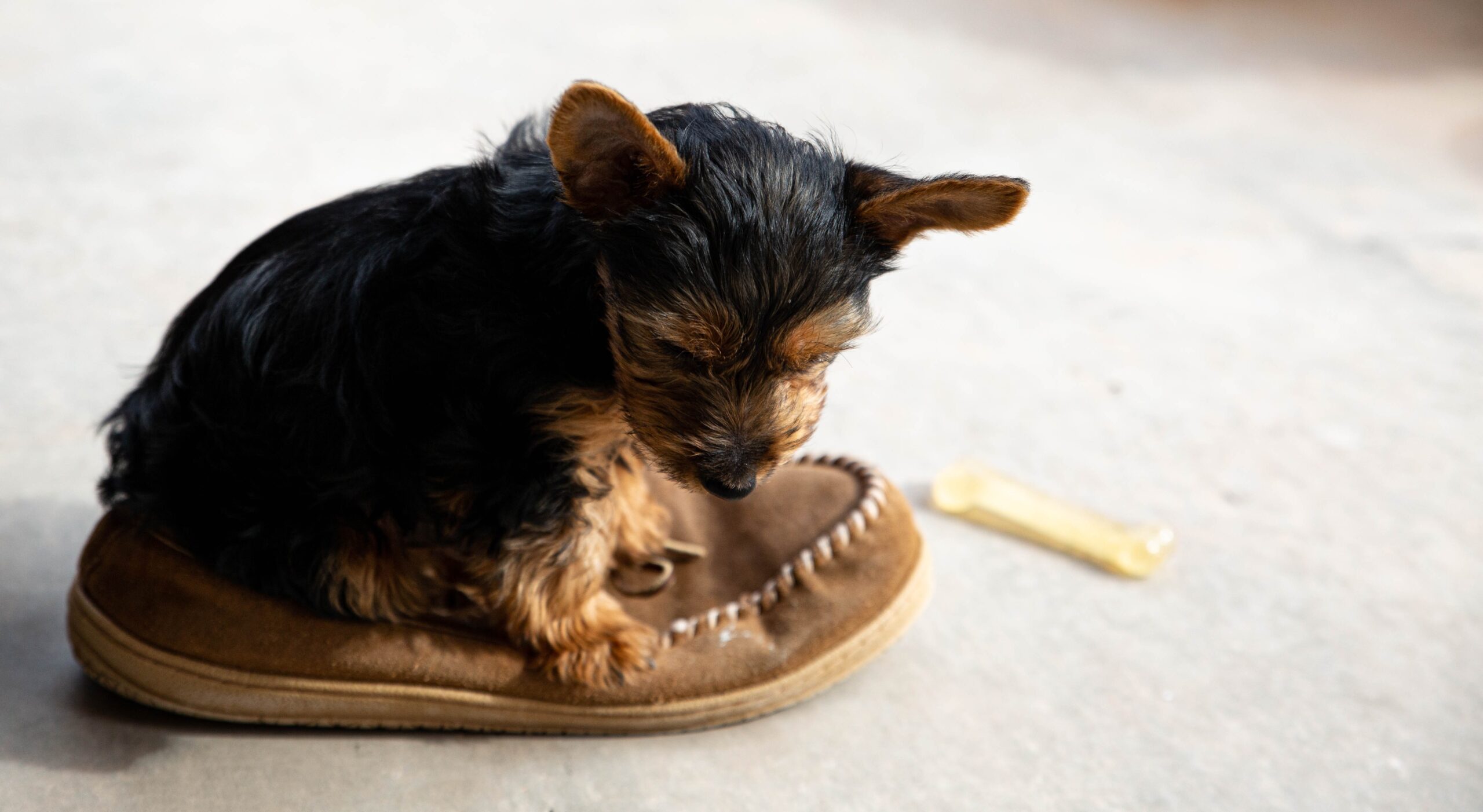 In this article, we will answer the following question: Should I let my dog eat grass? We will talk about the three main reasons why dogs love to eat grass; when you should be worried and how science explains about this canine behavior.

Should I let my dog eat grass?

In general, it is not dangerous for your dog to eat grass and it is completely normal behavior. The grass itself does not cause your dog any harm, however, you must be careful that it has not been treated with pesticides or chemical components since in this case, it could be a problem for your dog’s stomach.

As we have said, this behavior is normal and should not do you any harm. However, I would advise that your dog dedicate his time to other types of activities that are more beneficial for him, such as exercise or games.

Why does my dog ​​eat grass?

There are times when the behavior of a dog does not have a single response and there may be several reasons that justify said behavior. And this is one of those cases. These are some of the reasons for this behavior:

He likes the taste: although your dog finds the feed and food that we provide him at home more attractive, it is likely that the herb is to his liking and he eats it simply because he likes it.

If this were the reason and you want to prevent your dog from having this behavior, you can change the diet following the advice of your veterinarian. Perhaps if you have the food you like at home, you will not have to resort to eating out.

His stomach hurts: it is the most widespread version, especially when minutes after ingestion you vomit what you have ingested. It is believed that they ingest the herb to induce vomiting and thus clean the stomach.

The truth is that different studies have shown that this is not always the case. Less than 10% of dogs that eat grass are sick or in pain. If we add to this fact that only 20% of dogs vomit after eating grass, this theory becomes quite inconsistent.

It is entertaining: One possible explanation for this behavior is that your dog finds the activity of eating grass entertaining. It is natural for dogs to get close to the grass, they tend to have a lot of smells and marks from other dogs, so eating it can simply be a playful activity to pass the time.

Why do dogs eat grass and throw it up?

As we have explained before, dogs eat grass and then vomit it to cleanse their stomachs of harmful substances, either because something has made them feel bad and does not allow them to digest well or due to the ingestion of a foreign object that causes them discomfort. For these animals, eating grass is the natural way for them to self-produce vomiting and thus alleviate the pain or discomfort they feel.

It is something natural that we should not worry about if it happens from time to time and our dog is healthy. At the time they vomit, they do have to be observed to make sure that they expel the contents of their stomach without problems, that they do not choke on anything.

If you observe that your pet looks for grass and always vomits it, day after day, it is very likely that she has some digestive difficulty or that her daily feed is inadequate or of poor quality. In this case, consult your veterinarian, he is the specialist and who can diagnose what is happening to him and put a solution to the problem.

In addition, if an animal continually induces vomiting to expel a foreign object, it can further aggravate its stomach pain, since gastritis can occur.

Some experts indicate that eating grass continuously may be due to boredom or other behavior deeper in your character that may have gone unnoticed by the owner. It may also be that she does not assimilate correctly some food from her usual feed. Therefore, if you see that the practice of ingesting grass is something very common in your pet, it would be better to talk about it with your veterinarian.

Should I let my dog eat grass? The scientific perspective

The lack of scientific studies on such a common question as to why dogs eat grass is surprising. After searching a lot, I finally found an article that gave me some interesting information. This is this article published in Psychology Today magazine and signed by the canine psychologist and ethologist Standley Coren, whom I have been following for a long time.

The article cites one of only two scientific studies that have been done so far to find out why dogs eat grass. This is a study from 2008, published in the scientific journal Applied Animal Behavior and which I will comment on below.

The 2008 study, carried out by scientists at the University of California, aimed to test whether dogs ingest plants and herbs to purge themselves when they feel gastric distress or if they do so to supplement their diet because it is nutritionally deficient.

The initial study consisted of a survey of 25 veterinary students who owned a dog.

They all pointed out that their dogs ate grass. None reported having observed any signs of illness before their dog ingested grass and only 8% said their dog vomited frequently after eating grass.

With these results insight, the researchers decided to go ahead with the study and chose a sample of 47 canine owners. Of these, 79% said they had observed their dog eat plants (mostly grass). Only 4 of the interviewees admitted that they had observed signs of discomfort in their dog before it ate the grass and only 6 stated that their dogs had vomited after ingesting it.

After these two preliminary studies, the researchers decided to go ahead and expand the sample to 1,571 canine owners. Again, 68% said their dog ate grass frequently. Only 8% said they had observed signs of discomfort before ingesting the grass and only 22% indicated that their dog vomited after eating it.

Another aspect to highlight within the conclusions of the University of California study is that, apparently, younger dogs are the ones that most commonly eat grass. And also those who less frequently show symptoms of illness before eating it and those who vomit less after having ingested it.

Dogs eat grass as a heritage from wolves, and because they like it

The researchers conclude that the fact that dogs eat grass may be a behavior that reflects an innate predisposition inherited from wolves. It appears that, in wolves, the ingestion of grass can act as a purging method to eliminate intestinal parasites for two reasons:

Should I let my dog eat grass or stop him?

Reproducing the words of the veterinarian Adrián Aguilera, although eating grass does not have to be a serious problem in a healthy dog, it is advisable to take certain precautions.

In general, you don’t need to be alarmed when a dog eats grass and you don’t need to stop him. However, an animal that tries to induce vomiting to expel a foreign body may end up exacerbating the problem itself. Most of the time it is counterproductive since it only manages to cause gastritis. If a dog with a stomach ache ingests grass, it only complicates his problem.

At other times, the risk of a dog eating grass is that it may ingest a poisonous plant or that it has been sprayed with a toxic fertilizer.

Does your dog vomit continuously when eating grass? Does he eat some types of bushes and plants that he finds in nature? Does he like to eat grass as a hobby and does not vomit afterward? Tell us about your experience in the comments section below!

FAQ on  Should I let my dog eat grass?

Is it OK to let your dog eat grass?

Most experts agree that it is OK to let your dog eat grass, but to keep an eye on it. There are times when the behavior of a dog does not have a single response and there may be several reasons that justify said behavior. And this is one of those cases.

Should I let my dog eat grass to throw up?

You should let your dog eat grass, but if it consumes more grass in order to throw up, it is time to visit a vet.  If an animal continually induces vomiting to expel a foreign object, it can further aggravate its stomach pain, since gastritis can occur.

Why do dogs eat grass to be sick?

Dogs eat grass and then vomit it to cleanse their stomachs of harmful substances, either because something has made them feel bad and does not allow them to digest well or due to the ingestion of a foreign object that causes them discomfort.

In some cases, grass can make dogs feel better. Additionally, it is natural for dogs to get close to the grass, they tend to have a lot of smells and marks from other dogs, so eating it can simply be a playful activity to pass the time.

What can I give my dog to settle his stomach?

Here’s what you can give your dog to settle his stomach:
Chicken and Rice
Shredded cooked chicken
Bone broth
Or even baby food.

How do I know if my dog’s stomach hurts?

You will know that your dog’s stomach hurts if he presents the following symptoms:
Diarrhea.
Vomiting and retching.
Eating less or nothing at all.
Lethargy.
Painful abdomen.

Hi, I am Martin, I am a pet lover! I own a Golden retriever and a Long-eared Owl. They keep me company & I often had questions about them which I couldn't find answers for online. I put this hub together for people like me & you.