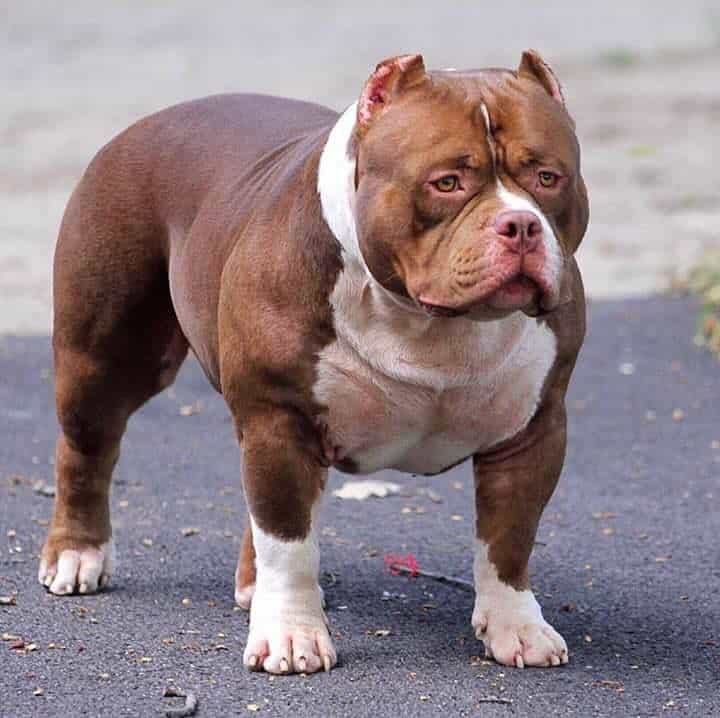 This blog post will talk about the Pitbull Bulldog Mix as a puppy. The appearance, needs, and grooming of this dog will also be addressed in this blog.

The Pitbull Bulldog Mix, also known as the Bullypit, is a mixed breed and is a result of crossing the American Bulldog and the American Pit Bull. Some people also just call this dog the Pitbull Bulldog Mix. This dog is insanely talented in dog guarding, has great agility, can serve as a watchdog, and is a very obedient dog. This dog can also be taken with the owner for jogging, tracking, and competitive dog endeavors.

The Bullypit is a medium to large sized dog and has a lifespan of between 10 to 13 years. It has a cheerful personality and is quite protective of its owners and family.

This dog is not a dog to fear as it does not tend to be aggressive to the point of losing control like most dogs. Dogs that are like this can blame their irresponsible breeders. This may also be because of poor ownership and the lack of socialization and training. If you have the time she needs, you will have yourself a dog who will be protective, cheerful, loyal, and loving.

Designer dogs have been in the dog industry for a while now but a lot of them say that the first breed of the Bully Pit or the American Bulldog Pitbull Mix came about in the last 30 years or even before that.

Dog Digest enumerates three reasons why the American Bulldog Pitbull Mix is the dog to have! These reasons are:

Consequently, the same website enumerates three reasons why the American Bulldog Pitbull Mix might not be good for your household. Nonetheless, the call is yours to make, but it is still important to take into account these considerations when planning to get a dog.

Where did the Bully Pit come from?

As previously mentioned, the American Bulldog Pitbull Mix is a designer dog, created probably in the last 30 years. Designer dogs cover the large number of mixed breeds being deliberately created nowadays. Most are a mix of two purebreds though not all. Most have a name that blends those parent’s names in some way. Sadly many are created with no thought, purpose or care by money making greedy irresponsible breeders and puppy mills. For that reason there are a lot of negative criticisms of these dogs.

However some are being done with thought and care so try to find a good breeder if this the dog you really want. We do not know really when, where or why the Bullypit was first bred. So at the moment all we can do is look at the parents to have a guideline of what goes into the mix. Please keep in mind no matter what the breeder promises you there are no guarantees with most designer dogs when it comes to what traits or looks they inherit from each parent. Even litter mates can be very different.

More specifically, the Pitbull Bulldog mix came from two breeds which we shall elaborate below:

Bear and Bull Baiting were two of the most popular spectator sports in England up until 1835. Dogs were bred and used to bait these animals and then later became dogs fighters when that was banned. This meant they were bred to be aggressive, courageous, tenacious. But they were also bred to never bite their handlers so that the humans involved did not have to worry about being attacked. When they were brought to America they were used on farms to hunt game and to guard the property. They were bred to be larger too. Breeders also focused on developing a dog who remained strong and courageous but was also family friendly and gentle.

Today we see their success. The dog when he comes from a good breeder, is confident, alert, friendly, courageous, and very loyal and affectionate. This dog too would happily try to be a lap dog despite his size. He will protect you and his family if there is something putting them at risk.

The Personality of the Bullypit

A well trained and well socialized Bullypit will be a dog that is protective, reserved to strangers and other dogs, a great family dog, and is a cheerful and loving dog. The dog should not be aggressive. In fact, the Bullypit should be a very sweet dog. She loves to have fun, needs lots of attention and is very brave and loyal. Sometimes she will be quite entertaining with her antics but at the same time she is a good watchdog and guard dog. She is quite energetic so will need lots of play and so on.

The Looks of the Bullypit

She is a medium to large dog weighing 40 to 80 pounds and standing 20 to 24 inches tall. She has floppy or rosebud ears, a black nose, broad head and a muzzle that is short. Her body is thick and strong and her tail is long and tapered. Her coat is short and fine and comes in colors such as black, tan, red, yellow, gray, golden, cream and white.

More about the looks of a Bullypit is in this article by Dog Breed Plus.

This blog post talked about the Pitbull Bulldog Mix as a puppy. The appearance, needs, and grooming of this dog were also addressed in this blog.

How active does the Bullypit need to be?

She is quite active so needs a lot of activity each day to stay well behaved, happy and healthy. Included with that should be some mental exercises also. She would be best with owners who enjoy being outside and active themselves, jogging, running, long walks and so on. Visits to the dog park would also be a good idea as long as socialization has occurred and she is well trained.

Does the Bullypit train quickly?

She is moderately difficult to train as she can be dominant and needs firm handling and ideally experience. You need to be consistent and positive in your approach. Daily sessions are important. You should start early socialization and training as soon as you have her. Weak owners will struggle to establish themselves as pack leaders and will have a dog who rules which means you could have behavioral and aggression issues.

How much grooming is needed in a Bullypit?

She sheds low to average amounts but it can increase during the seasons for shedding. Brushing should be done two or three times a week when she is not shedding too heavily, or daily if she is. You may need to clean up after her and deal with hair elsewhere like the furnishings. Because her coat is short and smooth you can use a damp washcloth and wipe her down now and then, it will help remove loose hairs as well as keep her clean. A bath can be just for when she is especially dirty. You will need to brush her teeth two to three times a week, check and wipe her ears clean once a week and then clip her nails or have them done at a groomer when they get too long.

What is the Bullypit like with children and other animals?

For the Bullypit to be a well rounded dog who is able to be social, get on with other animals and dogs and be trustworthy with children she needs the training and socialization early on as mentioned above. When that happens she is good with children, playful and affectionate and sweet. She does have a tendency towards aggression when it comes to other dogs, and her instincts tell her to chase small pets. With enough socialization and training from an experienced owner she can overcome those traits.