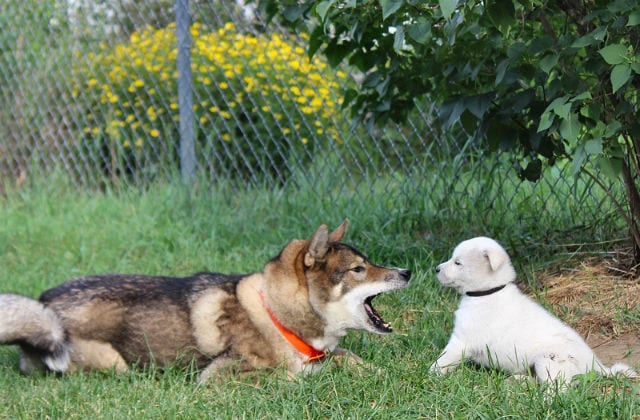 This blog post will talk about what the possible reasons are for dogs to hate other dogs. It will also cover topics like what one should do when their dog hates other dogs and how to get a dog to like another dog.

My Dog Hates My New Puppy

Dog aggression is a serious problem, especially if it becomes the source of conflict between two neighbors. When your dog and your neighbor’s dog does not like each other, the relationship you have with your neighbor could possibly deteriorate and you will be enemies for the next five years. You cannot make your dog like other dogs but it is positive that there are things you can do to help them moderate their inappropriate social behavior.

When dogs react aggressively toward other dogs, Pet Barn believes it is because of two major reasons. First, fear. This happens when your dog believes the other dog represents a threat and this could be a threat to their status or safety. It is also possible that the threat they perceive is for you, when they are trying to protect you against an apparent threat.

In some cases of dog aggression, this is prompted by inadequate socialization or a traumatic incident from the past that made the dog the aggressive and hateful dog that it is.

The signs that your dog dislikes other dogs could be any of the following:

How do dogs know that other dogs are not to be liked by them?

Dogs communicate with one another using their body language. When they see something in the body language of other dogs or pick up olfactory clues that signal them if the other dog is not to be liked, it is only a matter of a few seconds before they start to attack the other dog.

The fact of the matter is dogs have a powerful smell. When they see dogs even from a significant distance, they can sense smells and body cues which humans cannot, so they are much quicker to realize whether or not another dog is likeable by them.

Furthermore, a dog may not like a dog from its historical experience. For example, if a dog is attacked by another dog, a display of intense fear and aggression toward every other dog it sees may be possible.

Sometimes, the reason why dogs hate other dogs could also be about you! When they are too possessive of their owners, they might become aggressive because they would not want you to be near other dogs who they see as a potential threat.

What could be the causes of dog aggression toward other dogs?

In some cases, adult dogs who have been rescued from certain dog fighting operations may likely show aggressive behavior toward other dogs because this experience may have been traumatic for them.

What are the symptoms of canine-to-canine aggression?

Dog aggression can be signaled by growling, biting or snapping, lip lifting, staring, and lunging toward the other dog. Some severe cases, however, happen when the dog exhibits fearful or submissive body postures and expressions such as crouching, tucking of the tail, and backing away.

How do I recognize fear-based or defensive aggression toward unfamiliar dogs?

You can diagnose what kind of aggression your dog displays by observing its body postures and reaction when faced with another dog. However, you cannot be completely certain about your diagnosis as this may change over time depending on the consequences of the interaction.

If the dog learns that the aggressive display stops encounters, then this behavior tends to increase in terms of intensity and their body postures may become more confident. It is important therefore not only to observe the expressions and posturing at the present time, but also those from the initial few encounters.

The dog who exhibits fears toward the other dog often has its tail tucked, ears back, and may lean against the owner and attempt to get behind them. The approaching dog may be barked at by the fearful dog, which will lunge and back up at the same time. The dog may also avoid eye contact.

This is a behavior that is a result of aggressive attacks from which the fearful dog did not escape from and sustained injury from. Some dogs who had insufficient early socialization with other dogs will also lack the social skills required to interact playfully and comfortably with other dogs.

When multiple dogs are present, if one dog is highly aroused and unable to be calmed or controlled by the owners this dog may incite the second dog to become fearful or defensive, which ultimately leads to aggressive displays from both dogs.

The owner could have also played a role in answering the question why the dog is so fearful and/or aggressive when faced by other dogs. One instance that proves this is when the owner signals tension via leash tightening responses that signal that the approaching dog is of concern. Additionally, a frustrated, anxious, or worried owner will make the dog notice the owner’s reactions and associate them with the approach of the other dog. This will likely result in the dog becoming more defensive and aggressive toward other dogs it meets.

An owner who tries to calm their aggressive dog may serve to reinforce the actions the dog is engaging in at the time but an owner who threatens and punishes the dog in an attempt to stop the behavior will only incite heightening the dog’s fear and anxiety in relation to the stimulus.

It is important therefore that the owner has good control that will help calm the dog when faced by unfamiliar dogs.

More about this is elaborated by this article by VCA Hospitals.

How do you deal with an aggressive dog?

You can deal with dog-to-dog aggression using behavior modification and positive reinforcement training. It may be difficult and be a slow process at the onset of its application but it is absolutely plausible.

You can use the clicker training or what is most commonly known as mark and reward which is a form of positive reinforcement of dog training. The clicker or marker communicates the exact moment your dog does what you want. The timing of the click is essential and every click must be followed by a reward. You can use this training as an opportunity to correct your dog’s behavior.

This blog post talked about what the possible reasons are for dogs to hate other dogs. It also covered topics like what one should do when their dog hates other dogs and how to get a dog to like another dog.

Why is my dog aggressive toward some dogs but not others?

Dogs are just like humans. Humans like some people, but dislike others. We may dislike people who abused and maltreated us in the past and like people who treat us well. This is the exact same case for dogs. For example, if a dog has been attacked by another dog, it might exhibit intense fear and aggression toward that dog, and dogs who look similar to the dog that attacked it. On the other hand, it may like dogs that it used to play with or dogs that were raised beside it.

How do you stop a dog from being aggressive toward other dogs?

Have your dog engage in activities that will redirect its attention to something else when it is being aggressive to other dogs. Activities like walking with the dog to the park or playing fetch with it will help your dog be more comfortable with the environment he is surrounded with, especially the dogs. It is never too late to socialize your dog with not just other dogs but with humans, as well.

Is it too late to socialize a dog?

No. It is never too late to socialize a dog. Dogs can be socialized at any time of their lives, but science says dog socialization is more important between the age of 8 weeks and 4 months old. However, this does not dictate that when your dog has passed this age limit, your dog is already unable to socialize. Having your dog become friends with other dogs will not only help you feel like you are a good dog owner, your dog will also have lesser tendencies to be aggressive when around other dogs.

Can you train aggression out of a dog?

Yes. But training alone will not be enough. Aggressive dogs may also need medication to help manage their aggression problem. It is therefore important to understand that a dog experiencing fear, stress, or anxiety is incapable of learning new things. Think of medication as a tool to help your dog overcome this fear.

How do I socialize my shy dog with other dogs?

Walk! This is perhaps the only effective way so your dog can overcome shyness when around other dogs. Walking helps your dog meet other dogs in the park. This means that there is a higher chance that your dog will realize that other dogs are not that bad after all. So walking it regularly, perhaps even daily, will help your dog be more confident of itself.