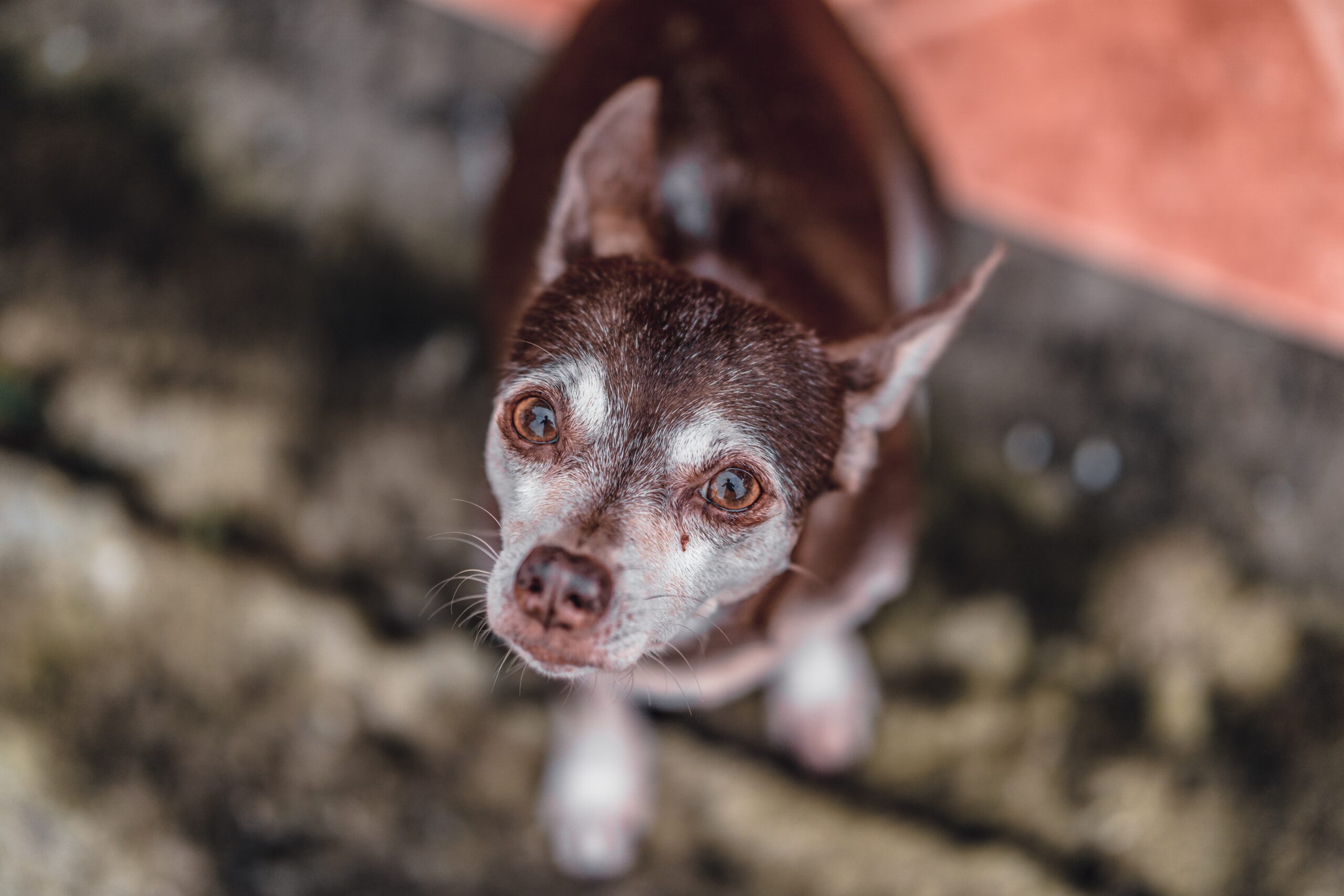 In this blog post, we discuss the origins of Chihuahua dogs. We discuss why and how were Chihuahuas bred, the character, the size, and the evolution of this dog breed.

How were Chihuahuas bred?

Chihuahuas were bred as a result of the cross between other ancient races (eg. the Techichi dog) that inhabited ancient Mexico. According to one theory, the Chihuahuas were bred to be offered for sacrifice. The role of Chihuahuas was to guide the souls of the dead to the grave. Unfortunately, this meant that Chihuahuas had to sacrifice their lives during funerals.

Another theory goes that the Chihuahuas were already used as sacrifices in ritual ceremonies among the Aztecs. Some even go back even further and believe that their ancestors were already owned by the Toltec people. The Chihuahua breed would thus be more than 1000 years old.

The Chihuahua is a typical breed of Mexico, so much so that it gets its name from the homonymous Aztec state, Chihuahua, unlike the popular misconception that it was the dog that gave the place its name. The official name of the breed is Chihuahueño, although it was deformed to Chihuahua by the Yankees due to the difficulty of pronouncing the letter “ñ” in some languages.

As for the origin of the smallest dog in the world, there are several theories. Is the Chihuahua Chinese, Mexican, European, or could it be Egyptian?  Well, like most dog breeds, its origin is uncertain.

However, the most feasible hypothesis seems to be the one that indicates that it is a race from Mexico since traces of them have been found, prior to 1519, in several engravings of the Mesoamerican cultures of Mexico, as well as statues of the Chihuahua in the pyramids of Cholula in Mexico, which seem to indicate that the Chihuahua was part of religious ceremonies of the Aztecs.

But there are other theories that are less interesting about the origin of the Chihuahua.

The origins of Chihuahuas

The first of them, and directly related to the hypothesis of its Mexican origin, says that this breed lived in the wild in the Mexican state of Chihuahua and that they were domesticated by the people of the region, at the beginning of the 16th century, until they reached all of pre-Columbian Mexico through trade.

Some comment on the possibility that the ancestors of the Chihuahua lived in Egypt about 3,000 years ago and refer to the many small mummified dogs that have been found in these lands.

Another theory says that they were brought by the first settlers who passed through the Bering Strait, or that they arrived in Mexico thanks to the Spanish in colonial times from China, and that later the conquerors took them back to Spain and that is where they are walking around Europe.

Regarding their background, experts explain that the Chihuahueño is the result of the cross between other ancient races that inhabited ancient Mexico.

Therefore, everything seems to ensure that the Chihuahuan has pre-Hispanic origins. Be that as it may, at the end of the 19th century, North Americans discovered this tiny dog ​​in the state of Chihuahua and named him after the state where they found him.

Chihuahua: Size, evolution, and other names

Chihuahueños are best known for their small size and long, straight ears, and short fur. However, the AKC (American Kennel Club) recognizes two varieties of Chihuahua: the long-haired and the short-haired. While its color has many variants, from different shades of brown to gray, through tricolor, with lines and speckles.

Regarding its size, the breeding standards for this dog do not generally specify a height, only a weight and a description of its general proportions. As a result, height varies more than within any other breed. Generally, the height range is between 15 and 25 cm at the crosses.

However, some dogs grow up to 12 to 15 inches. AKC show dogs must weigh no more than 2.7 kg; FCI standards state that dogs must weigh between 1.5 and 3 kg, although smaller dogs are accepted at the show.

Nonetheless, pet-quality Chihuahueños can weigh up to 4.5 kg or more if they have a bone structure that allows them to be overweight. This does not mean that they are not purebred Chihuahueños, it only means that they do not have the requirements to enter an exhibition.

Larger Chihuahueños are seen equally in the best and worst bloodlines. Commonly their teeth are double, this shows the purity of the breed.

On the other hand, the Chihuahua is disgusted by different nicknames and unofficial terms. Thus, it is said that Chihuahuas are “toy” dogs in reference to their small size.

We also know the nickname of the “deer head” Chihuahuas, which is the original Mexican, it was abroad where its appearance was modified through crosses with other races giving rise to its evolution to its current predominant appearance.

That is when his general appearance begins to change now with a more prominent head and a more robust body and it is precisely abroad where, when establishing the racial norm of the breed, this type of modified Chihuahueño is established as the standard when the original is the deer type.

The damage to the original breed went even further by disqualifying the type “deer” and qualifying it as an “abnormality”. “Deer” or “deer head” are terms sometimes used to describe Chihuahueños that do not have the standard “apple head” appearance of the breed.

The character of the Chihuahua

This little one loves his clan, so he will always prefer to share space with those of the same race than with other animals. This furry is usually as observant and cunning as it is affectionate and playful. Like many breeds of dogs, he is very loyal and enjoys being with his family.

In the event that there are children in the house, it must be taken into account that the size of this puppy makes it somewhat fragile, so the little ones should be taught to be careful with it, especially when they are playing.

Physical characteristics of the Chihuahua

Color: all are allowed.

Hair: there are two types, those with a layer of long, wavy hairs, soft to the touch; and others with short, shiny hair and tight weft.

Tips for taking care of a Chihuahua

It is always important to take care of the health of our pets from the basis of food. Always offer him quality food suitable for his breed and size. With this little one, you can’t go wrong, since Royal Canin has designed a specific feed for them.

To protect your friend on cold days, give him a collared coat this Christmas that will keep him warm and happy. These little ones have surprising intelligence, but they also know that they are adorable, so they always pretend to get their way.

We suggest that you train your puppy to avoid behaviors that you do not want as an adult. Always respectfully show him who’s in charge. This little dog can get his quota of daily activity just by playing around and following his family around the house.

If you want to take him out for a walk, in addition to wearing him on a leash like Trixie’s, you must be careful not to demand too much from him. If you see that he begins to get nervous or that it is difficult for him to keep up, stop the walk or pick him up and take him for a while so he can rest and recover.

To finish, it is necessary to say that the Chihuahua is a happy and friendly dog, contrary to the generalized belief that they have a bad temper. He is alert and very good at alerting to strangers, although he does not like having his nails clipped or his teeth cleaned. He lives for more than 15 years, he is intelligent and he loves training and playing. And above all, he is an excellent companion.

There are different theories about where Chihuahuas come from, one of them is that the dog is of Chinese origin and that it was the Chinese who brought it to Mexico. Another theory is that it descends from an ancient Egyptian race, called techichi.

There are more theories, but they are not proven, others are impossible, some are mere legends. Anyhow, the bottom line is that Chihuahuas can be great dogs that are very loving and caring towards their owner.

FAQ on How Chihuahuas were bred

Why were Chihuahuas originally bred?

Chihuahuas were originally bred for many reasons, among companionship, religious ceremonies & rituals, and food.

The Chihuahua’s origins are believed to be Mexican. The chihuahueño or chihuahua receives its name from Chihuahua (state of the country of Mexico), which was the place where it was discovered and domesticated.

Are Chihuahuas dogs or rodents?

The Chihuahuas are dogs, not rodents. This is a breed of dog who feels at home in the handbag of Madonna, Britney Spears, or even Paris Hilton. But this Mexican-born dog breed is much more than a premium pocket animal!

What food should Chihuahuas eat?

The type of food depends on individual factors, such as your dog’s age, weight, activity level, or state of health. However, nutritious food for Chihuahuas contains a lot of animal protein. The first source of protein for the chihuahua remains meat.