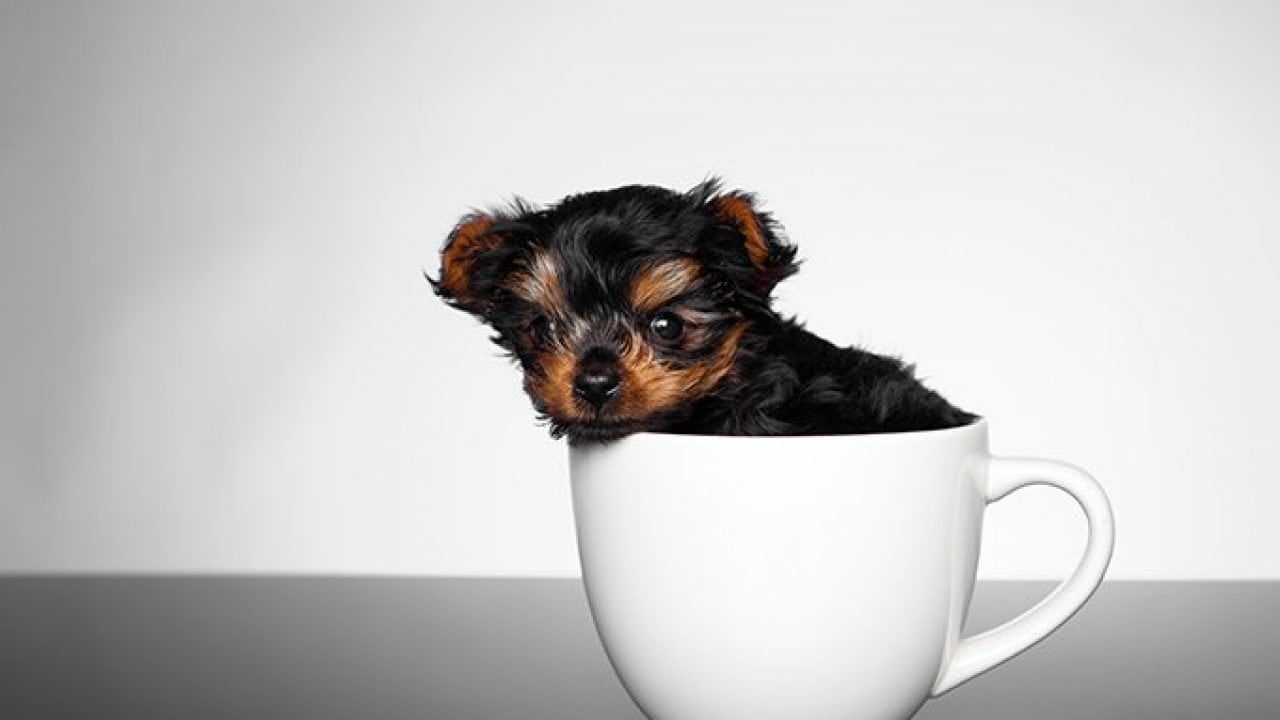 In this article, we answer the following question: How much does a teacup Yorkie cost? We speak about the origins of this breed, its characteristics and how to take care and train a Teacup Yorkie, that is if you decide to either adopt or buy one.

How much does a teacup Yorkie cost?

In 2020, a teacup Yorkie can cost between $1200 – $2000, depending on the seller and on how good of a negotiator the buyer is. When buying a Yorkshire Terrier you can spend up to $10000, depending of course on the country you buy it from, the buyer’s expectations and needs.

People tend to forget that a Yorkie is purebred. This is the biggest factor influencing the price of Yorkshire Terriers. A teacup Yorkie is harder to find, therefore even more expensive.

Yorkie puppies with an aristocratic pedigree that are the offspring of champions of the American Kennel Club (AKC) in the US are at the top of the scale when it comes to high prices.

The role of the Yorkshire Terrier today is indisputable. Known worldwide, it took very little time to spread throughout Europe and the United States. Maintaining their size and coat at all times as their main hallmarks. The expansion of dogs as a species in homes around the world caused the Yorkshire people to find their niche easily.

In the United States, it became the most popular breed in 2002. Real merit considering the current population and the heterogeneity of social classes and personal preferences about dogs.

In Europe, its success has also occurred, but more moderately. The different cultures present together with a huge number of races. They have caused it to be limited to families with young children and older people who cannot handle larger dogs.

It is a perfect dog for people looking for an easy-to-care animal. A pet to play with whenever he wants. Besides, being so small it adapts well, it is capable of living in urban flats, it does not need large spaces.

Specifics of the teacup Yorkie

While the standard weight of this breed of dog is only 3 kg, the teacup Yorkie (or the Mini Yorkie) reaches a maximum of 1.5 kg as an adult. They are called “teacup” precisely because they can fit in a cup of tea.

In reality, it is a highly criticized variety of the breed, because many believe that a greater reduction in size can cause very significant health problems, in addition to higher medical costs, and it also has a shorter life expectancy.

The miniature Yorkie is a Yorkshire Terrier that has been bred to be significantly smaller than normal. It is considered one of the smallest dogs in the world.

Although a Yorkshire Terrier can weigh up to 7 pounds (the maximum approved weight for the Yorkshire breed), the teacup typically weighs 2 to 4 pounds and is 4 to 5 inches tall. Despite being recognized by many as a purebred dog, they are not eligible for official dog shows.

It should be noted that teacup Yorkies are prone to certain size-related health problems, such as brittle bones and bladder problems.

The Teacup Yorkie/Yorkshire mini/Yorkie mini/Yorkshire toy is a miniature breed dog classified by the FCI as group 3 (Terriers) and section 4 (Companion Terriers).

The origins of the teacup Yorkie

The mini Yorkshire Terrier belongs to the miniature dog family and originated in the mid-18th century in England. It arises as a result of the immigration of Scottish workers to the mills and cotton factories of the county of Yorkshire. With them came different types of Terriers that gave rise to the Yorkshire Terrier that we know today.

Characteristics of the teacup Yorkshire Terrier

According to the FCI standard, the smallest of the British Terriers is a dog with almost square proportions and of great elegance due to its posture and gait.

Its head is small and has a flat skull, with a rounded and slightly marked shape. Its nose is black and has a scissor bite, like most small dogs. Also, his upper teeth must be more advanced than the lower ones. Their ears are erect and straight, in the shape of a triangle, with a short coat of hair, unlike the rest of the body.

As for its tail, it must be straight and stretched with a lot of hair and blue tones at the end of it. In the past, it was common to amputate it, although it is not recommended nowadays.

The coat is one of the most striking characteristics of the teacup Yorkshire Terrier. According to the standard, the hair covers the entire body and must be completely smooth. It has a natural shine and is soft to the touch. It has fine hair and not very dense since otherwise, it would have difficulties when walking.

On the other hand, the hair falls to both sides of the body evenly, which gives the teacup Yorkie Terrier a very neat and elegant appearance.

How big is a teacup Yorkshire Terrier?

Teacup Yorkshire Terriers are between 20cm and 30cm in size approximately, with a weight that ranges between 2kg and 4kg.

The Miniature Yorkshire Terrier is one of the most beloved dogs due to its gentle nature.

The first thing that will catch your attention is the sociability of our friend in the presence of people he does not know. Although it is common for other dogs to become over-excited to unfamiliar faces, to be aggressive or too shy, the teacup Yorkshire Terrier has a friendly character in the presence of any human.

This breed is a companion dog, although it is also considered a great guard dog that will always be ready to protect its home and its owner. His genius on the occasions he requires it is added to his great ability to retain information, so you can be sure that he will never forget an enemy’s face.

In turn, the mini Yorkshire Terrier loves to play with its owner. He loves simple games, such as playing ball. His affectionate character will make the owner, at times, tend to pamper him too much. You should not do this under any circumstances, as he will soon get used to bad habits.

How to care for a Teacup Yorkshire Terrier?

The first thing to keep in mind is that teacup Yorkshire is not an easy dog to breed. Due to their small size and caring nature, we tend to treat them as helpless beings when, in fact, they are not. Below we will guide you on how to raise one of these dogs.

The teacup Yorkie has to have a special diet due to its beautiful coat. Ideally, feed it with food rich in fatty acids and omega 3 that will help keep its hair long and shiny. The kibbles must be special for miniature dogs since their small jaw does not tolerate the usual feed.

Avoid giving him homemade food as it tends to cause gastrointestinal problems.

How to wash a teacup Yorkie?

Keep in mind that, due to its extensive coat, the teacup Yorkie requires certain care when bathing.

The bath must be done once a week, as it will tend to accumulate more dirt in the hair.

Before bathing it, try to comb it as much as possible, since wet hair will be much messier. This way you will avoid having to use products to detangle the hair. It is advisable to comb it in the direction of the hair’s growth.

Use a special acid-free shampoo for dogs to avoid damaging their delicate skin. Use it twice. Afterwards, apply a little softener to keep the hair shiny.

Avoid getting the shampoo into his eyes, nostrils or ear holes.

How to style a teacup Yorkshire Terrier?

Do it in parts. First, you have to use a special brush with steel spikes. Follow the direction and direction of the hair, because if you don’t you run the risk of creating knots.

If you find knots, it is best to try to untangle them with your fingers. Watch the areas where it can create certain discomforts, such as the anus or the joints. In the worst case, you can choose to cut the knot with scissors. You can also use scissors to cut the hair and thus obtain a short-haired Yorkshire Terrier.

How to train a Teacup Yorkshire Terrier?

The first thing to keep in mind is that the Miniature Yorkshire Terrier is a small dog with the character of a large dog. They are not fast learners, but they are a breed suitable for training and will eventually learn what they need.

One of the actions we will carry out will be positive reinforcement. To do this, we will reduce your daily food rations to give you small food rewards when you fulfil any of our orders.

You mustn’t use unnecessary punishment. Dogs don’t react the same way humans do to negative reinforcement. She will only understand that you show her the attention she needs, and she will take it as a reward. Ignoring any wrongdoing you do is often more effective, as is using rejection tones such as “Not like this!”

You have to be constant and logical in your commands. If you train your teacup Yorkie toy not to get on the bed, you cannot make any exceptions, as you will create unnecessary confusion. Remember that dogs do not think the same as humans.

Remember that your little dog’s time is much more valuable than yours. What for you is 5 minutes, for them, it can be much more. To keep their full attention you must do short and constant workouts.

In this article, we answered the following question: How much does a teacup Yorkie cost? We spoke about the origins of this breed, its characteristics and how to take care and train a Teacup Yorkie.

Any purebred dog is going to be expensive. That is because, first of all, breeders need to take special care of them, and secondly – because they are trendy.

Nevertheless,  we want to remind you that regardless of the dog breed you choose as a companion, a dog will bring you immense joy in your life (whether it has royal blood or not).

FAQ on How much does a teacup Yorkie cost?

How much does a micro teacup Yorkie cost?

A micro teacup Yorkie can cost between $1200-2000. The prices vary according to circumstances, the country you buy it from, a seller’s expectations and needs.

How big do Teacup Yorkies get?

Adult teacup Yorkies weight on average 4-7 pounds (1.5 kg). If a mini Yorkie exceeds this weight, it is probably not purebred. They are called “teacup” precisely because they can fit in a cup of tea.

Why do Yorkies cost so much?

Yorkies cost a lot because they are considered a royal breed. Yorkie puppies with an aristocratic pedigree that are the offspring of champions of the American Kennel Club (AKC) in the US are at the top of the scale when it comes to high prices.

What is the average price of a Yorkie?

The average price of a Yorkie is round $1200 – $1500 for a typical companion Yorkie. However, prices are negotiable most of the time.

Yorkies are not more expensive to take care off than most of the dogs. Food for a Yorkie may cost you around $300/year. But you should add to the bill veterinarian care, toys, tickets (if you want to travel with your dog).