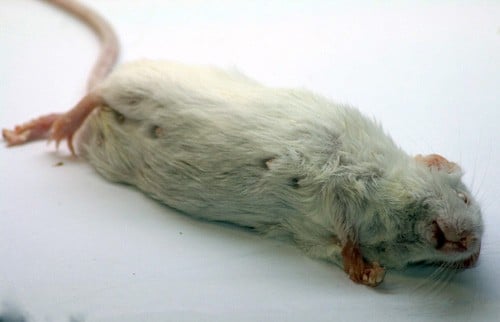 In this article, we will answer the following question: How long can I leave a frozen mouse thawed? We will talk about a snake’s digestive system, the food they prefer and how to feed a snake with thawed mice.

How long can I leave a frozen mouse thawed?

You should not let the frozen mouse thawed more than 2-3 in the fridge because it will start to rot. The rat begins to deteriorate already at the time of slaughter. This process can be defined as an unpleasant change from its normal state. Some of these changes are detected through smell, taste or sight, although sometimes they are imperceptible to the senses.

Oxygen, essential for life, can have harmful effects on fats, vitamins and other food components. In general, oxygen can provide the conditions for microorganisms to grow or cause oxidation. I think it’s needless to say that a rat that has started to decompose can be harmful to the snake.

To defrost food use a sealed bag, knotted at the top and quickly thaw food in warm water. The mouse must be warm when you offer it to the snake. Some snakes perceive body heat with the help of thermal pits on their snouts, so the prey offered must have a temperature close to that of a homeothermic animal.

It is preferable to teach the snake to eat outside the terrarium so that the animal does not think that when you walk in the terrarium it will be fed and use long tweezers for feeding.  If you hold the mouse by the hand, soon your snake will associate the food with the hand and unwanted accidents can occur, it is still a predator.

If you want to manipulate the snake, be careful not to have any traces of blood, food, the smell of another animal or any potential factor that could incite a snake to attack. Wash thoroughly with soap and water before feeding or handling it!

If the snake is properly fed, it will shed once a month. During this period it would be better not to be fed. To prevent any health problems, it is advisable to check the snake’s faeces and make sure that it is not constipated because this can be fatal.

The terrarium must be disinfected weekly and the water and food vessels must be cleaned occasionally. Also, don’t forget to check the temperature and humidity and change the water every day. Make sure there is no food residue in the water or the excrement. The layer of sand, carving, recycled paper or anything else used must be changed monthly, and decorative objects such as twigs or stones must also be cleaned periodically.

How to feed the snake with thawed mice

How often do you have to feed the snakes?

First of all, we must bear in mind that reptiles are one of the animals that can go the longest without eating food. Unless they must drink, they can spend quite long periods without eating anything and with little effect on their health.

Next time you are wondering: “Can a ball python starve itself to death?” remember that the frequency of feeding in a snake depends mainly on its size. In a very general way, since there will always be exceptions, snakes of less than 1 meter, such as land snakes and insectivorous and piscivorous shingles, usually eat between 1 and 5 times a week.

In contrast, small pythons that are between 1 and 2 meters long, eat once a week. Larger pythons such as Indian and Caribbean pythons or boas are snakes of between 2 and 6 meters that eat once every two to four weeks, that is, once or twice a month.

Lastly, snakes over 6 meters, although rare in captivity, eat even less frequently. For example, they can eat large animals two or three times a year and thus have more than enough food.

Likewise, we must know that in general, snakes are more active in spring and summer, on the other hand, in winter and autumn they are less active so they tend to eat less. You also have to take into account when giving them food, that most prefer to eat at dusk or dusk.

How do snakes eat

Because snakes do not have claws to hold onto their victim by swallowing slowly, they must swallow it whole. Thus, their metabolism is very slow and digestion can take weeks or even months. The key to digestion lies in its gastric juices and its poison, in the case of poisonous ones. The gastric juices of these reptiles have an extremely acidic and powerful pH that allows them to digest even the bones.

Besides, they use their poison as a complement to digestion, since it allows them to break down the tissues before the gastric juices act.

Having a slow metabolism, they feed infrequently. This periodicity will depend on the age, the environmental temperature and the size of the ingested prey, so the period between bite and bite varies from 15 days to a month. For example, large snakes, such as anacondas, feed every 3 to 4 months. The diet of the different species is relatively varied: they are mostly carnivorous and must stalk, kill and ingest their freshly killed prey.

Most of the snakes feed on warm-blooded animals mainly rodents and small birds, while others eat frogs, insects and even others of the same species. Some species base their diet on the eggs of birds and reptiles.

The digestive system of a snakes

Venom glands (when they exist) are modified salivary glands and vipers can control the amount of venom they inject into prey or enemy. The tongue performs olfactory functions, so if a snake loses it can refuse to eat.

The digestive system is quite simple and usually consists of an almost linear tube between the mouth and the cloaca, although it has differentiated organs. The intestine does not have a developed musculature, as it is very compliant and food is propelled by the axial muscles. At the end of the intestine of snakes is the cloaca, where the genital, urinary and digestive systems converge.

On the other hand, its digestion is slow too, it can last days or months, and the secret lies in the gastric juices and their poison, in case it is poisonous. The gastric juice of snakes has a very acidic pH, which allows it to digest even the bones of its prey. Also, venomous snakes use their venom to break down tissues before gastric juices kick in.

Snakes should eat between 6 and 30 meals per year, about one meal every two weeks. However, some snakes can shut down their digestive system and not eat for many months, yes, after a big meal.

The oral cavity can increase in size to swallow large prey due to the lack of fixation of the bodies of the mandible since they are united by elastic ligaments with great distension capacity. Snakes do not chew their prey but swallow it whole. Its teeth are used to retain prey.

The teeth of the maxilla are placed in four rows. In general, they do not present great morphological variations about their location, shape and sizes. Teeth are continually replaced throughout the life of the animal. Species with large fangs have a sheath-like fold in their oral mucosa to protect them when not in use.

In this article, we answered the following question: How long can I leave a frozen mouse thawed? We talked about a snake’s digestive system, the food they prefer and how to feed a snake with thawed mice.

To remind you, it is extremely important to ensure the quality of the food for your snake. This alteration of a mouse consists of the appearance of a dark stain that corresponds to an area in which the tissues have lost water and have become dry. If the mice have been frozen for a long time they can become rancid, which is quite unhealthy for the animal that ingests them.

FAQ on  How long can I leave a frozen mouse thawed?

How long can you keep a thawed mouse?

You shouldn’t keep a thawed mouse longer than 2 days in the fridge, and more than a few hours in the snake’s terrarium. After a while, the mouse will start to decompose and lose its nutritional value.