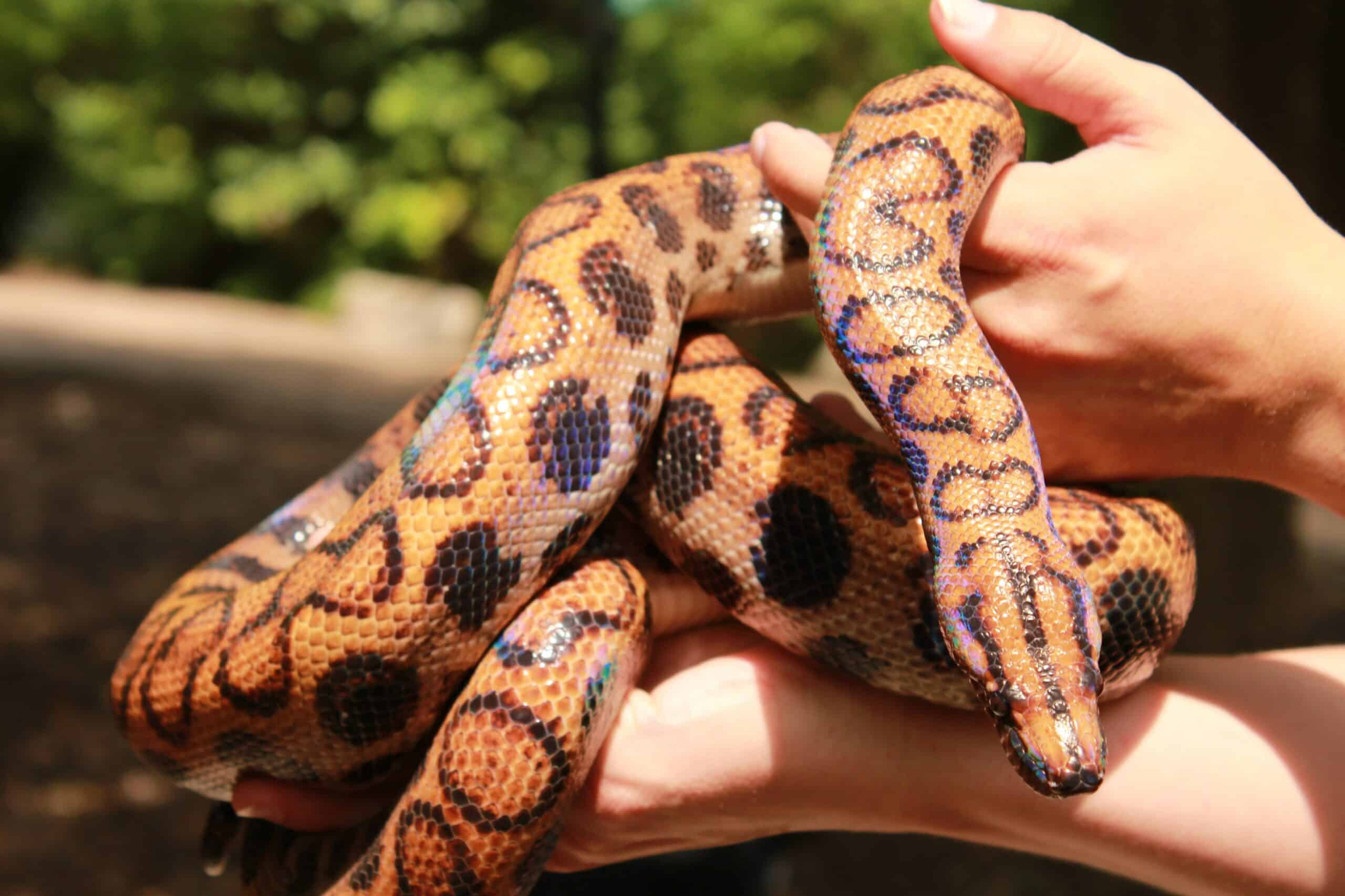 In this blog post, we will answer the following question: How long can a king snake go without eating? We talk about the diet of a king snake and also about its behaviour and care.

How long can a king snake go without eating?

King snakes, like most snakes, can live up to 6 months without eating. In the wild, snakes are used to living longer periods without food and they can reduce their metabolic rate by 70%, allowing them to conserve energy for extended periods while growing or during the winter when generally they are less active.

King snakes love to eat, and when they are babies they will be fine with a pinky every day or two. It is best if you get it used to eat frozen mice (which you should defrost before feeding, of course) as they grow.

When they are teenagers, you can give one or two mice for 2 to 7 days. It is better to give it several small preys than a large one since it will be able to digest them better and faster.

Once they have grown up you can give them 2 or more large mice or rats. Everything will depend on the size of your snake, you must monitor its growth.

What do king snakes eat?

In its natural habitat, a king snake usually feeds on rodents, lizards, eggs, frogs or birds. It is ophiophagus, that is, they feed on other snakes, whether they are poisonous or not, since they have a certain tolerance to the hemotoxic venom of them, although they are not immune. If a poisonous snake, for example, the rattlesnake, bites you, it can cause your death within a few hours.

In captivity, they can be given one mouse every twelve to fifteen days as food. It is convenient that these mice have been recently sacrificed or that they are frozen so that they do not attack our snake.

We can sprinkle the rodents with a vitamin or calcium supplement, sold in specialized stores. When they are young, they can be fed “pinkies” once or twice a week. After feeding them, it is not advisable to handle them, it will be necessary to leave them a time of at least 48, in order not to cause stress or vomiting.

Behaviour and care of a King Snake

It is a kind of docile and solitary snake, although it looks for the company in the hibernation season: this period usually begins in December, so three weeks before it is necessary to prepare them, suspending their food to avoid digestive problems.

The specimens that are weak or sick should not be allowed to hibernate, so you will have to continue feeding them.

During the morning and after sunset the Kind Snake is very active. It sheds its skin in winter, with which special care must be taken not to stop feeding. It is quiet, although you will have to be careful because if it is disturbed it can attack. I

n their natural habitat, they kill their prey by wrapping themselves around it, suffocating it. It does not see well from afar, although up close it has magnificent vision, being able to easily locate its prey. Besides, their sense of hearing is highly developed, easily hearing low-frequency sounds and feeling the vibrations of both their targets and the possible threats that may lie in wait for them.

Is the king snake dangerous or poisonous?

The king snake does not represent any danger since it is not poisonous nor do they seek to attack humans. The most that can happen to keep them as pets is that in a stressful or restless situation they bite you, and they can draw some blood from you.

The California kingsnake (Lampropeltis getula californiae) is one of the subspecies of the king snake, is one of the most popular in the United States. They can be found in California, Baja California, Arizona and Nevada, in forests and swamps.

These little California kingsnakes are 91 to 106 cm long, so they are not the longest variety. Its paint is black, white and brown as is customary in this genre.

As I mentioned earlier the California kingsnake is not poisonous, so there is nothing to fear.

The Mexican kingsnake (Lampropeltis getula nigrita) is an incredible subspecies of the Lampropeltis getula and it shocks you from the moment you look at it for the first time. And this little friend is completely black, and not just any black, but a shiny black thanks to its smooth scales.

Its habitat is usually the Sonoran Desert, Sinaloa, as well as parts of Arizona.

The behaviour of the Mexican king snake is that of a solitary animal, which hunts with the sun. It usually slaps its tail against the ground to make a noise similar to that made by a rattlesnake. Ironically, the rattlesnake, despite being poisonous, has the upper hand to lose to a king snake since its venom has no effect on it, and that makes it the preferred snack.

These can grow from 106 to 132 cm like the Californian ones.

Terrarium for the king snake

The enclosure you choose to build your terrarium for the king snake should have a top lid with enough air inlet, but hermetically closed and with the holes not so large so that your pet does not escape. Of course, some commercial enclosures are already perfect for snakes that you can buy.

It is best to get a 60-gallon terrarium from the start, as this will be the one you should use when your snake has reached adulthood and is no longer growing. Remember to give them enough ventilation, not to exceed their size, or close enough to slide.

Substrate: One of the best substrates for a king snake and many other reptiles is coconut fibre, it retains moisture, does not present toxic agents that could make your pet sick and the risk of swallowing it is minimal. However, this can be expensive for some breeders so sanitized litter, aspen shavings, or butcher paper are recommended.

Temperature: The king snake in its natural environment withstands extreme temperatures, from inclement heat during the day to severe cold at night. You should offer them a gradient that goes from 24 to 30 ° C during the day, while at night it can drop to 21 ° C. Remember that if you have many spaces the gradient must be both vertical and horizontal.

In the same terrarium, you must have a hot side and a cold side, which you can measure with the use of a thermometer in each space. You can use regulated heating pads under the substrate, incandescent lights, or room heaters. Remember to turn off the lighting at night so you don’t break into the cycle.

Humidity: These snakes do not need great humidity, it will be enough to put a large bowl, but not very deep. A bowl that you will have to change regularly since they will dirty the water and even defecate, which can cause disease in your real snake.

As you can see, these snakes are not complicated to maintain and surely in a few months they will be able to even speak by telepathy.

Remember to bond with the snake before handling it, which should be done with gentle and calm movements.

The king snake, like all pet snakes, can have very different prices due to their sex, age, condition and appearance. A common form of Florida or California can cost from $ 50 to $ 160. However, there are super rare pints that can go as high as $ 200.

The Mexican ones are more expensive and you will likely find them around $ 180 and $ 190, although if you are from Mexico there is the possibility that you will buy it much cheaper.

It is known of some specimens whose price reaches $ 600.

FAQ on How long can a king snake go without eating?

How long can a king snake go without eating?

A kingsnake can go up to 6 months without eating. However, you should not starve your pet snake, but feed it every 7-10 days.

Why is my king snake not eating?

Your king snake may not be eating because of the conditions of the terrarium, because it hasn’t digested the last meal yet or it may have an illness, in which care you should ask for a vet’s advice.

How often should I feed my Kingsnake?

You should feed an adult Kinstake every other 10-12 days. As hatchlings, kingsnakes should be fed more often – maybe once or twice a week.

In this blog post, we answered the following question: How long can a king snake go without eating? We talked about the diet of a king snake and also about its behaviour and care.

What you have to remember is that king snakes, like most snakes, can live up to 6 months without eating. In the wild, snakes are used to living longer periods without food and they can reduce their metabolic rate by 70%, allowing them to conserve energy for extended periods while growing or during the winter when generally they are less active.

Kingsnakes love to eat, so if your snake stopped eating, you should pay attention and try to find the reason why this happened.