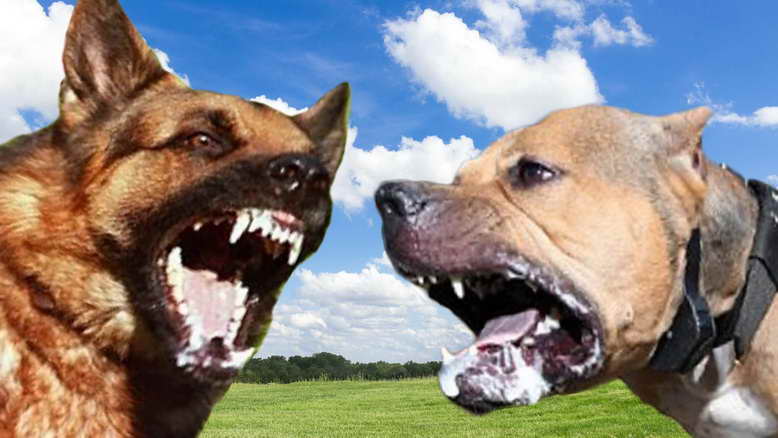 This blog post will talk about the outcome when the German Shepherd fights against the American Pitbull. Relevant topics like which breed has better assets will also be covered.

Yes, it is reasonable to have a comparison between the American Pitbull Terrier and the German Shepherd because both dogs have a reputation for being tough canines. Both dogs are also loving and affectionate with their close family, and loyal to the very end. If you are considering purchasing a canine that can be your best friend and is always going to be by your side, or under your feet, then the German Shepherd or the American Pitbull Terrier are viable choices.

The American Pitbull Terrier has a more sociable personality compared to the German Shepherd. It tends to be the life and soul of the party, the center of attraction, or the apple to the eyes of the guests. On the other hand, the German Shepherd has a more independent tendency. It tends to just sit and watch everyone at the party. It keeps its distance and makes sure that everyone is on their best behavior.

It is definitely a wonder whether a German Shepherd could beat an American Pitbull in a fight, or maybe even the other way around. The answer is, a German Shepherd can beat a pitbull. In fact, German Shepherds have a size and weight advantage, as well as a stronger bite force. However, pitbulls are bred to be fighting dogs, so a well-trained, well-fed, and aggressive pitbull can also beat a German Shepherd.

Both these breeds have a terrible reputation in society. They are horribly misunderstood and considered as hyper-aggressive and vicious dogs. There have been a good number of incidents that involve either of these dogs “manifesting violence”. These incidents are not because these dogs are inherently violent and aggressive, but just because they have had bad and irresponsible owners who failed to raise them.

Most owners who seek these dogs do not take the time to read about these breeds and learn about what measures to perform when training them to be good dogs. They just purchase these dogs from a pet shop, take pictures of them for Instagram, then leave them in a cage afterwards without considering their requirements for exercise, food, and nutrition.

Training these dogs is incredibly important, and should be done regularly. It also has to happen early, in other words, when they are still young puppies. These dogs are high energy dogs and therefore require a lot of energy-burning exercises. They also not only require training but also love and care.

Love Your Dog provides this chart that compares traits such as the height, weight, temperament between the Pitbull Terrier and the German Shepherd. These may help you determine which dog wins in each category.

There might be a solid chance that a German Shepherd wins the dog fight against the American Pitbull Terrier. It has advantages such as size and bite force. We shall go through these now.

In a clash between two dogs, size plays a major factor and it could be a crucial one. German Shepherds are simply bigger than Pitbulls and that could be why they would win the fight.

Another advantage that the German Shepherds have over American Pitbulls is that they actually have stronger bites than most Pitbulls. Dog bite strength is measured in PSI.

Compared to those differences, the advantage a German Shepherd has over a pitbull is very minimal. Since the difference is so small, a larger pitbull may have a stronger bite force than a weak German Shepherd.

However, American Pitbull Terriers are dogs that are trained to fight, and this is a truth we should accept in distinguishing advantages and disadvantages between the Pitbull and the German Shepherd.

This blog post talked about the outcome when the German Shepherd fights against the American Pitbull. Relevant topics like which breed has better assets were also covered.

Is a pitbull stronger than a German Shepherd?

What dog breed can beat a pitbull?

Rottweilers are one of the dog breeds that are highly capable of beating a Pit Bull. A rottweiler is larger in size than a Pit Bull. He is more intelligent, agile, stronger, and powerful when compared to a Pit Bull.

What dog can kill a lion?

According to an answer to a query in Quora, the Ovcharka Caucasian Mountain Dog is theoretically capable of killing a lion.

“Can A Rottweiler Beat A Pitbull? ( Here’s The Truth You Should Know).” The Home Of A Pet Blog, 12 Jan. 2021, epicpetclub.com/can-a-rottweiler-beat-a-pitbull/.

“Which Breed of Dog Can Kill a Lion?” Quora, www.quora.com/Which-breed-of-dog-can-kill-a-lion.