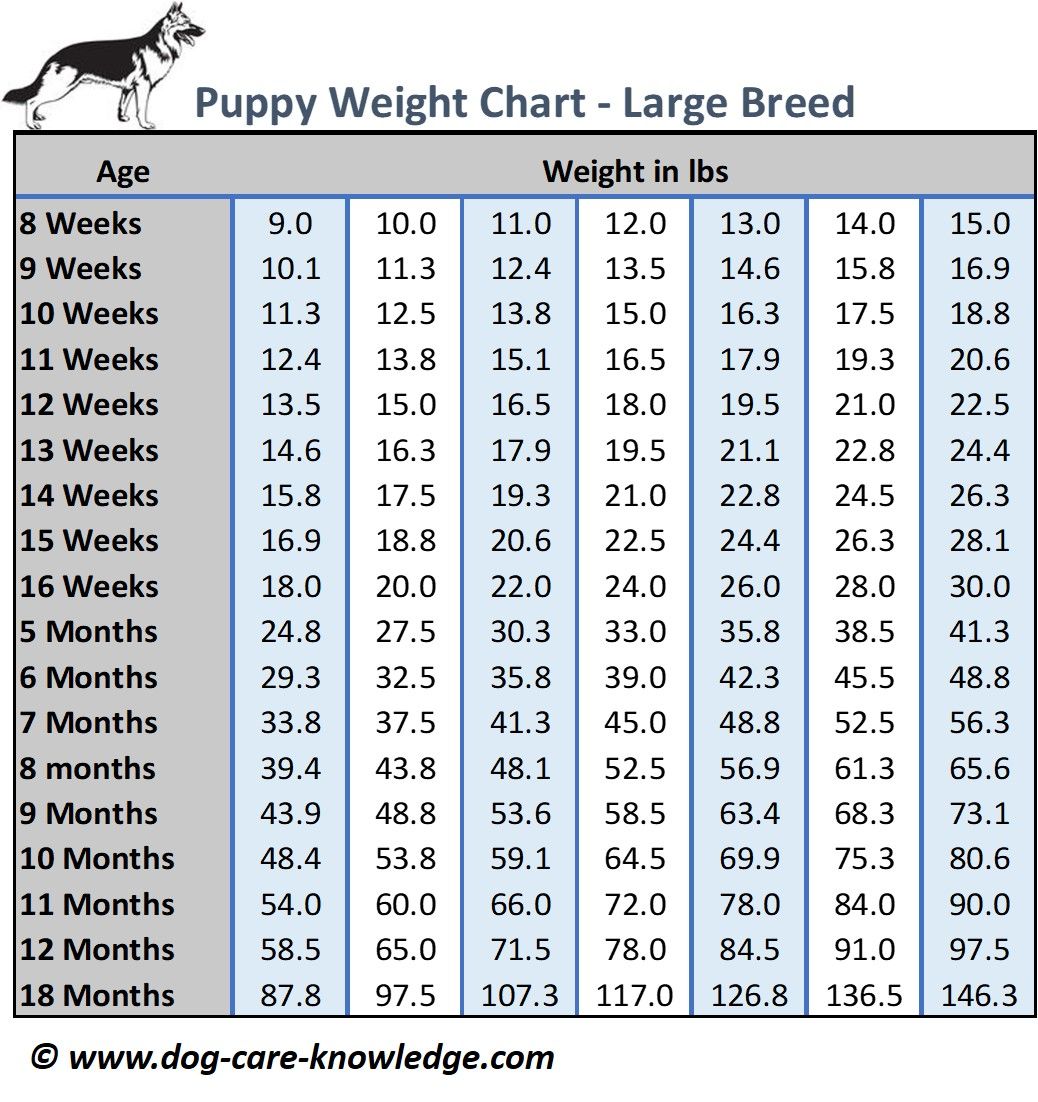 You can use this chart to check to see if your German Shepherd’s growth is on track. As with weight, there will be some dogs that fall outside of the ranges listed here, but that’s normal as long as your dog is otherwise healthy.

These charts will show you what your German Shepherd puppy will weigh as they grow to reach adulthood. One is for male puppies and the other for females.

Something to keep in mind is that dogs grow at different rates, so they may not reach the next weight milestone by that month or may reach it sooner. As long as they’re close and don’t have other problems, it’s normal.

These are the Male and Female German Shepherd Weight charts according to Animalso.

How much should a German Shepherd weigh?

Since each dog is going to be different, you need to look at their overall body condition rather than a weight range. Fortunately, there are body conditioning charts that you can use to figure out if your German Shepherd is at their ideal weight.

As you can see, it’s easy to determine if your German Shepherd is at the proper weight. Just look at them from the side and from above, feeling for ribs and pelvic bones when necessary.

While German Shepherds are generally thinner compared to other dogs of their size, you still shouldn’t be able to see or easily feel their ribs. Younger dogs will also typically be on the thin side before they fully fill out as adults.

What if my German Shepherd is not the Right Weight?

If your German Shepherd is diagnosed by a veterinarian as underweight or overweight for their age, then the first thing you should do is ask him or her to help you figure out the underlying cause of the problem. This will determine what should be done next.

For underweight German Shepherds, you may need to:

For overweight German Shepherds, you may need to:

How does a German Shepherd puppy grow?

It’s crucial to watch for each of these milestones as they come. These, more than weight or height, will help determine if your German Shepherd puppy is developing normally.

Here are the stages of German Shepherd puppy development from birth to maturity:

During this stage, a puppy is mostly helpless, and the mother will be responsible for feeding them, keeping them warm, and helping them eliminate waste.

Here are some of the developmental milestones to watch for:

Now that puppies can interact with the world and creatures around them, they begin to do so. It’s vital to begin socializing puppies at this point to become accustomed to humans.

Puppies should remain with their mother during this entire period even if they’re already weaned.

There are dog social skills that the mother teaches her puppies during this stage. If they are taken from their mother too early, they may have trouble interacting with other dogs later in life.

Here are some of the milestones of this period:

At this point, puppy development begins to slow down as they have done most of the development they need and will now primarily just grow larger. Near the end of this stage is when you’ll want to start puppy classes and start training your puppy.

Here are some important milestones that a German Shepherd puppy will go through at this stage:

As you already guessed, this is the point at which your German Shepherd will reach sexual maturity. By the end of this stage, they will mostly look like an adult dog, though they’ll still have some growing to do.

The most important thing you should do for your dog at this point is spay or neuter them. If you are planning on breeding your dog, then you’ll need to make sure they have good hips and overall formation to improve the breed.

Some developmental milestones during this period are:

At this point, there are no more major milestones for your German Shepherd to reach. They will, however, continue to grow during this time.

Female German Shepherds aren’t considered to be fully-grown until they are at least 24 months whereas some males aren’t seen as adults until 36 months.

Throughout this period, you should continue to feed them high-quality food for German Shepherds to ensure that they grow at the proper rate, allowing their hips to develop normally. By the end of this period, they should reach their adult weight.