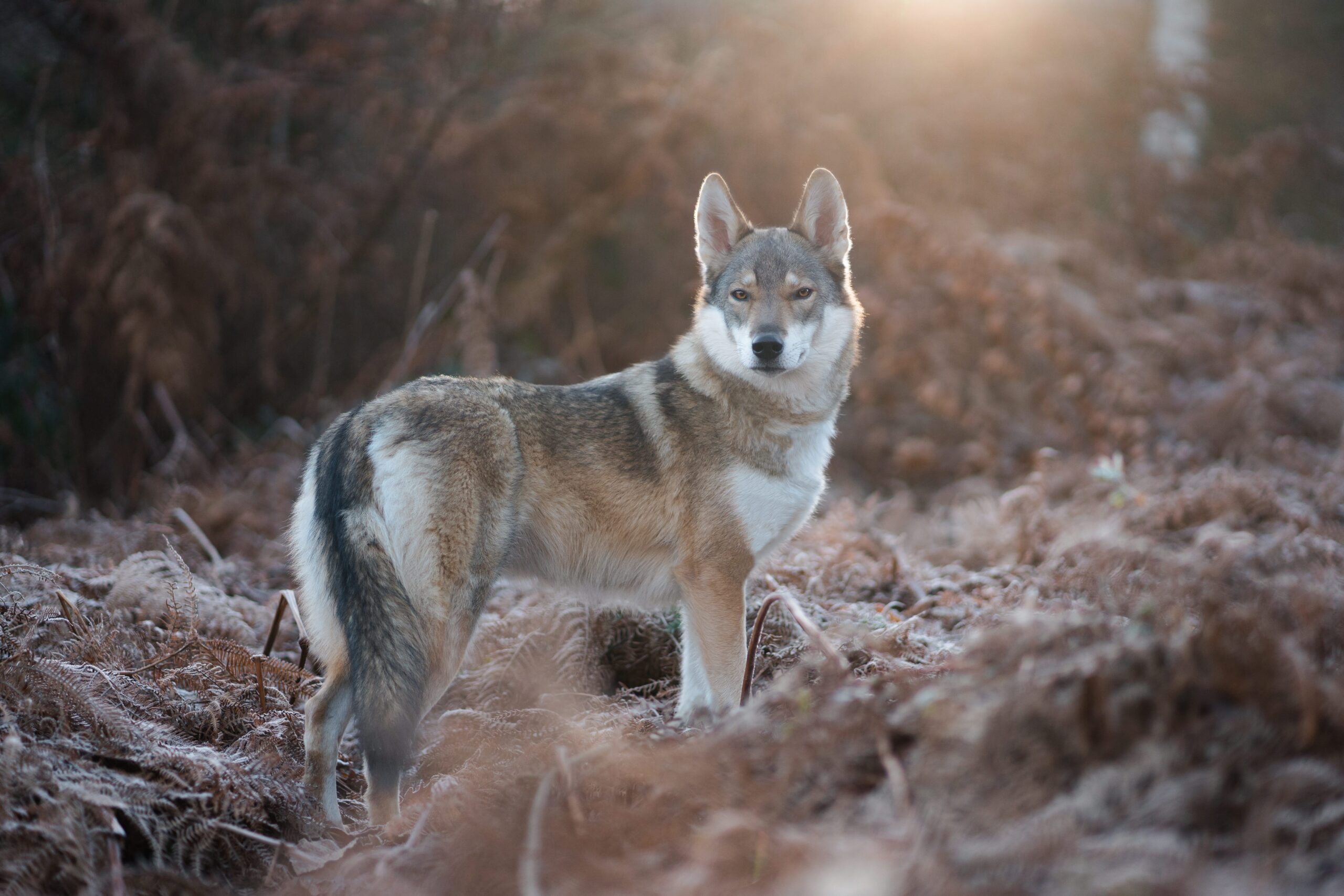 This blog post will talk about the result when a German Shepherd dog and a Coyote are mixed. Relevant topics such as the appearance, personality, and some tips about taking care of this dog are also detailed in this article.

This dog is also often referred to as the “coydog” or the “coywolf”. Obviously, the coywolf reference is a myth as the German Shepherd and the Coyote are both dogs rather than wolves.

The truth, according to Anything German Shepherd, is that the Coydog should be actually referred to as the “Coywolfdog”. Why? Because this dog is now an integration of the genes from the Coyote (60 percent), the Wolf (30 percent), and the Domestic dog (10 percent). These percentages can also vary based on where the hybrid canine lives geographically.

The Coyote Shepherd is not a common dog. In fact, some researchers categorize this dog as rare, so if you plan to own this breed, you must be very skilled and highly active. It requires someone who is prepared for an intelligent and extremely active dog for the success of raising this peculiar mix.

The Coyote is part of the canine family, but they are unlike dogs, particularly domestic dogs who are more civilized and less likely to become wild creatures. The coyote is a wild animal whose traits reflect that. These mammals are extremely smart. This is reflected by their cousins, the foxes, the wolves, and the jackals.

To communicate amongst each other, the coyote uses a multitude of forms of communication. They can speak with other members of their pack, but they also and mostly travel alone rather than with a pack.

North Americans can speak for the enormous population of coyotes in their place. At night, the mournful howls of the Coyote are heard throughout much of North America, and possibly even in the southern portion. Most often, the coyote howls at the moon, and these howls echo throughout the canyons and mountainsides. This is, in fact, a trademark sound by the coyote that is passed on to the coydog offspring.

Compared to the German Shepherds, Coyotes are only slightly smaller. The weight of the Coyote usually ranges between 20 and 50 pounds which makes them bigger than foxes but smaller than wolves, in terms of size.

The color scheme of the coat of the Coyote can range from white, tan, brown, or gray. The warmer colors are usually found down south of America.

The Coyote is a creature that is highly adaptable to different living situations, which is also the reason why they have been established so successfully in so many different climates. From desert plain to deciduous forests and even urban sprawls, coyotes can reside and survive.

The Coyotes also have a unique way of taking care of their young. When it comes to their young, both male and female coyotes are involved in caretaking. The roles are usually divided in that males fetch food and bring it to the females who are tasked to guard the babies.

In terms of appearance, German Shepherds are medium to large sized working dogs that are known for their loyalty and devotedness to their owners. They are also perfect for house tasks and guard duties because of this obedience that is hardwired into their systems. In fact, historical narratives will tell you that they have been employed as service dogs, police dogs, military dogs, etc.

The German Shepherds are also among the top ten breeds of dogs in the United States of America and one of the world’s most recognized dog breeds. These dogs are very active and require their owners to keep them busy. They like to be busy learning new things, engaging in activities, protecting their owners, and performing other tasks.

If you spend too much time away from home, then these dogs are not for you. If this is the case, chances are they develop negative behaviors such as chewing, barking, and digging holes. German Shepherds require their owners for them to engage in activities such as walking them in parks where they can see other dogs because they need to be socialized at an early age so that they can mix up with other dogs.

They are also fantastic watchdogs and are wary of strangers. If trained at an early age, German Shepherds are great with children and other pets as well. They make excellent family dogs.

What are the unique characteristics of the German Shepherd Coyote Mix?

There may be a disparity between the German Shepherd and the Coyote when we are talking about exercise, but it is indeed common that both these breeds exercise a lot! German Shepherds need at least two hours of exercise every day, while coyotes travel about 14 miles (24 kilometers) every day. If you put these two animals together, and you have yourself a highly active pet.

It is therefore important that before you consider getting a coyote shepherd, you have committed to regularly taking your dog to exercise. You can count on putting in hours of work to exercise your coydog seven days a week. From this, it seems that you will not be having any days off for the next decade if you ever do purchase a German Shepherd Coyote Mix

Even though coyotes are wild animals, they are highly affectionate. German Shepherds aren’t overly cuddly dogs, but they do love your company. A coydog is usually very fond of affection and will want to be near you all the time.

If you let a coydog, they would happily sit on the couch or sleep in your bed. While your coydog might seem to ignore you and want to roam around outdoors, they will be very affectionate at home.

With both parents having similar fur, coyote shepherds are a thick-furred pet that can withstand very low temperatures. They are a good choice for someone who lives in the northern US and wants their dog to be comfortable in the winter.

These dogs do shed a lot, though, so you may want to invest in a new vacuum before you bring your fur baby home.

As far as color goes, the coyote shepherd can have almost any variation in color or markings. There’s usually some sort of gradient between brown and black, but there can also be white, tan, or grey dogs.

Some of these dogs could have a lighter colored chest or a mask around the face as a result of this peculiar mix of genes.

The Temperament of the German Shepherd Coyote Mix

The Coyote and the German Shepherd are both even-tempered animals, so your coydog will most probably be a calm dog, but this is not a guarantee. If there ever is a chance that your dog is not the calm dog you expected it to be, you can still change this by frequent exercise. A guide by The German Shepherder is found here.

These dogs are also very observant. They will stand on alert, constantly watching for prey and potential dangers.

Coyote shepherds will be quick to react if something good or bad happens, so sudden movements around these dogs should be kept to a minimum in case they get spooked or snap.

Early socialization is imperative for all dogs, but for a German Shepherd coyote mix, it’s vital.

Since these dogs are half of a wild animal, they will have unpredictable tendencies. You will need to take your coydog puppy everywhere with you to get them used to all sorts of people and places.

Keep your puppy on a leash, but encourage them to explore and meet strangers. It’s a good idea to carry treats with you at all times, so you can pull your pet’s attention back to you whenever necessary.

You can try Zuke’s Mini Naturals Training and New Hemp Calming Dog Treats. They are made with real chicken and whole food berries, so they are quite nutritious. But we must say that we also love the size – they are tiny, and only 3 calories each, so you won’t need to be concerned about over-feeding.

At home, your coydog will be very cuddly. They love to nest and would appreciate a warm bed with a blanket. Your coyote shepherd will enjoy getting pets from you, though they may be a bit standoffish with strangers.

They should get along well with other dogs, as long as you have socialized them sufficiently as a puppy. Your coydog may lick other dogs’ faces in greeting, which is a coyote trait.

Other canines might not enjoy this, though, so keep an eye out when meeting new dogs.

This blog post talked about the result when a German Shepherd dog and a Coyote are mixed. Relevant topics such as the appearance, personality, and some tips about taking care of this dog were also detailed in this article.

Can a German Shepherd breed with a coyote?

Yes! The German Shepherd can be bred with a coyote. But, it should be noted that the population for such a breed is rare, so purchasing for such a dog may be pricey given the demand.

Not really. Coydogs may not be a good choice of pets for most people. Most people do not have the knowledge regarding natural canine instinct and may not also be strong-minded enough to take good care of these animals, especially considering their heavy activity requirements.

Not only are Coydogs aggressive but they are also territorial, and have wild instincts that often lead them to have wanderlust. This makes them dangerous for the dogs in urban centers.

Coydogs make sounds that are a fusion of a howl and a high pitched bark. They often howl at the moon at night.