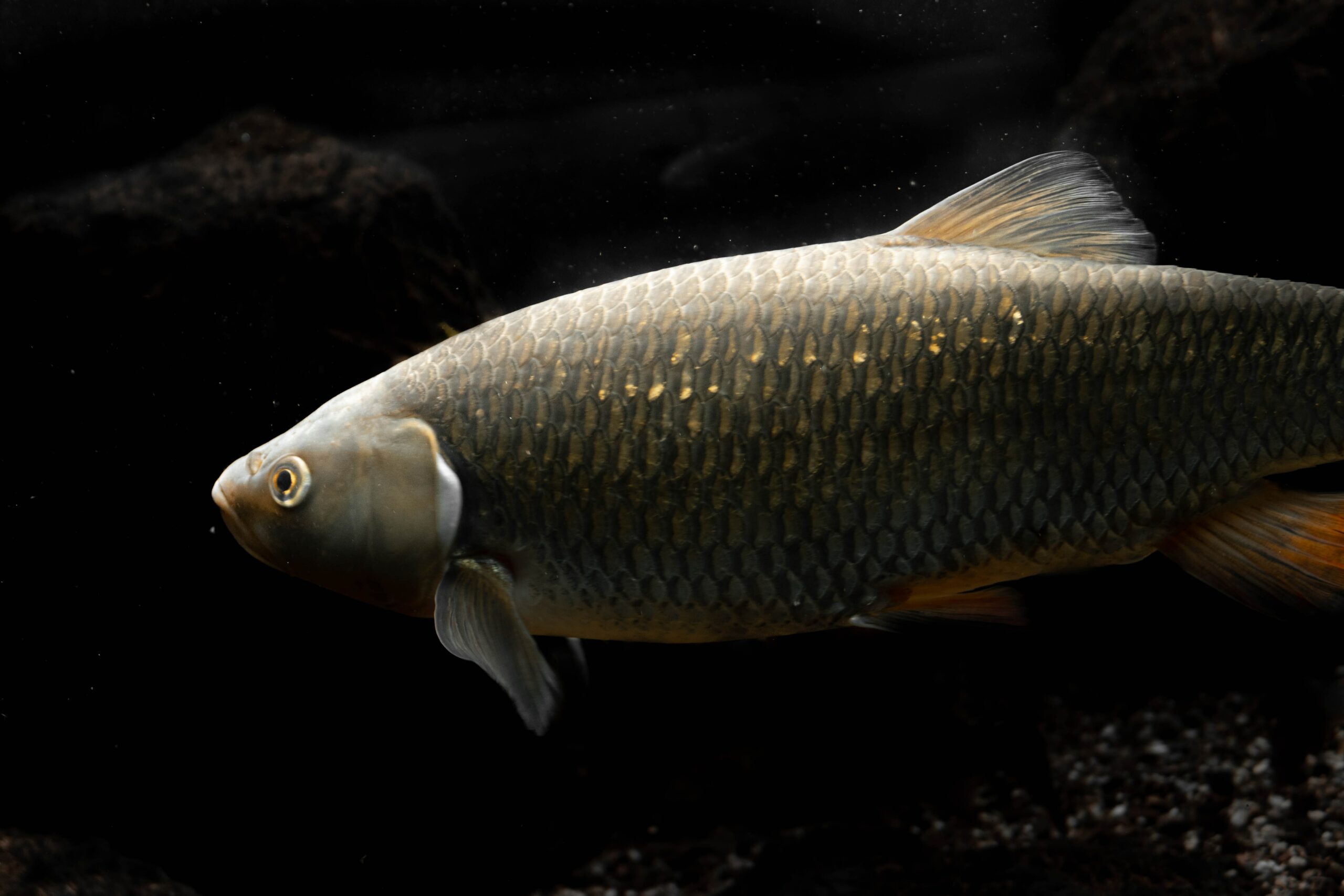 In this article, we will find out whether fishes sleep and how they do it. We will learn if fishes keep swimming while asleep, how many hours they need to rest and how to identify a sleeping fish!

All animals, including fishes, need to sleep or, at least, enter a state of rest where the experiences lived during wakefulness are consolidated and where their body rests. Not all animals sleep in the same way or need to sleep the same number of hours.

For example, prey animals, such as hoofed animals, sleep for very short periods and can even sleep standing up. Predators, however, can sleep for several hours, they are not always in a very deep phase but they are in a state of dozing, a clear example is a cat.

Animals that live in water, like fish, also need to enter that dream state, but how do fish sleep? Since if a fish were to sleep as any land mammal does, it could be swept away by currents and end up being eaten.

Some years ago it was shown that the passage between sleep and wakefulness, that is, between a sleeping state and an awake state, is mediated by neurons located in a region of the brain called the hypothalamus. These neurons release a substance called hypocretin and its deficit produces narcolepsy.

Later research showed that fish also possess this neural nucleus, therefore, we can say that fish sleep or, at least, have the tools to do so.

How do fishes sleep?

In the first instance, it is difficult to determine if a fish is sleeping. In mammals and birds, techniques such as the electroencephalogram are used, but this is linked to the cortex of the brain, a structure that fish lack, and using an encephalogram in an aquatic environment is not feasible.

To recognize the sleep in fish we must pay attention to certain behaviours, such as:

Prolonged inactivity. When a fish remains immobile for a long time, at the bottom of a reef, for example, it is because it is sleeping.

Use of the shelter. The fish, when they rest, look for a refuge or hidden place to take shelter while they sleep. For example, a small cave, a rock, or algae.

Decreased sensitivity. When sleeping, fish decrease their sensitivity to stimuli, so they will not be reactive to events around them unless they are very noticeable.

In many cases, fish lower their metabolic rate, lowering their heart and respiratory rates while sleeping. Therefore, even if we do not see a fish sleeping as we can observe it in any of our pets, it does not mean that a fish does not sleep.

When do fish sleep?

Another question that could arise when we try to understand how they sleep is when do fish sleep. Fish, like many other living things, can be nocturnal, diurnal or twilight animals and, depending on their nature, they will sleep at one point or another.

For example, the Mozambique tilapia (Oreochromis mossambicus) sleep through the night, sinking to the bottom, slowing their respiratory rate and immobilizing their eyes.

On the contrary, the brown bullhead fish (Ictalurus nebulosus), are nocturnal animals and spend the day in a shelter with all their fins lax, that is, relaxed. They do not respond to sound or contact stimuli and have a very slow pulse and breathing.

The tench (Tinea tinea) is another nocturnal fish. This animal sleeps during the day, lying on the bottom for periods of 20 minutes. In general, fish do not sleep for long periods, the cases that have been studied are always a few minutes.

Do fish sleep with their eyes open?

A widespread popular belief is that fish do not sleep because they do not close their eyes. This is wrong. Fish simply can never close their eyes as they lack eyelids. For this reason, fish always sleep with their eyes open.

However, some types of sharks have what is known as a nictitating membrane or third eyelid, which serves to protect the eyes, although they do not close them to sleep either.

Unlike other fish, sharks cannot stop swimming because due to the type of respiration they perform, they need to be in constant motion so that the water passes through the gills and thus be able to breathe. Therefore, while they sleep, sharks remain in motion, although this is very slow. Their heart and respiratory rates decrease, as do their reflexes, but, being predatory animals, they don’t have to worry.

Are fish still swimming while asleep?

It is difficult to identify when a fish that lives in an aquarium sleeps since we always see them in constant movement. The truth is that when most fish rest, they also have to move to maintain a constant flow of water through their gills to carry oxygen to their bodies.

Many fish have a so-called swim bladder, which allows them to float without muscular effort. These fishes can rest without worry. However, other fish like sharks do not have the swim bladder and need to be continuously moving in order to survive.

There are other fish that, during their sleep or rest, make noises (known as snoring) to scare off their predators. And other fish anchor their fin to the seabed to avoid being swept away by any current.

We also find in nature the curious case of the parrotfish that secretes a mucous substance with which it covers and hides its smell from the possible attack of predators.

How many hours do fish sleep?

Do not forget that, as a general rule, fish sleep is not what we commonly know by sleeping. It is a resting phase, so we cannot give an exact figure for the number of “hours of sleep” a fish has.

Besides, there is a great diversity of species and marine habitats, so it is very difficult to stipulate how many hours a fish can sleep on average. Above all, taking into account that many of them can sleep while still swimming.

What is clear is that, as with humans, the better the conditions of their environment, the more hours they can dedicate to sleep and the easier they will reach that state of rest caused by the cessation of their physical activity.

Either one way or another, fish need to rest to maintain adequate activity levels for their development, so we can say that fish do sleep. Not on a comfortable pillow, but they sleep.

When do aquarium fish sleep?

That will depend on each species of fish. But you can learn to detect when your fish are asleep. You will see that they are very still, that they do not do any type of action, they do not move their tail or fins, but still, it seems that they are observing everything with their eyes open.

There are fish that prefer to sleep during the day and others that do it at night. The fact is that they do it at times when they seek tranquillity and need to regain strength after spending the day swimming. But by their nature, they are half awake and half asleep, because they need to react quickly in case something happens around them.

Therefore, if you see that your fish are a bit strange, that they have an asocial behaviour and do not swim much, do not worry. They may be resting. It is a sign that they are satisfied with the care you are giving them.

Try not to disturb them by hitting the aquarium glass or touching the water. When they have replenished their energy, they will swim happily again with normality.

In this article, we found out whether fishes sleep and how they do it. We learned if fishes keep swimming while asleep, how many hours they need to rest and how to identify when your fishes are sleeping.

Like all animals, fish do need time to rest. However, due to their nature, they are half awake and half asleep because they need to react quickly in case something happens around them. Some fishes keep swimming while asleep, that is again a survival instinct.

If you have any questions on the content, please do let us know!

FAQ on Do fishes sleep?

How can you tell if a fish is asleep?

You can tell if a fish is asleep if it remains immobile for a long time, at the bottom of the aquarium, for example. Also, your fish may seem to be breathing slowly and it is not so sensitive to the external stimuli.

Do fish swim while they are sleeping?

Yes, most fish swim while they are sleeping. When fish rest, they also have to move to maintain a constant flow of water through their gills to carry oxygen to their bodies.

Do fish sink when they sleep?

Some fish sink when they are asleep, to the bottom of the aquarium or the reef. But most fishes still make some type of movement while asleep so that they can breathe or protect from predators.

What fish can sleep all night?

Some fish can sleep all night and they are known as the Parrotfish. However, it is very difficult to stipulate how many hours fish can sleep on average. Above all, taking into account that many of them can sleep while still swimming.

Can a fish drown?

No, fish cannot drown. If we look at a fish in the aquarium we will notice that it opens and closes its mouth several times a minute, during which time the two lids also move. These are the respiratory movements specific to fish, through which water enters the mouth, from where it enters the gill chambers, which shelter the gills and comes out from under the lids.

Fishkeeping World – How Do Fish Sleep: Everything You Need To Know