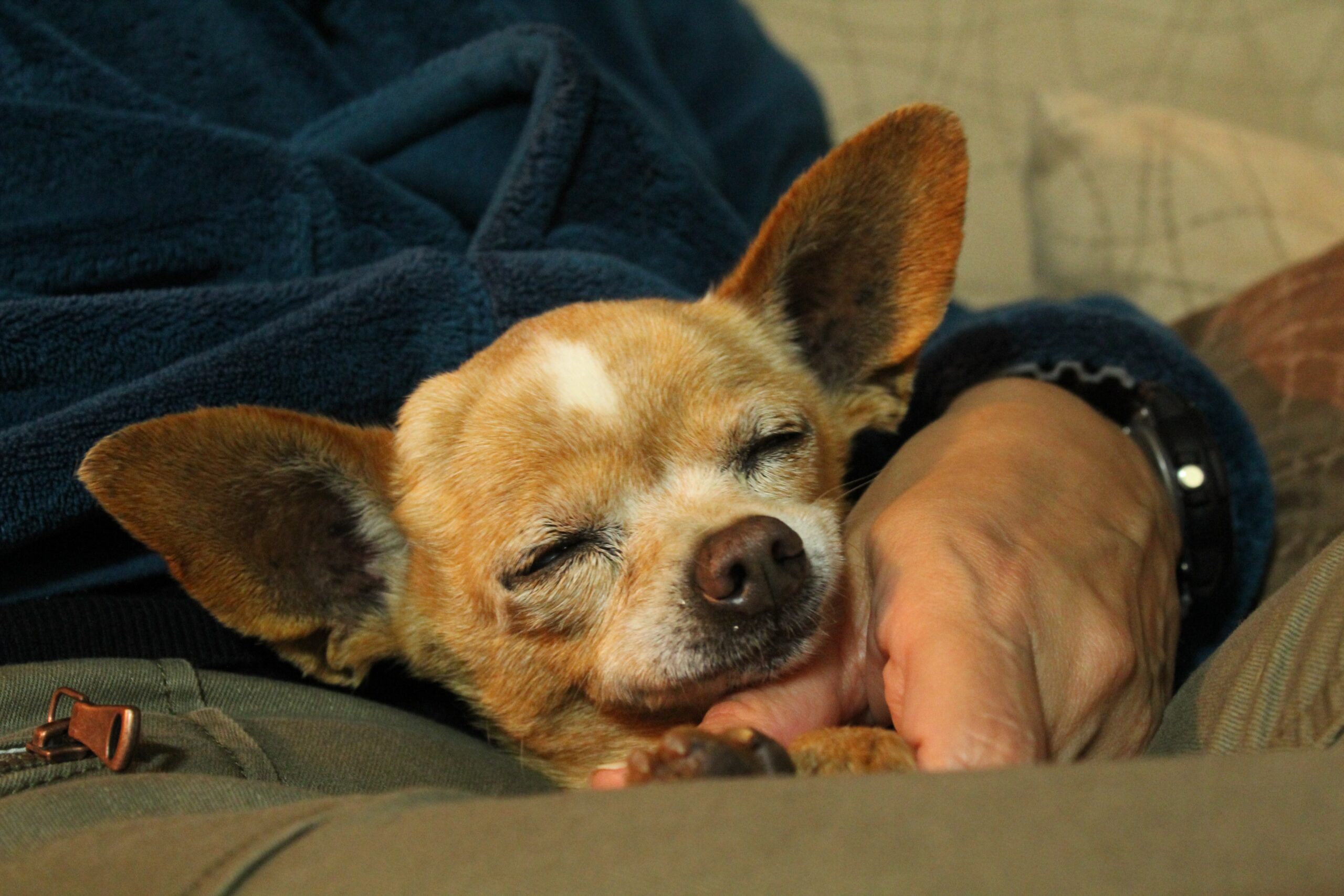 In this article, we will answer the following question: Why my Chihuahua doesn’t bark? We will discuss the possible reasons and what to do about each one of them. We will also explain what a Chihuahua bark means and how to control an over-excited Chihuahua.

You have a right to be concerned if your Chihuahua doesn’t bark, and below we will discuss the reasons why your dog is not barking when it is supposed to.

It goes without saying that the barking of dogs is like the voice for human beings. That is to say, barking dogs can communicate with each other and, why not, even with their human family. Through the barking, the dogs show boredom, announce the presence of some stranger, express a certain feeling, and, in addition, it is a way of attracting attention.

There are several reasons why a dog doesn’t bark well or very rarely, which we will describe below:

Medical issues:  Many choose to go to the vet to decipher the reasons behind why their dog is not barking, and this a good decision. Going to the vet is vital to determine why your Chihuahua doesn’t bark. Among the most common causes are constant vomiting, problems that significantly affect the respiratory system or an injury to the trachea or larynx. Only the expert will determine what the reasons may be.

You have a very calm dog: There are dogs that are too quiet to bark in response to any stimulus. There are others, for example, that communicates little through these sounds but do so with species of howls and whines.

Question of personality: There are experts who have come to a state that, like a person, dogs have different personalities and some are calmer than others, so they simply do not like or do not need to bark as much as others of the same species.

The “Honeymoon” phase: It can happen very frequently when you adopt a puppy. As long as the adaptation process lasts, the puppy will be very still; this stage is considered the Honeymoon effect.

When detecting any abnormality in the bark, behavior, or appearance of your dog, do not hesitate to go immediately to a veterinary clinic. There are various pathologies that can cause both aphonia and excessive barking in dogs.

When your dog tries to bark and is unable to make sounds, or if he does not bark well, these may be symptoms that his vocal cords are affected. As these structures are found in the throat, very close to the larynx and just above the trachea, any injury, trauma, inflammation, or infection in these regions can affect the ability to bark or make your vocal emission more hoarse.

If your dog has a condition that causes chronic or excessive vomiting, it is very likely that his larynx and throat are constantly irritated, preventing him from barking properly. In addition, diseases that affect the respiratory tract can also cause hoarseness in our best friends.

On the other hand, if your dog barks excessively, it can be a symptom of stress, boredom, sedentary lifestyle, or other pathologies. In all the cases mentioned, it is equally essential to consult your trusted veterinarian.

Does your Chihuahua walk with a collar?

Does your dog pull a lot on the leash and wear a collar for walks? Well, this constant impact can injure or irritate your larynx, throat, or vocal cords, causing the dog not to bark.

If your furry dog also seems to be choking, panting very heavily, has a cough, retches, or difficulty breathing while walking, playing, or exercising, do not hesitate to quickly take him to the vet.

To avoid these disorders, we should prefer to use a harness on daily walks with our furry dogs, and also teach them not to pull on the leash and walk correctly. Remember that the hanging collar is counterproductive and dangerous, and that positive reinforcement is the best way to encourage and train our best friends without putting their well-being at risk.

Have you just adopted a dog and it never barks?

Adopting a dog is an act of love that gives thousands of animals a second chance to have a home and receive the love they so much deserve. However, it is important to quickly take our new companion to the vet to rule out any pathology and find out his health. It’s also important to see your vet see if your new partner has undergone surgery to remove his vocal cords.

If you recently adopted a puppy, your little one may not immediately bark when they arrive at their new home. Your companion needs to adapt to the new stimuli in his environment to feel safe and to be able to express his personality and feelings with confidence.

Also, if you adopted an adult dog, a sad possibility is that your new friend will not bark at being the victim of physical or emotional abuse. In these cases, we will need to have patience and professional help to get our new best friend to regain his self-confidence and to be able to express himself freely, without fear.

Other reasons why a Chihuahua doesn’t bark

If your recently rescued dog has difficulty barking and you do not know his history, there may be chances that his previous owner has performed an operation to remove the vocal cords of the dog, many of these cases can still vocalize but in very tones of voice. low.

Alternatively, if the dog just doesn’t seem interested in barking, it could mean that it’s just its nature or that its previous owner may have used anti-bark collars or worse, that the dog has been abused every time she barked. With time and gentle training techniques, you can help your Chihuahua find Its voice again.

Why do chihuahua dogs bark?

One of the most widespread comments in the pet world is that Chihuahuas bark a lot. So let’s see why it can be:

By stress: with the barking, they release the possible accumulated stress.

Because they like to listen to themselves: our Chihuahuas are special even for this.

To get noticed: It is not very strange to see a Chihuahua bark at a dog that is bigger than him. Usually, it is an alert state that more or less means “hey watch out, I’m small but a bully.”

Out of boredom: Yes, Chihuahuas bark out of boredom. It usually happens to dogs that are for a long time without the company of us or other dogs.

By inheritance: There is also a genetic character in the barking of the Chihuahua which is quite difficult to train, but in some cases, it has been alleviated with the behavior of the owners.

Due to health problems: It is very common that as they get older they lose their faculties and one way of expressing it is by barking. That is why it is very important to go to the vet with any symptoms.

What does the barking of a Chihuahua mean?

Not all dog barks mean the same thing, you have to take into account a couple of factors such as facial and body to define well what each bark means.

Short and high bark: It means surprise or joy.

Short, high-pitched bark with low tone: He is upset.

Mid-tone choppy bark: He wants to play with us.

One or two short barks: He is greeting us.

Long bark with an interval between them: It means that he feels lonely.

Continuous and fast barking: It is warning us of the entrance of someone strange.

What to do to stop my Chihuahua from barking?

If we notice that our Chihuahua barks a lot, the first thing we have to ask ourselves is if we walk it long enough, since being such active animals, they may need a little more physical activity to release accumulated stress.

In the event that the problem persists, we must adopt the role of “alpha” of the pack, this makes it much easier to train a puppy and possible barking is reduced.

One thing that we are very clear about is that we do not defend hitting animals as a form of training, but we will scold our pets if they do something wrong. In addition, perseverance is very important since it is useless if our puppy does something wrong and we scold him and not the next time, we must be upright in this regard.

In addition to the barking of the Chihuahuas, you may also be interested in how to care for a Chihuahua.

In some very rare cases, however, Chihuahuas can’t bark. If this reminds you of your pet, our final recommendation is to take your pet to a vet, just to exclude any medical issues.

FAQ on Why my Chihuahua doesn’t bark?

Should I be worried if my dog doesn’t bark?

You have a right to be worried if your dog doesn’t bark. It may mean that it is sad, or it may be a sign of a medical issue. Pay attention to other symptoms that your dog is showing (eg. is not eating, not active, etc.) and visit a vet just to rule out any serious issue.