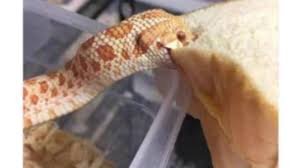 In this article, we are going to answer the following questions: Can snakes eat bread? Can snakes be omnivorous? What do snakes eat and how often should you feed your snake? Finally, we give you 10 basic tips for feeding your snake.

Snakes do not eat bread, and since they are carnivores bread is never on their menu. Snakes feed almost entirely on live food, warm-blooded or cold-blooded. But some species are suitable for dead food but dry and heated as much as possible before administration.

Any animal small enough to be swallowed is accepted as food if it is known and has been previously consumed by the snake, otherwise, it can be refused or accepted after many attempts.

The purchase of snake food can be done from specialized stores or from breeders of species that are suitable for their food. Thus, mice, rats, guinea pigs, hamsters, plums, chickens, fish, frogs, frames, etc. can be purchased for your pet snake.

Can snakes be omnivorous?

By definition, no snake is herbivorous or omnivorous. Unlike other reptiles, such as turtles and iguanas, all snakes are “mandatory carnivores.” This means that they must consume animal matter to survive. Although there are thousands of different species of snakes, they all have this trait in common.

However, it is rare for a snake to feed exclusively on mammals. Wild snakes often have diverse diets and eat a wide variety of animals.

These may include the following:

Snakes are mandatory carnivores, which means they eat rodents. Some, like green snakes, are insectivorous. Water snakes and garter snakes prefer to eat fish. Egg-eating snakes are close to a vegetarian snake. They are a good pet choice if you want to avoid feeding the gnawing snakes altogether.

What do snakes eat?

Food preferences are not the same for all snakes, they vary from one species to another but also depending on age. Thus, some species prefer mice and rats, while others feed on fish or lizards. The hazelnut snake, for example, eats lizards and young snakes in both stages of age, while house and water snakes feed on newts, frogs and fish.

Food choice is an essential factor for growth in captivity and must be well known and monitored. In the case of administration of live rodents, we must be careful and monitor the behaviour of snakes. If the snake has not immediately shown interest in the mouse or rat introduced into the terrarium and does not kill it immediately, it is advisable to take it out so as not to possibly injure the snake.

An exclusive feeding with white mice is less recommended, because it leads to the weakening of snakes and even a disease of them, given the biological value of laboratory mice, much lower compared to that of mice in the wild.

The appetite of snakes is higher at temperatures between 23-28 ° C, an aspect that we must keep in mind when we intend to feed it. For feeding snakes we will choose lively, active animals, to arouse their attention and desire to feed as soon as possible.

Often snakes, in the conditions of a sudden change of their living environment and different conditions from it, will refuse food for a shorter or longer period, after which, gradually, they will get used to the new conditions and will agree to consume a little, in a slightly longer interval until they will be able to feed.

Therefore, it is good to know exactly what he eats in freedom and under what conditions he lives so that the accommodation period is as short as possible. The success of raising snakes in captivity depends largely on our ability to stimulate and cause them to feed regularly and even multiply.

In some situations, newly purchased or captured specimens systematically refuse food, a refusal that can last for days, months and even years. It is recommended not to keep more individuals in a small terrarium, because stress is life-threatening and, in general, they or some of them refuse food.

To avoid or shorten the period of “hunger strike”, it is necessary to know and respect some very punctual rules, in direct correspondence with the pretensions of the species.

When purchasing a snake, we will make sure that it is not sick, to watch how it feeds on the old owner and not to show wounds on the surface of the body. So we will ask the owner to give us a demonstration of snake feeding. In the case of a poorly arranged terrarium, it can become a stress factor that can trigger the refusal of food or even the appearance of diseases due to the weakening of the body.

After purchase, in the first two weeks, the snake will be disturbed as little as possible and only when it will be given food, and if it is not interested in it, it will be removed and reintroduced after 2-3 days. In species that allow dead food, it must be carefully prepared to be eaten by snakes.

How often should you feed your snake

Feeding is one of the most important processes of snakes in captivity. Their survival practically depends on it. And although there are several methods of force-feeding, they should eat by themselves.

Here are some practical tips based on several analyzed documents. I know that for snake owners, feeding them can be the scariest moment or the most exciting, all I am saying is that it should be taken with respect towards the prey and with responsibility for your snakes.

On the other hand, some varieties eat chickens, Australian parakeets, finches, rabbits, etc. Here we will draw on the most common that are Arabian mice and laboratory rats.

That is, the hours of light and those of darkness have to be perfectly distinguished in your terrarium; This is achieved by putting your terrarium next to a window or with a broad-spectrum spotlight on for 10 to 12 hours.

There are some species such as the Morelia Viridis or the emerald boas that due to their complexity in handling, it will be preferable to feed them in their terrariums; however, if you can do it elsewhere it will always be better.

One more warning, do not overheat the mouse because it can explode when the snake constricts it. If for any reason the snake after several attempts did not eat the thawed mouse, discard it. Do not try for any reason to freeze it again.

Of course, these tips do not have the absolute truth and some questions may not apply to specific specimens.

In this article, we answered the following questions: Can snakes eat bread? Can snakes be omnivorous? What do snakes eat and how often should you feed your snake? Also, we gave you 10 basic tips for feeding your snake.

We think it is important to remind you that snakes do not eat bread. Why would they? Snakes are mandatory carnivores, which means that they need meat in order to survive. Some snakes feed on mice, rats and small birds, while others prefer fish, insects or eggs.

Make sure you know what is your snake’s food preference and that you feed it correctly. Your snake’s survival literally depends on it!

FAQ on Can snakes eat bread?

Is bread good for snakes?

No, bread cannot be good for snakes, as they are carnivorous. Snakes need meat in order to survive and bread or other pastries is not on their diet.