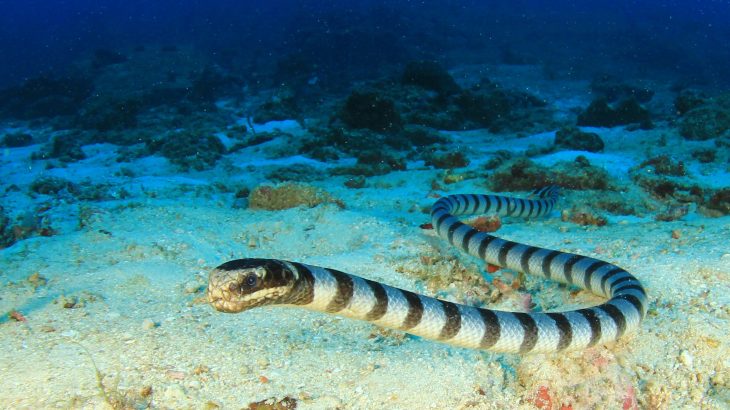 Yes, snakes can bite underwater. Some snakes are perfectly adapted to living in oceans, streams, rivers, and lakes. But even the ones that aren’t, many – like the rattlesnake – can swim and bite underwater anyway.

The first part of this guide begins with observing snakes adapted to aquatic environments, including sea snakes and water snakes.

What are sea snakes?

Sea snakes are a subfamily of the Elapid family of snakes. Coral snakes are an example of this family that lives in the United States, although they are not true sea snakes in the same subfamily.

Snakes, like the black-banded sea krait, spend most of their lives in water. Most of them cannot even move on land. They have adapted to life in the ocean:

These ventral scales are necessary for snakes to move on the ground. The fact that most species of sea snakes have gotten rid of them – so that their bodies can be narrower and sleeker, better at moving in water – means they can’t move on land.

There are 69 known species of sea snakes, making them the most diverse subfamily/group of reptiles in the ocean. The longest sea snakes are three meters long.

Sea snakes aren’t the only ones who enjoy an aquatic environment. There are quite a few other species that live mainly in the water, if not in the sea, that is, in rivers and lakes.

The Nerodia genus of colubrids is also called ‘water snakes and contains nine species. All of these nine species live in North America in slow-moving streams, ponds, or lakes. These species are non-poisonous snakes that bite in the water.

Additionally, all snakes can swim, with many more spending much of their time in or near water. Another example is the water moccasin or cottonmouth snake. These snakes are semiaquatic and eat fish.

They are also exceptionally poisonous, and they can easily kill someone if they cannot find an antivenom. Their bites also cause pain, tissue death, and may require amputation.

Can snakes bite underwater? Sea snakes have to be able to bite underwater, or they won’t be able to eat. Fortunately, because humans are so big compared to them, they are more afraid of us than we are of them. They will typically try to get away from you rather than confront you.

Of course, this is rare. Other types of water snakes that bite are cottonmouth snakes (water moccasins), garter snakes, and coral snakes.

How long can a snake stay underwater?

Sea snakes have become adept at staying underwater, which makes sense as they spend their lives in the sea. But sea snakes don’t have gills. This means that they are not completely aquatic like fish or eels. They have to surface regularly to breathe.

However, a sea snake can stay underwater for an hour without breathing. This allows them to hunt or hide for long periods of time.

Water snakes and other snakes that can swim cannot last that long without breathing. Even corn snakes can stay underwater for up to fifteen minutes when soaking or bathing.

Do snakes drown if they bite underwater?

Since they don’t have gills, sea snakes and other water snakes have to surface regularly, or they could drown. However, they will not drown just because they bite underwater.

Think about the last time you went swimming. You can open your mouth without choking immediately. That’s because your body knows that it shouldn’t open the windpipe. And if your mouth fills with water, all you have to do is exhale a little, and it will clear.

The only exception could be if they bite but do not release. Many snakes do this to inject more venom into the wound they have created.

This is how they can attack animals much larger than themselves. They will bite you and stick to you, for minutes at a time.

However, a snake is unlikely to do this to you when you are underwater. They are much more likely to bite once and then swim away. Either that or avoid you altogether.

Sea snakes are among the most poisonous in the world. Not only that, but many species of sea snakes are exceptionally aggressive.

They may try to attack you without provocation, thinking that you are a threat or a predator. Fortunately, sea snakes don’t always poison their victims.

This means that although they may bite you, they only rarely inject you with their venom. What is scary is that their bites are generally painless. You may not even be aware that you have been bitten.

After half an hour, you may notice a headache, thirst, and sweating. You can also vomit. For the next several hours, you may also feel pain and stiffness.

Your jaw especially can become stiff and locked (lockjaw). If a medical expert does not see you, you will eventually have difficulty swallowing and breathing, which is why these snakebites can be fatal.

Can a moccasin bite underwater kill a human? You can bet so, and so are the coral snakes. Fortunately, none of these snakes will go out of their way to attack you. They will most likely leave you alone. That’s why there has only been one coral snake death in the last 40 years.

Where can sea snakes be found?

Sea snakes are found all over the world. True sea snakes are from the Pacific Ocean, where it is a little warmer than the Atlantic. So you won’t find them on the east coast or the west.

The only place you’ll find them in the US is Hawaii. There you can find only one species, the yellow-bellied snake. However, if you wanted to find water snakes, they are all over the US.

Cottonmouth snakes, which you really shouldn’t be looking for, are mostly in the Southwest and range from Texas to Virginia.

If you wanted to go out in search of real sea snakes, you would have to go to the other side of the world. They live in the Pacific. They can also be found in the Indian Ocean, from the east coast of Africa to India and through Indonesia.

They are also common in the waters around Japan, as far south as Australia, and further east in the Pacific island chains.

How to recognize poisonous aquatic snakes

Generally, there are two main poisonous water snakes to watch out for. These are cottonmouth snakes (water moccasins) and coral snakes.

There are several species of the coral snake, but they share the same identifying marks. They are red, yellow/white, and black. Many non-venomous snakes share similar but different markings. However, it is easy to tell the difference if you know how to do it.

How to identify a coral snake

The markings of a coral snake are banded along its body. You can tell if you are looking at a coral snake because the black bands will be next to the yellow ones. The problem is that there is another snake, called the scarlet king snake, that shares the same markings. The only difference is that in the scarlet kingsnake, the red bands touch the black bands, not the yellow ones. These snakes are harmless.

How to identify a cottonmouth snake

You also have to be careful with cottonmouth snakes. These snakes don’t have quite ringed markings like coral snakes, but they can still be identified.

They are about three feet long and are large, bulky snakes. If you have experience with snakes, you will immediately notice that they are fatter than normal. Their tails are short and thick, too.

Colour-wise, they are basic brown or tan with dark bands. Its design and colour are a bit reminiscent of a boa constrictor since they have saddles along the entire back.

They are highly unlikely to approach you and will attempt to escape instead. They are often literally hung on branches and rocks over a water source such as a lake or slow-moving stream.

What to do if you see a snake underwater

If you ever come across a snake in the wild, there are simple rules you can follow:

Never panic. The vast majority of snakes found in all circumstances are not poisonous. And even if you come across a poisonous snake on your travels, they are unlikely to attack you. They are more afraid of you than you are of them. If you panic, waving your arms and making sudden movements, the snake will interpret this as a threat.

Let the snake escape. If you see a snake a few feet away or in the distance, stop to gauge the snake’s reaction. Nine times out of ten, they will try to escape, either by sliding into some bushes or going in the opposite direction. An underwater snake will swim away.

If you are in the wild, leave the snake alone. If you are somewhere where someone else is likely to encounter the snake, then call pest control or someone else who can help get rid of the snake.

If you are on a scuba dive, tell your instructor what you saw. These are common-sense tips. When you see a snake, think, and always play safe by wearing proper snake clothing and footwear.

FAQ on Can snakes bite underwater?

Do snakes drown if they bite underwater?

Sea snakes and other water snakes have to surface regularly, or they could drown. However, they will not drown just because they bite underwater, they can open their mouths without breathing. Otherwise, they would not be able to feed.

Do poisonous snakes swim on top of the water or under?

Poisonous snakes usually swim on top of the water, why non-venomous snakes can dive deep under the water.

Yes, Copperheads can bite underwater. Snakes do not drown while opening their mouths under the water. The only exception could be if they bite but do not release. Many snakes do this to inject more venom into the wound they have created. This is how they can attack animals much larger than themselves.

How long can a snake stay underwater?

A snake can stay underwater between 1 hour to 2 hours. Then they will come on the surface to breathe for about 45 seconds before diving into the water again.

Hopefully, we have answered all your questions, and now you know that although it is possible for snakes to bite underwater, if you don’t panic and bother it, the snake will most likely swim away.