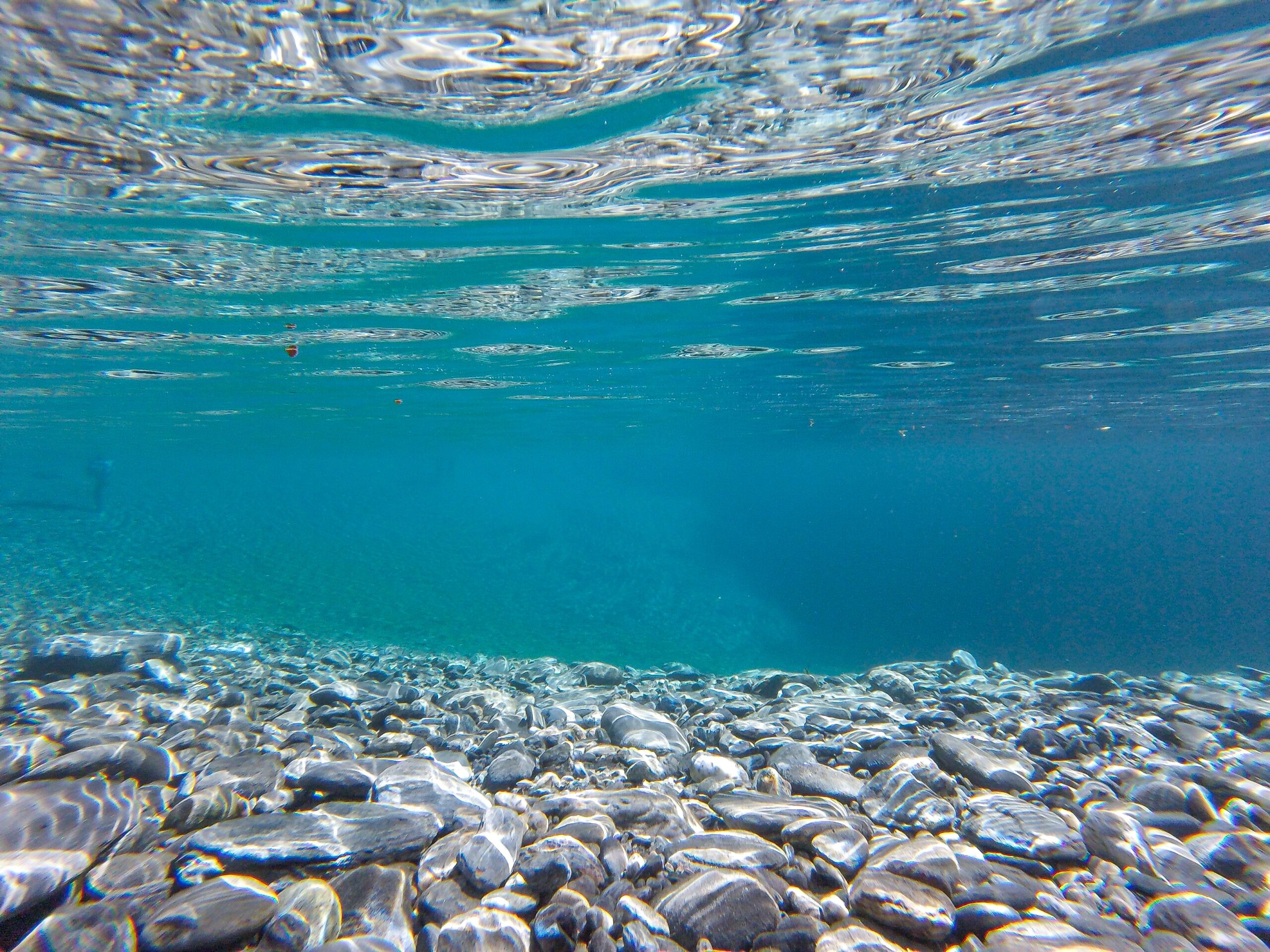 This topic will briefly cover the question “Can fish see underwater?” as well as the structure of a typical fish eye and how it adapts according to the different environments, along with other related questions such as “Can fish see colour?” or” How fish see in murky water?”

Yes, fish can see underwater. However, this topic has been subjected to various debates in the terms of colour vision, depth or whether the fish can actually see UV radiations etc.

Every animal has eyes that are built best, according to their environment. Just as humans eyes are adapted to see on land and in air, if someone jumps into the water without wearing goggles, he or she will not be able to see clearly.

Fish don’t need goggles, their eyes are somewhat like humans as they both have a cornea, an iris and a pupil having an additional protective film, unlike humans, to see clearly underwater.

How do fish see underwater?

Fishes are known to have a good close-up vision while a poor distant vision. That is the main reason why fishes tend to be near the feeding area.

Fish eyes are mostly like other vertebrates, light enters the cornea, pass through the pupil and finally reaches the lens. Fish has also cons and rods that help them see colours as well as in dark.

Fish have a film over their lens that help them see clearly underwater, it is an interesting fact to know that fish don’t blink, that’s right, they don’t unlike us.

Thus, it pretty much answers our main question, “Can fish see underwater?” as well.

How do fish eyes work?

A fish eye is quite similar to the human’s eyes but they are better adapted to see contrast and detail movements, due to the behaviour of the light underwater.

The fish eyes have cornea for its protection, and iris for the adjustment of the light levels, a lens for the formation of the image and a light-sensitive cell coating spot, retina.

A fish’s eye is able to receive the information in the form of light, from a very wide field of view due to their much spherical cornea. They are often able to see up to 360 degrees of field of vision.

The lenses are spherical which, despite their perfectly wide-angle vision, makes them focus the object basically in the centre.

Generally, most of the fish are short-sighted and can see the close-up objects perfectly. While on the long-range or distant field they are not able to focus.

This clearly supports our main question, Can fish see underwater?  Well, now you know they do.

Most of the fish are able to detect the UV light while human eyes are not capable of detecting UV light. Human has trichromatic eyes while fish can further see in the UV spectrum of light.

The human eye has comparatively less number of rods than the fish’s eyes. Most of the fish can activate night vision mode which helps them to survive underwater where light usually vanishes out.

As we have learned so far, the adaptability leads to evolution. Different species of fish have adapted differently, for example, the predatory fish are sharp and quick in detecting change and contrast in the moving prey.

Except for some species such as sharks and rays, the elasmobranchs, all other fish can’t move their iris. While humans are capable of adjusting the movement of their iris.

How do fish see in murky water?

Fish have adapted their vision according to their environment over time, that’s how the evolutionary process takes place. It is always important to know that ” structure and function are co-related”

Certain fishes have adapted to see under murky water. There is relatively very low light in murky water, so the fish use a special layer of guanine protein crystals known as lucidum tapetum and move their eyes around.

The layer called lucidum tapetum is located behind the fish’s retina. The light is reflected through the retina, enhancing and intensifying the light that reaches the rods and cones, the receptors of light in the eye.

How do fish see in dark water?

The rods help them to see in different intensities of light. Other structures like lucidum tapetum, a special layer of guanine protein crystals, also helps them see in dark water.

Moreover, when the water gets too dark, fish activate their hearing with the help of the lateral lines present in almost all the fish. Lateral lines are complex organs that help fish to monitor any vibrations or change of pressure in the water.

Just like humans, fish also have photo receptivity, they have a well-developed mechanism for the interpretation of visual information that is perceived by their cone and rod cells.

Cone cells are the cells that help fish to see and distinguish between different colours. Some species have few cone cells while some of them have the enormous number of cone cells, thus it is a specie variant trait.

Most fish are trichromatic but some may also be able to detect ultraviolet light. However, in low light colour matters less and all the work is done by the rod cells which detect contrast and distinguish between changing movements only.

So if we refer to our question again, Can fish see underwater colours? the answer to this question is quite short and simple “Yes! they surely do”

Most yet not all fish can detect UV light, thus it’s a specie variant trait. The fish that are able to detect UV lights have cones that absorb the wavelength of ranges that characterize UV light.

This phenomenon helped the manufacturers to produce lures having UV light finishes to it. This helps to attract the fish that can see UV light.

It is important to keep in mind that it is in vain to use lures more than 50 feet depth or so, as short-wavelength UV disappears as water depth increases.

Can fish see underwater far away?

It depends if the water is clear or murky, also depends whether its day or its night. This also depends upon different species of fish in which many factors like eyeball size, range and vision, fall.

Fish have the ability to move their eye lenses back and forth to adjust focus, unlike humans. Fish are generally excellent in close-up visions while poor in distant visions.

Typically, when fish try to see far away they move their lenses back, for visual perspicacity, while to see closely to push their lens forward, this process is known as accommodation.

As the water depth increases the colour is no longer there, as water has an ability to absorb different colours completely at various depths. So, fish only see shades moving in depth.

Moreover, when the water gets too dark, fish activate their hearing with the help of the lateral lines present in almost all the fish, as already discussed before.

So the answer that sums up the question, “Can fish see underwater in-depth?” with the answer, “Yes, they do but without colours as compared to the shallower underwater regions”

The water is a constant environment to fish that is why they don’t usually see, or smell water as far as it is free from any contamination.

Can fish swim during sleep?

Some of the fish, for example, the parrotfish, make a slimy mucous bubble around their body near reefs and use it as a sleep bubble, utilizing the bubble to sleep, while slowly moving their bodies to get the flow of water running through their gills

In our article we tried to briefly answer the main question, “Can fish see underwater?” as well as the structure of a typical fish’s eye and how it adapts according to different environments, such as a How fish see in murky or dark water.

We came to know that yes fish can see underwater.

We also learned that a human’s eye and a fish’s eyes are almost the same but fish don’t have eyelids and have an additional layer helping them to see clearly underwater.

How do you detect a fish underwater?

Yes, fish can see humans. A recent study shows that fish can actually see humans and remember their faces. Researchers are surprised to know that an archerfish is capable of recognizing different human faces.

Why do fish stare at me?

Fish stare at you because of their natural instinct to detect the change in movements. When you are near a fish tank, you see fish staring at you, they must think that you are going to feed them.

What colour do fish see?

Fish almost see all the colours. Fish also have rods and cones just like humans. The cones help the fish to see colours, while Rods help them to detect movement and shapes in the dark, some of them can even see the UV lights.

What is the part of the eye that fish doesn’t have?

The part of the eye that fish doesn’t have are eyelids. Along with other variations, having no eyelid is the most highlighted one. Fish don’t have eyelids they just have a thin layer protecting their eyes.

Yes, fish do watch TV. Fish do enjoy recreational activities such as dolphins, so we can say they watch TV, but for them, only the images and the changing colour movements matter as no evidence of any advanced cerebral activity performed by fish have been discovered yet.