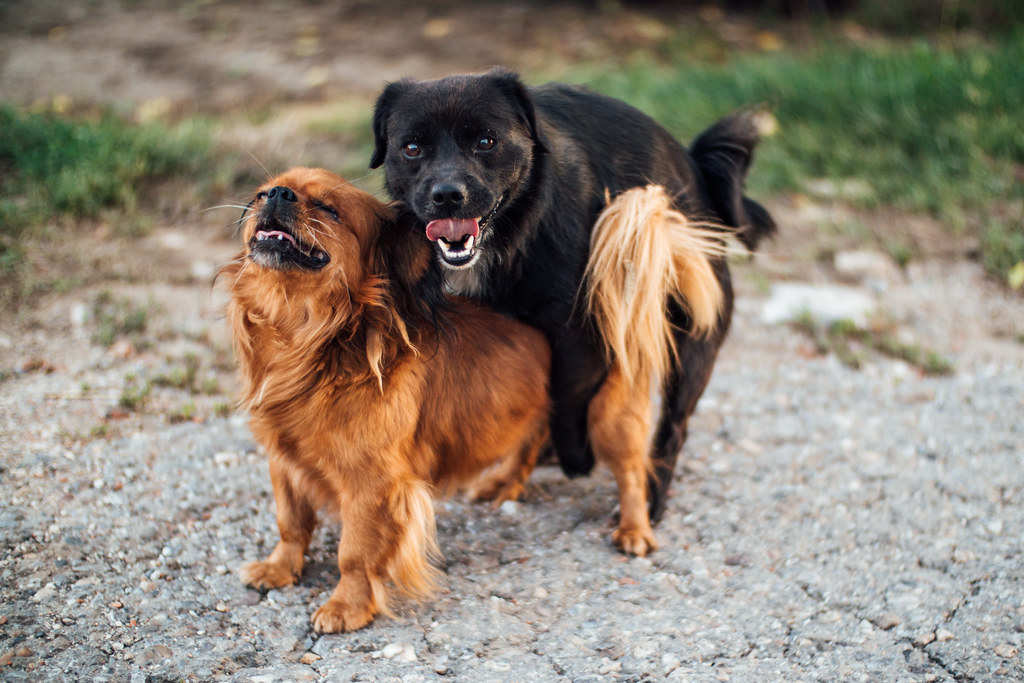 Can a dog get pregnant without being in heat?

Do not. Bitches only ovulate at a specific time in the estrous cycle, in estrus which is also known as the female’s dog heat. Below will be described each stage of the cycle because female dogs that are not in estrus will not get pregnant.

The estrous cycle in female dogs is divided into 4 phases:

In proestrus, the female canine body is preparing for ovulation and pregnancy. In this phase, hormones make the females have vulvar swelling, bleeding and become more attractive to males. However, at this stage the female still does not accept the male’s copulation.

It is the phase of the “dating” of the dogs, it involves games of attraction between the dogs. Female dogs can be more agitated during this period and even run away. It is important to beware of unwanted leaks.

Estrus, also known as heat, is the period in which the female accepts the male dog’s copulation. It is at this stage that ovulation of the female dog takes place. So only copulations in this period will make the female dogs get pregnant. Estrus can be shorter in some animals as well as longer in others, ranging from 7 to 21 days on average.

In female dogs, the vulva remains swollen, but the bleeding may stop. Care must be taken, as many owners think that the heat is over because the dog has stopped bleeding. But many times, she is just going through her most fertile period.

The diestrus is the phase in which the uterus prepares to receive the embryos, it lasts from 58 to 68 days. Female dogs reduce vulvar edema, and may present translucent secretion in the vulvar region. It is at this stage that many bacteria can develop in the uterus of female dogs resulting in pyometra. And when female dogs reproduce in estrus, diestrus becomes the fetal developmental stage of pregnancy.

Anestrus is the longest phase, lasting up to 4 months in some animals. In this phase, hormonal quiescence occurs in female dogs. Normally at this stage, female dogs do not accept the mount, much less the male’s copulation, and thus can be quite aggressive. The vulva returns to its normal size which makes copulation even more difficult.

When is the best time for a female dog to become pregnant?

Female dogs are monoestrous, typically non-seasonal, polytocous, spontaneous ovulators animals, meaning they only come into heat once or twice a year. The best time to inseminate or reproduce a female dog is at the time of estrus, or heat. At this stage the female dogs will have already ovulated, the eggs will already be matured, just waiting for the spermatozoa for fertilization to take place.

Healthy female dogs must be vaccinated before mating and a deworming protocol must be carried out to avoid contamination of puppies intrauterine or after birth.

Some animals should receive vitamin supplements before and in the first days of pregnancy to avoid malformation problems in dogs. Female dogs must be at the ideal weight for the species, it is not desirable for obese or very thin females to breed. The diet of the pregnant dog can also change, so that the animal does not lose so much weight at the end of pregnancy.

Some female dogs can become very aggressive with males when the correct time for breeding dogs is not respected. Many times, animals can end up injured.

Also, it is not advised to leave the male and female together during the entire time of estrus. Because dogs can spend hours trying to copulate, thus stressing each other. In addition to having the possibility of getting hurt from trying so hard to copulate.

Female dogs can only reproduce at a specific period of the estrous cycle, in estrus. Because it is in the estrus that the female dogs ovulate, and for there to be a pregnancy, the egg must be fertilized by a sperm. As in the other phases there is no ovulation, the animal can even copulate, but the female dog will not become pregnant. To avoid health problems in dogs, it is recommended that a veterinarian monitor the entire reproductive cycle of dogs from proestrus to parturition, thus preventing the spread of diseases and ensuring that the females and puppies are healthy.

Frequently Asked Questions (FAQs): Can a dog get pregnant without being in heat?

Is it possible to manipulate a female dog’s estrus with drugs, as in cows?

Yes, it is possible, but it is not so used because many female dogs also do not respond to hormonal protocols, so few animals go into heat. Therefore, it is recommended to let the animal come into heat naturally and the tutor will be accompanied until the exact moment of reproduction.

How long does pregnancy last in female dogs?

On average, the duration of pregnancy in female dogs is 63 days, ranging from 58 to 68 days from the day of mating. Veterinarians can dose hormones that will give a more accurate date for parturition. In addition, there are imaging tests that can indicate approximate parturition dates in female dogs.

Can female dogs have more than one heat per year?

Yes, some dog’s breeds can come into heat every 4 months. However, care should be taken as constant repetitions of heat can be a sign of endocrine diseases, so a veterinarian should be consulted to avoid health problems in dogs.

Pictures from Flickr.com and pixabay.com