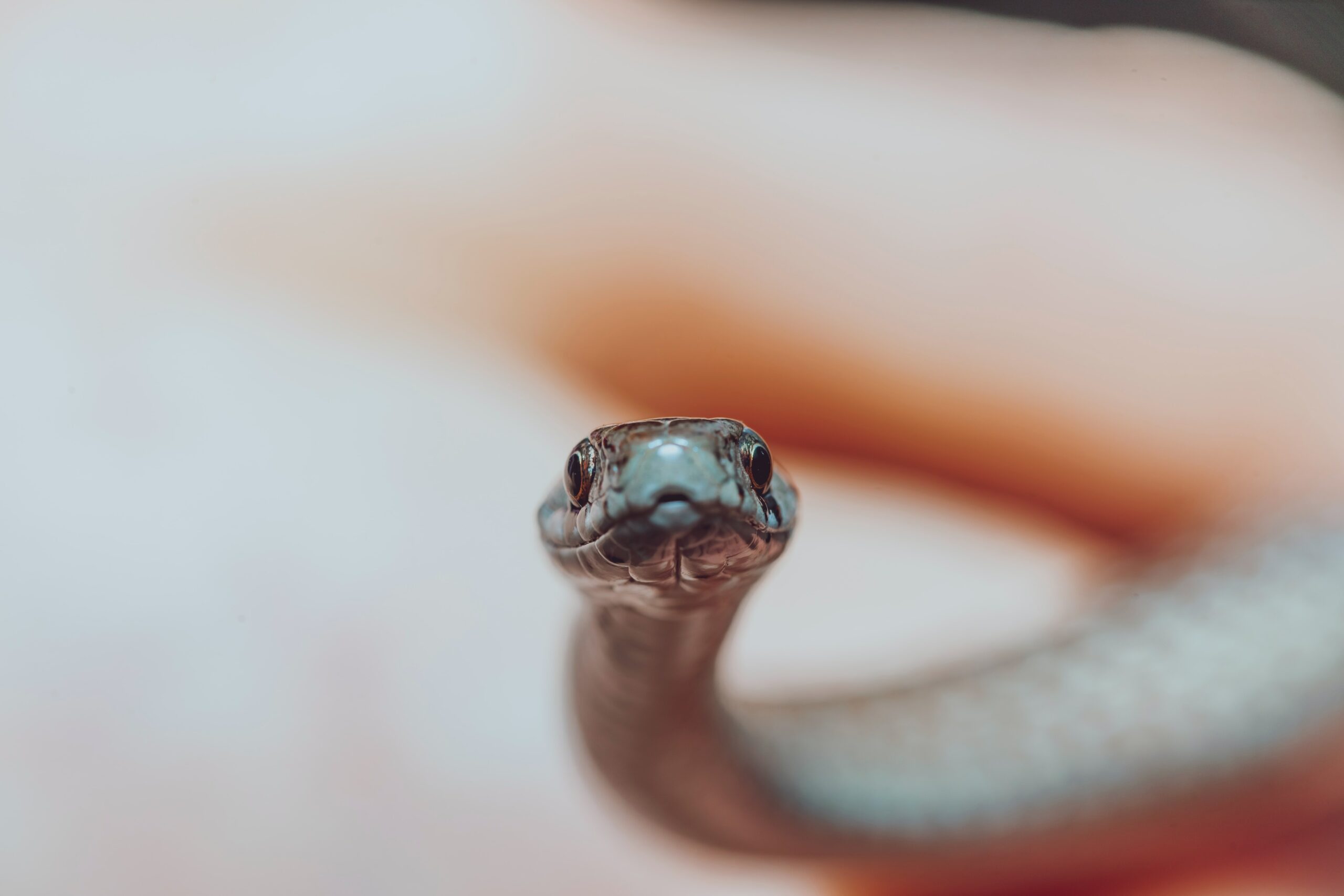 In this blog post, we will find out if a baby snake can bite you and what to do and NOT to do if you were bitten by a snake. We talk about antidotes, how do we obtain them and how do they work.

Can a baby snake bite you?

A baby snake can bite you, so it is recommended not to ignore this aspect. Even though they may look very cute, venomous snake babies can even poison you and cause irreversible damage. Precisely because they are so small, it is easy to lose sight of them. We recommend great caution with snakes, regardless of their age and size.

Just because baby snakes are small doesn’t mean they aren’t dangerous. Young poisonous species (such as rattlesnakes, cottonmouths, and copperheads) are born with fangs. Its venom is as powerful as that of an adult snake. If you try to catch one, they can bite you.

Nonetheless, you have to know what to do if you, someone close to you, or your pet has been bitten by a snake, even if it is a baby snake.

What should I do if a snake bites me?

A snake bite can cause serious health problems. 5.4 million of snakebite cases occur per year and knowing how to react is essential. Many of the actions that we have seen in the movies are, generally, a bad idea.

A snake bite is more likely to cause disability or death if the victim takes too long to go to a medical facility, if first aid has been administered incorrectly or has not received it at all, either because the antidote (if it exists for that specific poison) is not available, it is not affordable or the bite has not been properly treated.

Around 5.4 million snake bites occur each year in the world, causing between 1.8 and 2.7 million cases of poisoning, between 81,410 and 137,880 deaths, and approximately three times as many amputations and other permanent disabilities, according to the World Health Organization (WHO).

This entity emphasizes that poisonous snake bites can constitute medical emergencies due to severe paralysis of the respiratory muscles, cause life-threatening bleeding disorders, cause irreversible renal failure or serious local destruction of tissues that cause permanent disabilities and amputation of a limb.

Besides, it indicates that the effects are usually more severe and rapid in children than in adults, because they have less body mass.

To prevent, as far as possible, these damages, it is necessary to react appropriately after the bite.

The first aid for snakebite cases is based on immobilization!

The arms of the affected person are tied to her torso and her legs are tied together at the knees and ankles. This can be done with bandages or any available fabric cut into wide strips, applying only enough pressure to prevent unnecessary movement of the limbs. Splints can also be used.

The key is to carry out an effective immobilization and take the victim to a health centre without wasting time.

Whenever possible, any information about the incident such as the time of the bite, the signs and symptoms (pain, swelling, nausea, vomiting, slurred speech, etc.) and when they occurred, as well as first aid should be noted and provided to the health personnel.

What you should NOT due if a snake bites you

Instead, there are other actions that we must avoid as they will only make the situation worse.

Thus, after a snake bite, we must try not to panic and never try to catch or kill the animal, as that can cause it to bite us again. Nor is it advisable to photograph the reptile unless it can be done quickly and safely.

The wound should not be cut, sucked, or cleaned. Neither apply herbs or other remedies on it nor make tourniquets. The victim should not be given alcohol or any other drink or food.  Exciting substances or beverages that could increase cardiac activity should not be ingested and thus the diffusion of the poison, nor to apply home remedies.

You don’t have to waste time looking for bandages or splints, but rather use what is available so that the patient’s arrival at a health centre is not delayed.

The victim should not be allowed to walk if they can be transferred, for example, in a wheelbarrow.

Regarding how to transport the affected person, you should never carry a victim lying on their back as this can cause saliva, vomit or the tongue itself to obstruct the airway.

Once at the medical centre, health professionals will assess the degree of poisoning.

There are four degrees of poisoning. Grade 0 means there is no poisoning; grade I imply mild poisoning; II moderate and III severe. In both grade II and III it is necessary to administer antivenom.

The antivenom or antidote serum is obtained after a long process. Small amounts of snake venom are injected into domestic animals (usually horses) over some time until the animal’s immune system generates a sufficient amount of antibodies. Then, blood is extracted from them.

The plasma (which is what contains the antibodies) is separated from the red blood cells and undergoes a series of processes in the laboratory, the result of which is to obtain the antidote against the venom of that species of snake.

The antibodies contained in the antidote neutralize the most dangerous components of a certain type of poison. What they do is create a barrier to prevent these components from accessing the parts of the body against which this poison acts.

What should I do if I find a baby snake?

We know the following:

Most snake mothers don’t keep their babies. Some don’t even meet them, abandoning their eggs while they are still developing. A few select species help protect their young, but only for up to 1 to 2 weeks.

Snakes are precocial (their young are born fully developed). Baby snakes have everything they need to survive without the help of their mother. They have built-in instincts to help them hunt and avoid predators. They feed on baby rodents, lizards, frogs and birds, insects, small fish, and eggs.

If you find a baby snake in the wild, there is no need to interfere with it. Baby snakes don’t need your help – they can take care of themselves very easily. It is not the same scenario as if you had found a baby rabbit or kitten without its mother.

Also, we remind you that just because baby snakes are small doesn’t mean they aren’t dangerous. Young poisonous species (such as rattlesnakes, cottonmouths, and copperheads) are born with fangs. Its venom is as powerful as that of an adult snake. If you try to catch one, they can bite you.

The same applies to hunt for baby snakes as it does to search for adult snakes – leave them alone. They will be better off without your interference, and they won’t hurt you if you don’t disturb them.

Also, wild-caught snakes don’t make good pets. They are often aggressive towards humans, and many cannot be tamed even after years of captivity.

In this blog post, we found out if a baby snake can bite you and what to do and NOT to do if you were bitten by a snake. We talked about antidotes, how we obtain them and how they work.

Remember, even if they look adorable, baby snakes CAN bite you. They may be as dangerous as adult snakes, especially if they are venomous snakes. You are better leaving them alone, they do not need your care and your curiosity can get you hurt.

FAQ on Can a baby snake bite you?

Do baby snakes have poison?

Yes, baby snakes can have poison if they are a venomous species. There is a myth that baby snakes are harmless, they represent a bigger danger than their parents do.

Is it worse to get bit by a baby snake?

It can be worse to get bit by a baby snake because people tend to believe these bits are not harmful. Sometimes they are so small, it may look like a simple scratch. However, baby snake bites are as harmful as adult bites!

A baby snake bite may feel like a sting or a scratch. The symptoms that accompany the scratch are dizziness, confusion, difficulty swallowing and breathing – among others.

Can small snakes be poisonous?

Yes, small snakes can be poisonous. Young poisonous species (such as rattlesnakes, cottonmouths, and copperheads) are born with fangs. Its venom is as powerful as that of an adult snake. If you try to catch one, they can bite you.

What to do if a snake chases you?

If a snake chases you, at the beginning you should freeze and wait for it to find an escape route (the snake most likely believes you are going to kill it). Then slowly back away, since most snakes don’t see from afar you will soon be safe.

Nature-reserve.co.za – What to do if you Encounter a Snake in the Bush