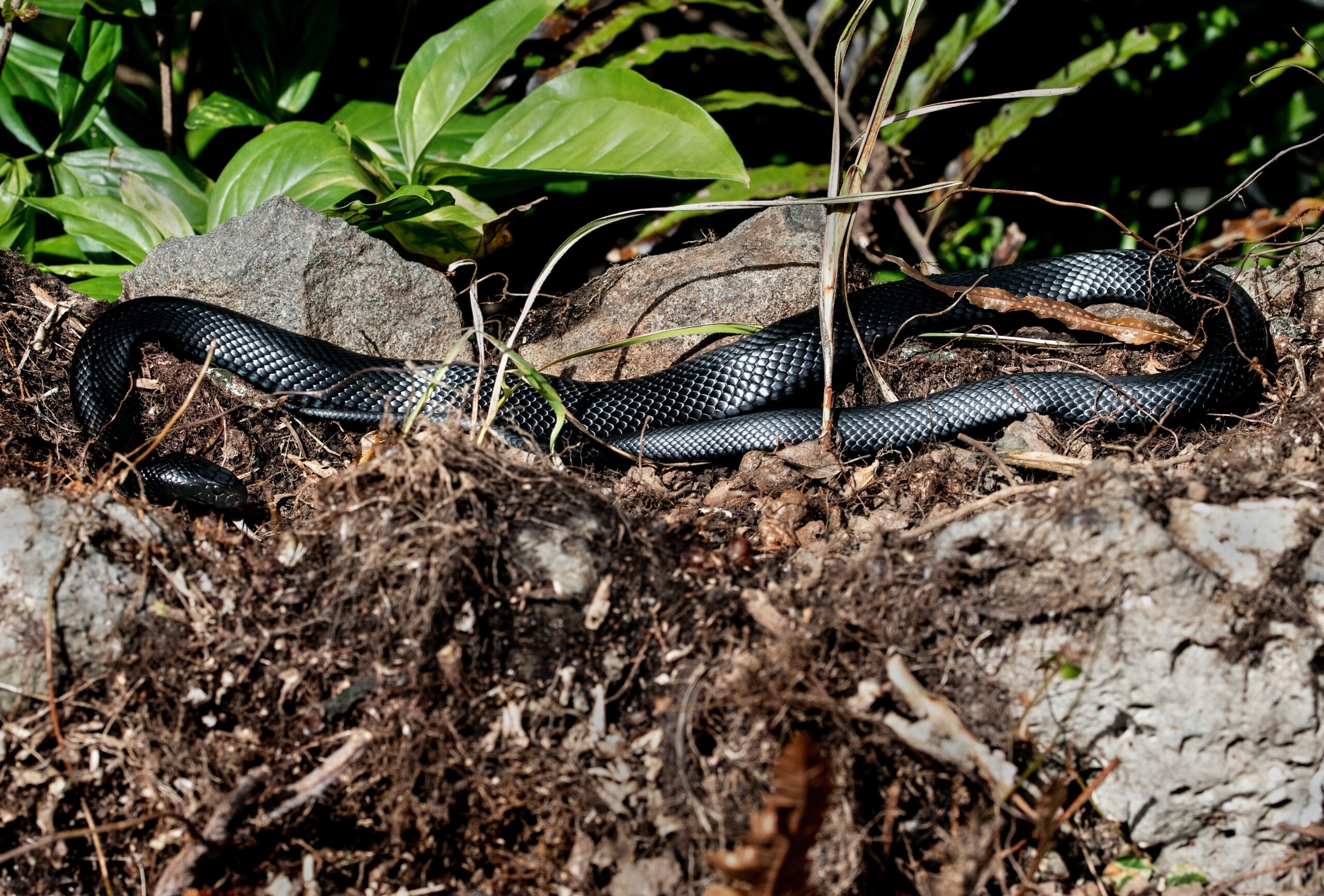 In this article on “Black pepper snake,” we will cover certain features of black pepper snakes originally known as Speckled Kingsnakes. The features included appearance, geographical distribution, diet, life cycle, importance, and other species of kingsnakes.

Black pepper snake is originally known as Speckled Kingsnake and its Latin name is Lampropeltis getula holbrooki. They are 48 inches long and their name is because of the pattern on the body of the kingsnake. There are yellow specks on the black body of the kingsnake. The yellow speck is in the center of every dorsal scale. They are also known as salt and pepper snakes.

They are found in the central and Southern United States of America. The Speckled Kingsnake geographic region overlaps with the Desert Kingsnake.

The black pepper snake likes a wet environment but can settle in the dry environment of grasses and woodlands. They take shelter under rocks and are mostly found in farm places or rocky places.

The black pepper snake kills its host by constriction. They feed on a wide range of hosts like rodents, birds, reptiles, and mammals. They also feed on snakes.

When the black pepper snake is threatened they shake its tail to tell its predator that he or she is deadly as a rattlesnake. They bite or expel feces and musk to threaten their enemies.

This breed of snake is docile and is kept as a pet. They only strike once or twice when captured. They are captive creatures.

The average speed of the snake recorded is between 5mph and 8mph. The average person jogging speed is 8mph. Black pepper snake is not very fast but has a speed of 8mph and when threatened it gives a speed of 11mph in quick bursts. They are not much like racers.

Females lay 6 to14 eggs in the summer season and the young ones hatch in late summer when the temperature goes down. Black pepper snakes don’t like hot temperatures so they are nocturnal in summer, meaning they are active at night while hiding in burrows during the daytime. They are active in spring, autumn, and early summer. They mate in late April and May.

Snake finds its importance in religion. In many religions, stories, and myths they are called healer, killer, seduce, transformer and guardian. They cut down the population of rodents that are injurious to man’s health.

This snake keeps the population of other snakes in check. They shake their tails and throw out stinky musk on their predators. They are also eaten by other predators.

The interesting fact is their fight. You can watch videos on youtube about how different species of the snake-like black mamba, king cobra, and black pepper snake fight.

Other species of kingsnakes

There are 5 species of the genus Lampropeltis which are the following:

They vary in color from brown, tan, and olive to blue-gray. Their bellies are often yellow but other colors like light colors are also seen. Young racers have brown blotches and they disappear as they grow older. Like black pepper snakes, they also find shelter under the rocks.

They hunt in the daytime and are found in bushes, and open woodlands. Their length is from 30 to 50 inches. The food of the black snake is lizards, frogs, and birds. They are fast and move through bushes very quickly and steadily. They often shake their tail like that of a black pepper snake when threatened.

They are found in southeastern Missouri. They replace southern black racers.

They are extremely rare in Missouri. They have beautiful colors and they are like milk snakes except they have a yellow-colored snout and have a white belly. They spent most of their lives underground and fed on reptile eggs and rodents. They are named as scarlet snakes because their back has either red or crimson-colored spots.

They are found in the Southern and South Central parts of the state.

This is the largest and most common snake found in the state. They have black bodies or may have brown blotches. The skin between the scales is red. Their bellies are either gray or checked with black. They are found in buildings near farms, wooded hillsides, and woodlands. They feed on reptiles, birds, and rodents. They kill their prey by constriction.

They have a length of 42 to 72 inches. They are famous because they can climb a tree. Farmers are well aware of its importance as they keep the rodents population in check so that they do not harm the farmers.

They are found statewide and they replace a subspecies known as the gray rat snake.

These are large snakes of around 2 m in length. The record length of this snake is 3.7 m and their weight is around 877 to 940g, but the larger male’s weight is around 2.5 kg. Despite this tremendous length, they are slender, having a diameter of only 4 to 6 cm. They kill their prey by sitting on them instead of constricting them.

They feed on a variety of prey and are found in urban areas. They are diurnal, semi-arboreal, and fast-moving. They are also non-venomous snakes.

Their colors vary from pale brown to black depending upon the habitat they are living in. They are found in the south and southeast parts of Asia.

They are the most common venomous snake found in the state. They have yellow or orange spots on their heads so it is called a copperhead snake. The bellies color is a dusky mixture of tan or black. They are found in hillsides, forests, and buildings near farmlands.

They spent time mostly in bushes and feed on mice, frogs, and lizards. Although there is no death reported because of this snake, yet care is needed.

The length of this snake is 30 to 42 inches. Their cottonmouth name is because they have a white lining on their mouth. When they are alarmed they open their mouth and expose the white line. They are black in color and have darker patterns in case of the dark brown color of the body.

They have the same pattern as that of a copperhead. They have two ranges of habitat. The snakes in Southeastern Missouri live in swamps and lakes and the snakes in Southern Ozarks live in rocky streams and sloughs. They are very dangerous snakes and have a fatal bite.

They are primarily fish eaters but also feed on frogs and lizards. Many snakes are often mistaken for cottonmouth snakes and are often killed.

They are found in southeastern Missouri and widely in Ozark.

They do play dead when there is no way to escape. Black pepper lying motionless depicts that they are dead but actually they are not dead. The one who domesticates kingsnakes does this so that the kingsnake kills other snakes that bring more threat.

What is the fastest snake in the world?

The fastest snake in the world is the black mamba that has a speed of 10 to 12 miles per hour. They are very aggressive and run in short bursts.

Is a black snake with yellow stripes poisonous?

No, necessarily not. Garter snakes are non-venomous and can be kept as pets. They are harmless but some of them do possess small neurotoxin.

Human eyes are allergic to pepper spray but it doesn’t work on snakes because their eyes are covered with a thin, transparent shield that protects their eyes from spray. If you put black pepper in a wooden spoon on a black pepper snake it won’t help you to get rid of the snake.

How can you tell if the snake is poisonous?

After reading this article on “Black pepper snake” the reader will be able to know the habitat, diet, and other characteristics of this snake along with the importance and information about other venomous and non-venomous species of snakes. The reader will be able to distinguish between a venomous snake and a non-venomous snake depending on its characteristics.

Feel free to ask anything about “Black pepper snake” in the comment section below.

No, speckled kingsnakes are non-venomous snakes and they can eat rattlesnakes and copperhead without the fear of their venom. They are famous for their immunity against the venom of pit viper of the United States of America.

What kind of deadly snake is often mistaken for the harmless king snake?

Coral snakes are deadly and are mistaken for harmless kingsnakes. Kingsnakes are often killed because of this reason. Coral snakes have red, black, and yellow stripes on their body.

Your kitty is fearless in front of kingsnakes, corn snakes, garter snakes, gopher snakes, and many other types of snakes.

Kingsnakes have very small teeth and their bite is generally harmless to dogs. However recent studies reported that they have some venom to stun their prey for consumption.

Are king snakes good to have around?

It is good to have a kingsnake around because it can kill a variety of harmful creatures and can keep you safe from these creatures. They love to roam in daylight but when the temperature rises in summer they become nocturnal.

Should I kill a king snake?

It is not wise to kill a king snake because they kill small harmful creatures and keep you safe from the rattlesnake which is a venomous snake and can kill human beings. These snakes are already declining in number so you shouldn’t kill these snakes as it would also disturb the natural ecosystem.