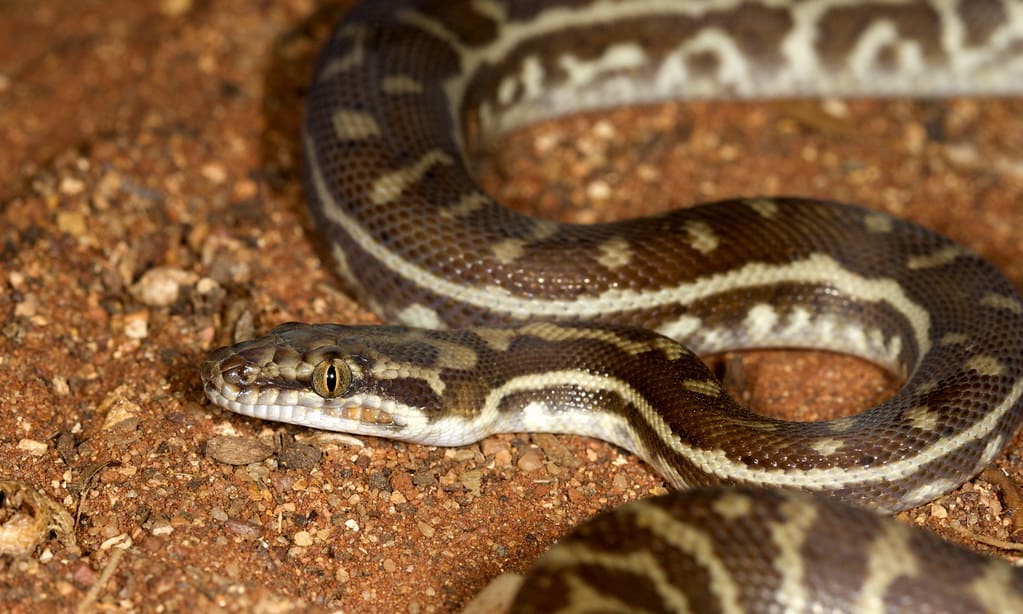 In this article, we answer the following question: Are Stimson Pythons aggressive? We talk about the moments when your Stimson Python may become aggressive and how to avoid these situations. We also discuss the consequences of having a python as a pet and safety rules for handling snakes.

Are Stimson Pythons aggressive as pets?

Feeding time is the most dangerous moment for being close to a snake. Although Stimson pythons are not aggressive animals, they are very greedy for food, and often rush and strangle potential prey that is too large to swallow.

Due to poor eyesight, snakes identify prey almost completely by smell, so they can easily confuse their food and the owner. For a snake, if you move around and smell like food or the smell is just next to you, you are probably food.

The hunting instinct is mostly a reflex, and the snake, deciding that you are potential food, will squeeze you and kill you before realizing that it cannot swallow. When the snake realizes its mistake, it will be too late for you.

Almost all fatalities involving large snakes are the result of unsafe feeding.  Because of this, great care should be taken to keep the snake from getting confused while feeding.

Never approach a snake after touching any potential food item (dead or alive) or if the animal is nearby. Any warm-blooded creatures such as dogs, cats, rabbits, birds can awaken the hunting instinct of a snake. In general, you should avoid any prey animals, and large snakes should only eat pre-killed food.

Dead food animals should never be picked up with bare hands. Instead, tweezers or long-handled tongs should be used to offer food from a safe distance. It is also a good idea to wash your hands before picking up a large snake to remove any potential food odours from them.

At this stage, the breeder can learn to work with the snake and avoid “Foolish Feeding Mistakes” as long as the risks are only a few bites and bleeding wounds. Snakes that are regularly and appropriately hand conditioned from early childhood are less prone to nervous and defensive behaviour in adulthood.

Some experienced breeders suggest to regularly move the snake from the cage for feeding, citing the fact that if the snake is always fed in the same room, it will develop a conditioned reflex that connects the opening of the door and food, which is why it can “go hunting” everyone time when the door opens, and attack the person.

However, feeding in a different cage is not suitable for very large snakes that should not be approached unnecessarily and certainly not when the snake is hungry. Erroneous snake attacks can usually be avoided by using long-handled feeding tongs and not allowing food odours to remain on your skin or clothing.

Most large snakes wrap around and squeeze the body of an object if they perceive it as a potential food item. In self-defence, they will dig in their teeth like any other snake.

A bite is a very painful affair and shouldn’t be joked about. Besides, after the snake has rushed and bit, the hunting instinct can turn on, and it will begin to wrap around you, especially if you start to resist. Summarizing the above, several simple but vital rules can be formulated that must be followed by breeders of boas and pythons.

1. Never hold a snake when you are alone indoors.

2. Never approach a snake if there is a prey smell on your skin or clothing, or if it is near you.

3. Never allow the snake to move freely around the area where people are.

4. Always keep your snake in a securely enclosed room only accessible to you.

Many municipalities have already banned the keeping of any snake over 2.4 or 3.0 meters. In some of them, it is forbidden to own a python or a boa constrictor of any kind, no matter what size it reaches.

The problem of domestic snakes attacking their owners, however, should be considered in the general context of keeping animals at home.

Having  a Stimson Python as a pet

Having a python as a pet, a reptile that can grow excessively, carries a great responsibility towards oneself, your family, neighbours and the pet itself.

No kidding, the python as a pet is a latent danger that should not be ignored.

All animal species have characteristic features common to each species. But then there is the particular idiosyncrasy of each specimen. A meek animal can have a bad day because it feels bad, uncomfortable, hungry, in the heat … Just like the rational human animal. Even like humans, there are animals with permanent bad character.

But, the truth is, I’d rather face a thousand times a parakeet that ungratefully tries to peck my fingers through the bars of its cage, than a meek, well-fed five-meter python that has only one bad day. Size always matters.

Incidents with pythons and other constrictors

The web is riddled with horrific incidents, accidents and catastrophes between people and large constricting snakes. Examples:

The python escaped through a hole in the ceiling, slipped through vents, and reached the room where the children slept. He fell from the roof and killed two children. A terrible catastrophe. This happened on August 7, 2013, in Canada. The snake was an African red python about 5 meters tall.

Every time an incident like this happens, it carries with it serious negative consequences for reptile lovers. The fear and misunderstanding that already surrounds reptiles (and their owners) is intensifying, the authorities are getting more and more opportunity to pass thoughtless laws to “do at least something” about this problem.

The problem of being killed and attacked by domestic snakes is growing very slowly but steadily. From 1978 to 1988, according to the American Federation of Reptile Lovers, four deaths of owners were recorded due to the fault of snakes, one of them due to the fault of the tiger python, the rest of the reticulated ones.

An inspection of the New York Times filing from 1970 to 1992 yielded only one report of python deaths. In the next five years, however, at least two people died and many attacks were recorded, all due to the fault of the pythons.

This appears to be a direct result of the popularization of domesticated pythons. An inexperienced breeder and a large, potentially aggressive snake make a dangerous combination.

Sad but true – many thousands of newborn pythons have been bought from pet stores, and most of the buyers are people who have no experience with snakes and are not ready to deal with them when the pythons have reached a significant size.

Anyone who deals with large boas or may get such an opportunity in the future should be aware of all the precautions that are necessary when keeping these snakes. These rules must be worked out to the point that it becomes second nature to follow them.

Regardless of what you may hear, pythons are not suitable for beginners and you should not take them until you have successfully kept snakes for several years.

The terrarium should be locked at all times, and if possible, stand in a separate locked room in case the snake escapes. For very large snakes, a separate room can be set aside, or the dressing room can be adapted for a snake dwelling.

They must always be securely locked. Remember that boas and pythons can squeeze out the window or glass of the terrarium and escape. Under no circumstances should you be allowed to move freely in the room where people are.

Some rules must be strictly followed to safely contact the snake. While most boas and pythons are not aggressive, they are potentially deadly animals whose strength and power must be considered.

Never attempt to handle a large snake (2.4m or more) alone. This rule even includes everyday tasks such as changing water or cleaning the terrarium. As a rough guide, it is recommended by experienced breeders that when handling a snake, there is one person for every 1.5m of the snake (and for every 1.2m for the faint-hearted or aggressive species like the reticulated python or anaconda).

In this article, we answered the following question: Are Stimson Pythons aggressive? We talked about the moments when your Stimson Python may become aggressive and how to avoid these situations. We also discussed the consequences of having a python as a pet and safety rules for handling snakes.

As a general rule, Stimson Pythons are not aggressive unless they have a reason to do so. That is, you should be very careful while feeding your pet snake. Feeding time is the most dangerous moment for being close to a snake. Although Stimson pythons are not aggressive animals, they are very greedy for food, and often rush and strangle potential prey that is too large to swallow.

FAQ on Are Stimson Pythons aggressive?

Stimson Pythons are good pets for beginners. They are amongst the easiest pythons to keep. However, this doesn’t mean that you can neglect them or overlook the facts that they are still wild animals and predators.

Stimson Pythons are as dangerous as any other non-venomous snake. Its bite hurts and it can represent a danger for anyone who doesn’t know how to behave around them.

Yes, pythons can be aggressive and usually are when they are hungry. If you do not know the rules about feeding your snake pet, then you are in danger.

How big does a Stimson Python get?

Do Pythons kill their owners?

It happens very rarely that pythons kill their owners, but yes, it can happen. That is if you are not careful while feeding them and your hands or clothes smell like their food.