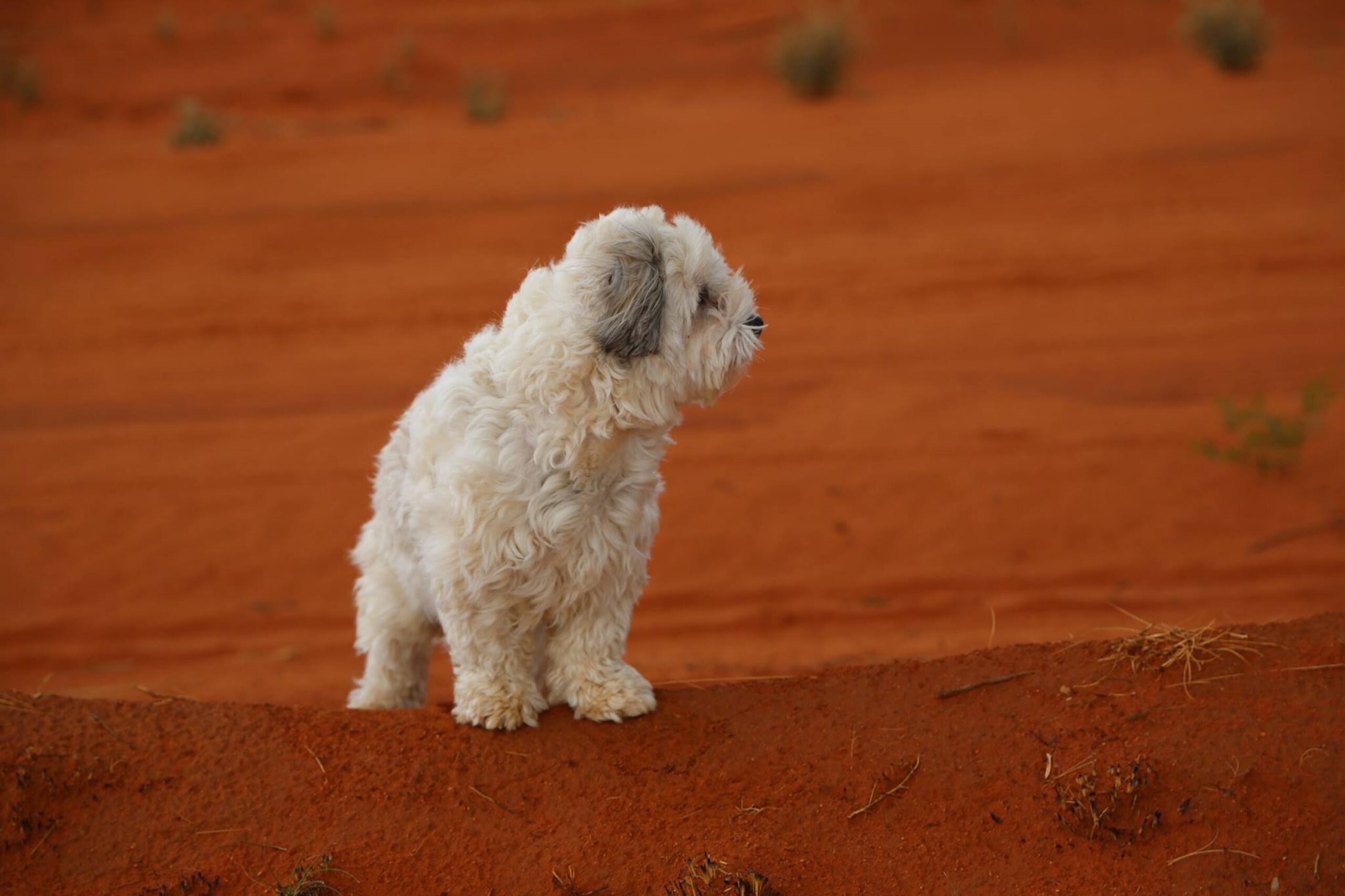 In this blog post, we will discuss whether Akitas are good with cats or we should keep these two pets as far away from each other as possible. We will also talk about Akita’s temperament and personality.

Are Akitas good with cats?

Akitas aren’t always good with cats, and it is not recommended to have both pets in the same house. Akitas and cats sometimes get along, but these dogs have strong hunting instincts and can be unpredictable. Even if they seem to like each other, avoid leaving them alone.

In Japan, where the breed originated, Akitas served as hunting dogs, so there is a strong predatory drive in their genes. They often see cats and other small animals as prey, even when they have been trained to coexist with felines.

Raising an Akita puppy with a cat sometimes works, but with this breed, you can never take peace for granted. This is because some Akitas have attacked cats they have known their entire lives, while others become best friends with their feline companions. If you want to adopt one, ask a rescue organization if they have a good track record with cats.

Remember that no matter how well the animals seem to get along, paying close attention to all their interactions is essential. When you are away from home or cannot supervise them, always keep an Akita and a cat separate.

Akita and the cats outside your home

Never let your Akita run without a leash. If it sees a cat she will detach herself and run after her. Her hunting instinct can also lead her after small dogs, birds, squirrels, and other critters.

If you have a backyard, make sure you have it fenced in with a high-security fence. You may also want to inform your neighbors that your dog has a strong hunting instinct, so they should keep their cats and young children out of your yard.

Food conflict between Akitas and cats

Akitas can be very aggressive if they are interrupted during meals. Your dog needs his own feeders, drinkers, and space to eat in peace. Keep the cat away until the dog has finished eating, you may even need to lock it in another room in the meantime.

Some Akitas are also jealous of their toys. If the cat begins to investigate the dog’s bone or tennis ball, try to divert his attention or separate them for a bit.

Are Akitas good with children?

Akitas can live for 10 to 14 years, so if you plan to have children during that time, or expect frequent visits from nephews and children of your friends, take some of the same precautions that you have with your cat.

Keep children away from the Akita during meals and supervise all interactions, even if they seem to get along. Akitas do not usually have much patience to tolerate pricks, hair pulling, or teasing. Other common children’s behaviors, such as running and yelling, can trigger the dog’s hunting instinct.

The Akita is a grumpy dog ​​often referred to as a “snob”, he does not like overly restless dogs and prefers more exclusive walks with his human.

He is a loyal dog, close to his family, whom he instinctively protects. It is important to socialize well with your puppy, especially with strangers, as these are dogs that tend to be a bit suspicious of them.

Akitas can quickly become dependent on the presence of their family, it will quickly be necessary to put in place a good protocol to teach them to be well alone. This will prevent your dog from suffering from separation anxiety and/or hyper-attachment.

This is not a dog who will obey under duress, he will obey only if he is confident and willing to do so. Choosing an Akita for obedience would be a big disappointment! Dog training methods based on dominance, punishments, and threats are therefore to be avoided!

In addition, it is not uncommon to see an Akita who does not want to go for a walk and who will prefer to rock (lie on the ground still) and watch his master, for the greatest amusement of the neighborhood. . He is a generally calm and rather lazy dog, he likes to spend the day sleeping, but be careful, this is no excuse to deprive him of daily walks, essential for his physical and psychological balance.

He has a noble and proud gait, often imperturbable and he is rarely timid, a real samurai! It is not loud, the majority cannot even bark and almost never make any sounds, except just to communicate (usually with various grunts).

It is also important to know that this is a dog with a strong predatory instinct, like the majority of hunting dogs, it very often reacts to small moving animals (squirrels, birds, etc.). The recall of these dogs is very bad because of its primitive and hunter character, many cannot be walked free despite intensive work.

The majority respect the small animals that cohabit with them (cats, rabbits, etc.) inside the home, but it is necessary to supervise closely at the beginning so that their small companions are not confused with potential prey.

That’s why it’s not a dog for everyone and it’s best to be experienced if you choose this breed of dogs!

Akita: Social interactions and games with other dogs

The Akita’s genetics tend to dislike same-sex peers, so even the most sociable puppy can suddenly change their mind, often at puberty (when the dog is a teenager). This is why the majority of ethical dog breeders will only place an Akita in a family with a single dog of the opposite sex.

With this life companion, he can be playful as long as the other dog is respectful since the Akita is not very tolerant or patient!

Depending on the context and the language he uses, his growls can signify a range of “state of mind”; joy, weariness, going beyond the limits that he tolerates, warnings, etc. It is important to analyze the dog’s situation and signals as a whole in order to understand what he wants to communicate.

The Akita is a sturdy dog ​​with a rounded head, a rather square muzzle and small, triangular, and full ears. They have small round brown eyes, their tails curled over their backs. The coat is double, with a hard, straight overcoat and a thick, soft undercoat, leading to two heavy sheds per year. Long hair is possible and non-standard.

Their coat never has a dark mask and can be red, sesame, brindle, or white, with a white expanse (called urajiro) covering the belly, neck, muzzle, and inner lapels of the legs, sometimes under the tail as well.

It is often confused with the Shiba Inu, which is however much smaller.

The American Akita is 61 to 66 cm for a female and 66 to 71 cm for males. However, it is more massive and heavy, with a weight ranging from 45 to 65 kg. Their coat has a black face mask (except for solid white ones) and all coat colors are permitted, with or without variegation.

The perfect family for the Akita

The Akita will prefer a quiet family that will offer her walks that are neither too long nor too strenuous. It does not tolerate heat well due to its dense coat, it is more comfortable in cool weather and particularly loves winter. If you are cautious, he will be very unhappy!

He is a dog that is not very active, he often prefers to sleep rather than play sports, however, this is no reason never to take him out, a minimum of daily physical exercise is in order.

It is not a sporting dog and by its temperament, it very rarely lends itself to canine disciplines in which it will not see much interest.

Due to the shape and weight of his bones, he should never do dog pulling sports, which could be very uncomfortable for him and even injure him. Given his character, he will prefer to be the only dog ​​in his family or in a duo with a dog of the opposite sex.

The Akita Inu is a breed of dog that, due to its past as a hunting dog and defense and attack dog, presents a loving, faithful, and very protective character with both its owner and his family.

He is suspicious of strangers but will never attack for no reason, he will simply be on the alert. Adults should always supervise dog-child interactions and this is especially true with this breed. No child could have a more loyal playmate or caretaker than an Akita, but a poorly educated Akita can become a great responsibility and even endanger the lives of minors.

It is therefore imperative to teach young people to be respectful and kind in all their interactions with dogs. Play between dogs and children should always be supervised, even with well-trained dogs.

FAQ on Are Akitas good with cats?

Akitas can kill cats or any other small animal, as they often view them as prey. Akitas are innate hunters and notoriously jealous of other pets in the house. They can have disruptive behavior and can quickly become aggressive.

In a way, Akitas are like cats. They are as independent as cats are, like to keep very clean, and are easy to be housebroken. They also like to spend time alone and wander by themselves just like cats do.

What dogs are OK with cats?

The dog breed that is mostly OK with cats is the Beagle, the golden retriever, the basset hound, the Cavalier King Charles spaniel, the pug, and the bichon frise.

Are Akitas really that bad?

Akitas are not that bad, but like any other dog that is not properly trained, Akitas can be dangerous. Also, Akitas in particular are very easy to provoke and almost deadly to smaller animals. You have to make sure you socialize the Akita from puppyhood.