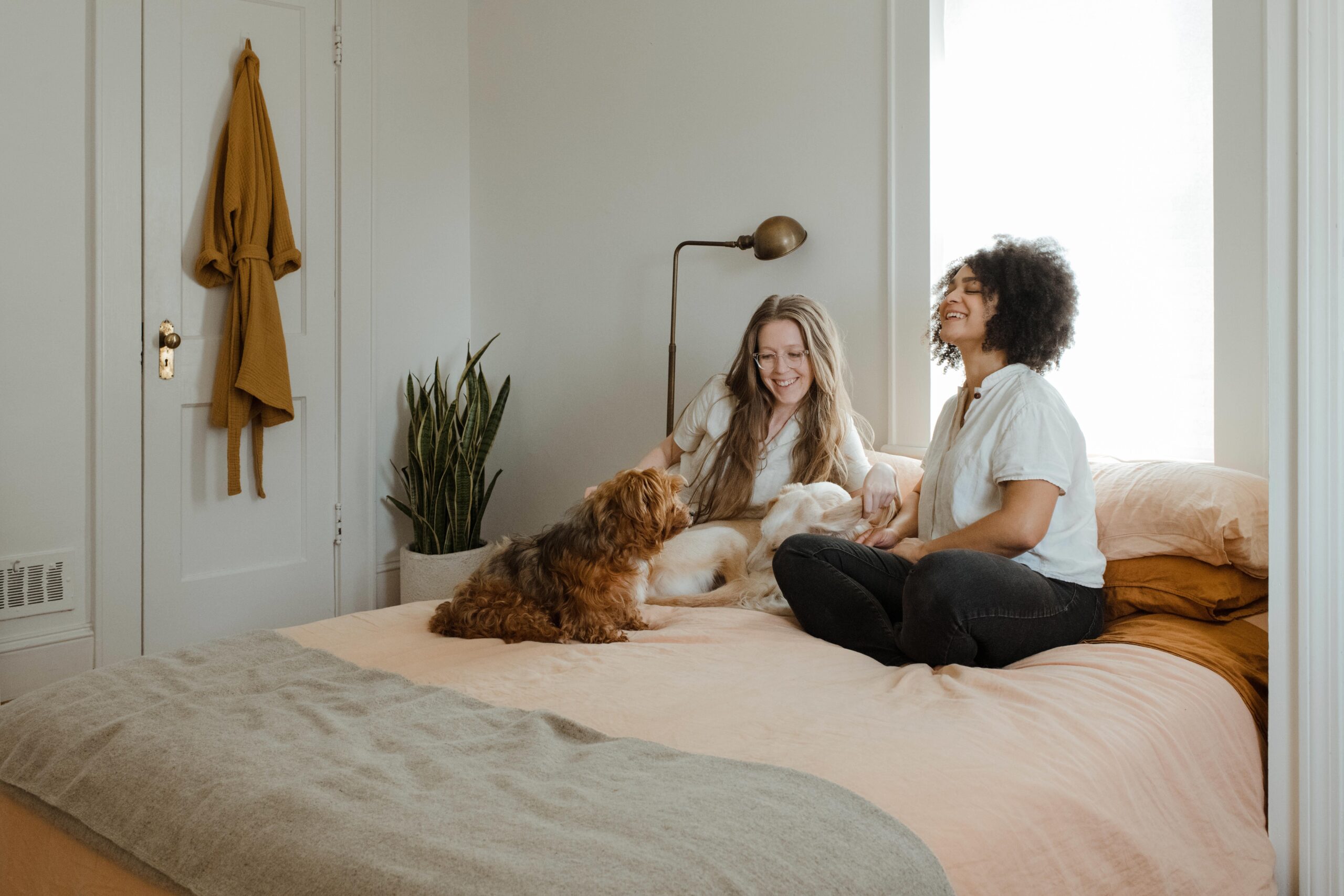 In this article, we will answer the following question: Are Akita Inus affectionate? We will discuss the true character of an Akita Inu; the key points in training an Akita and how to care for it.

Akita Inus can be quite affectionate towards their family members, especially towards their owner. A faithful guardian of his family, the Akita Inu does not back down from challenges and is not easily frightened. However, he is also a loving, respectful, and fun dog when properly trained and socialized.

The Akita has a reserved and silent nature, it will remain impassive in irritating, minor situations. In the relationship with other dogs, it will take the dominant role, it will not seek confrontation unless it has been challenged previously.

He must get used, from a puppy to the relationship with all kinds of dogs and other animals that will live with him, in order to get a fully socialized dog from our Akita. In relation to their owners, they will be loving, loyal, and protective. It will be friendly to people in general unless they show bad intentions.

It is a breed that does not bark unless it has a good reason.

When an Akita barks you have to pay attention to it. In Akita’s character, its protective instinct towards the family and its belongings takes special importance.

It is endowed with a calm and balanced temperament, it is a dog that will withstand the mischief of children with great patience, what is more, it is especially comfortable in the company of the little ones, from whom it will become inseparable and will defend and protect them of any intruder, be it person or animal, even with his life.

Akita Inu is known as a faithful and intelligent dog. Akita Inu can live happily in apartments, as long as they are given exercise. They need to be socialized by puppies. Although they enjoy love and human company, they are not very happy around other dogs. Akita Inu become excitable when seeing their owners, often moving around them.

These dogs are very good with children.

The Akita Inu has a reputation for being an excellent domestic dog. They become great family dogs with proper training and socialization.

The protective instinct makes them especially dangerous with children who may visit the home (they do not tolerate the cries of children playing well), it must be taken into account that the animal must be accustomed to children who enter the home, these dogs when they arrive the home they accept family members as in a herd, new children if they arrive after the dog are strangers to him and you have to get used to them so that there are no problems.

The true character of an Akita Inu

The Akita Inu is a bold and willful dog, naturally distrustful in the presence of strangers but extremely loyal to its family. Always alert, it is an intelligent and brave dog, although it has a tendency to be aggressive with other dogs, especially with those of the same sex.

Due to its character, the Akita Inu feels more comfortable in a home where it does not have to share space with another dog. Instead, he is loving and affectionate with the family, enjoys their company, and always wants to participate in daily activities. In short, for our Akita to be happy we have to make him feel like a member of the family.

It is a dog that can be quite noisy, although more prone to growling than barking. You need a lot of exercises to avoid boredom and destructive behaviors. On the other hand, keep in mind that this breed is stubborn, so we will need a good dose of patience to train it and teach it good canine manners.

Although it is known that adults should always supervise the interactions between dogs and children, in the case of this breed you have to be even more vigilant. No child could dream of having a better guardian and playmate than an Akita, but it is very important to teach the little ones in the house to be respectful and kind to their furry companion, thus avoiding provoking dangerous reactions in him.

Physical characteristics of the Akita dog

The Akita Inu is a large dog that reaches 67 cm in height at the withers (somewhat less in females) and weighs around 35 kg.

Its body has a compact and solid structure, with strong limbs and a thick tail. The image of an Akita Inu in guard position is imposing, transmitting authority and security in equal measure.

The head is round and quite large compared to the rest of the body. Their eyes are almond-shaped, although in the case of the American Akita, that is, the variant of this breed raised in the United States, they have a curious triangular shape. Their ears, always raised, are small and rounded at the tips.

The coat has two well-differentiated layers: the outer, smooth and hard, and the inner, with very abundant hair and a very fine texture. The variety of colors is quite wide and ranges from white and gray to brindle fur, although in Japan white and red predominate.

With proper care and feeding, the Akita Inu can live for more than 12 years.

How to train an Akita Inu?

Proper education is essential for any kind of dog, but it is especially important in this particular case. The training must always be directed by ourselves, as the Akita’s sense of loyalty is so developed that the bond between the owner and the dog could be broken if we leave the task in the hands of a professional trainer.

Generally speaking, the Akita does not respond well to harsh training methods. Respect is required and above all, a lot of patience, because the character of this dog is incredibly stubborn, so much so that it can sometimes make us despair.

However, given your intelligence and fondness for spending time with family, it is worth investing time and effort in proper training that will pay off in the long run: a smart and loving companion with unwavering loyalty.

Necessary care for an Akita Inu

Although it is not a hyperactive breed, the Akita needs daily exercise. Two to three hours of walking a day are usually sufficient, as long as they are brisk walks that include jumping and running. It is not a good idea to take our Akita to a dog park, given its aggressive tendency towards other dogs.

At home, the Akita needs to have a well-fenced yard, both for its own safety and for that of strangers who may enter its territory by mistake and get a good scare. In any case, in the presence of its owners, it is not usually aggressive with visitors. Otherwise, the Akita will be governed by its guardian instinct and will act against everything it perceives as a threat.

Another important care is daily brushing, given the abundant coat of hair so characteristic of the Akita.

Special care must be taken when raising an Akita puppy. These dogs grow very quickly between four and seven months, so they need a high-quality, high-protein diet.

We must also prevent them from force jumping or jogging on hard surfaces until they are at least a year and a half old and their joints are fully formed.

Is Akita an aggressive dog?

In many places, the Akita is considered a dangerous breed dog due to its physical characteristics, such as size, power, and it’s a very powerful and dangerous scissor bite. In addition, this dog has a very marked character, which can sometimes get out of control if its owner does not educate it correctly.

However, the nature of this animal is not aggressive, and it is rare that it has a tendency to bite, unless it is faced with a dangerous or aggressive opponent. Therefore, beyond the character of the dog, its behavior will largely depend on the education that is offered.

The Akita is an affectionate, friendly, loyal, and protective dog, perfect for those who understand it. Taking these details into account, it will be possible to enjoy a balanced specimen without any inconvenience.

The Akita Inu has a temperament sometimes too strong, but that does not mean that the Akita is aggressive. It must be borne in mind that the history of these animals is linked to war since the ancient samurai used them as a fighting dog.

However, the Akita will show a docile temperament when it is educated and raised in a familiar, respectful, and calm environment.

Akita Inus are very intelligent dogs and easy to train. However, they tend to be possessive and highly jealous, so we empathize with the importance of early socialization with this breed.

In its native Japan, the Akita is considered a noble hunter and a formidable guard dog. Originally bred for hunting, the breed is revered for its stealth, nerves of steel, and courage.

Akitas are intelligent and respond well to commands, as long as they are trained with motivation and not by force.

What do you love most about Akitas? Please let us know in the comments your favorite fact about Akita Inu!

FAQ on Are Akita Inus affectionate?

Akitas can be great pets, as they are calm, highly intelligent, and affectionate. However, due to its size and character, Akita is not a dog for everyone.

At what age do Akitas become protective?

Akitas become protective around the age of 12-18 months, as they begin to bark uncontrollably at strangers and seem to want to protect you from everyone outside the family.

Will an Akita protect its owner?

Akita will protect its owner without a doubt. Akitas are generally very calm dogs, but if they bark, there is usually a serious reason for that.